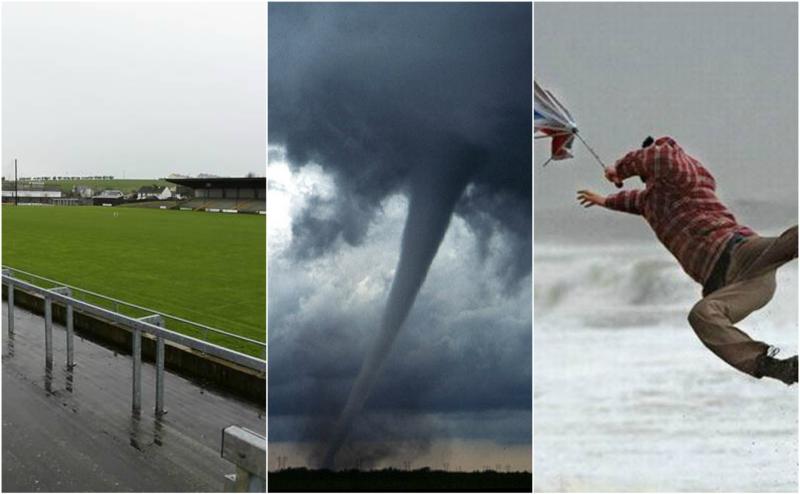 Earlier we brought you the news that a warning had been issued for Ireland, particularly the midlands, with regard to a freak weather event.

Since then, the post has reached more than 20,000 people on Facebook, and despite the perceived serious nature of a tornado threat, however minimal the risk, Offaly people have reacted to the news with typical good humour.

The first jibe was of a sporting nature as Séan O Dubhshláine suggested the possible source of the impending tornado: "That's all the Birr crowd blowing hot air. Bring hurling home!." A beleaguered bride-to-be took issue with the insult, replying, "Excuse you, I'm marrying a Birr man."

Adrian Laffere seemed to think the tornado was going to wreak havoc at work, claiming, "there'll be pallets everywhere," while someone else decided they were going to try and blag a half day from work given the possible destruction on the way.

There was repeated calls for people to tie things down - "Batten down the hatches...tie down the trampoline...secure the decking," and even "tie down the dog," featured as the comments rolled in.

Brian Kearney from Edenderry said, "This has to be a joke. I thought it was Waterford Whispers for a minute" while another spread panic, proclaiming, "this is not a joke, it's serious this time."

A group of golfers had serious concerns: "This will make for an interesting round today, lads," one wrote. They soon agreed on a windswept three-ball nonetheless.

Jocelyn Kenny was clearly eyeing up her friend's motor as she suggested to Dawn Hannon that she'd mind her car if she came to any harm.

A concerned daughter wrote to her mother to "get the clothes in off the line."

Ryan Sweeney went for the old reliable pun, "Offaly bad weather," and finally, despite the rain of recent days, an optimistic Mary O'Neill finally resigned herself to a lost weekend. "There goes our BBQ plans," she wrote.

We really are an Offaly funny bunch!