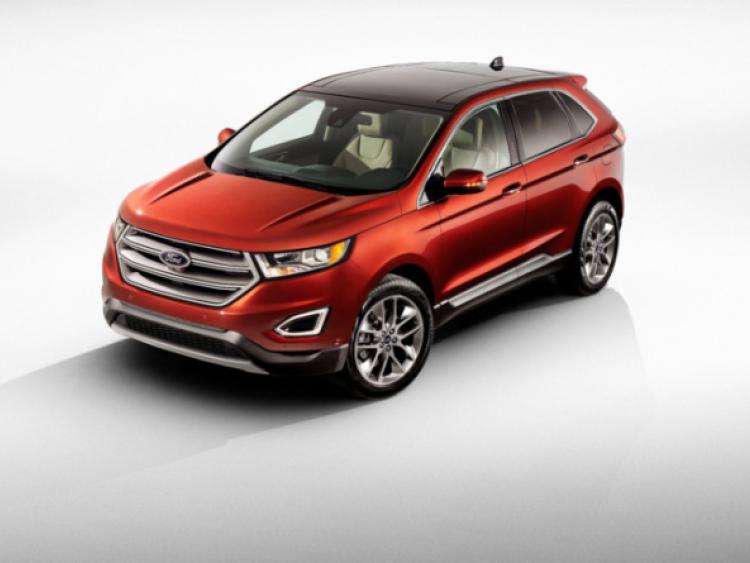 The stylish all-new Ford Edge SUV will help Ford Motor Company target a fast growing SUV segment that has doubled in the past five years.

The stylish all-new Ford Edge SUV will help Ford Motor Company target a fast growing SUV segment that has doubled in the past five years.

Ford today revealed for the first time the production version of the spacious and smart all-new Ford Edge large SUV that will go on sale in 2015, extending a line-up of SUVs in Europe that already includes the new Ford Kuga medium SUV and the new EcoSport small SUV.

According to Ford data, the SUV segment percentage of the total European passenger car market more than doubled to 21 per cent from 10 per cent between 2008 and 2013.

In the first four months of 2014, the SUV share has further increased to 22.5 per cent, and Ford expects the segment in Europe to show further significant growth.

“We believe it is the right time to introduce a larger, more upscale SUV at the top of the Ford portfolio here in Europe.”

Sales of the new Kuga in Europe increased by 38 per cent year-over-year for the first five months of 2014 to 39,700 units, and the 500,000th European Kuga recently rolled off the production line at Ford’s manufacturing facility in Valencia, Spain*.

Nearly all new Kugas sold during the first five months of 2014 were equipped with Ford SYNC, and Ford now is introducing to Kuga, SYNC 2 with voice control and AppLink – technology that enables drivers to voice-activate apps including leading music-streaming service Spotify.

Ford’s latest sales data revealed a high take-up of many of the Kuga’s advanced driver technologies: 60 per cent featured Active Park Assist technology that helps drivers to parallel park, and 55 per cent were equipped with Ford’s Intelligent All-Wheel Drive system.

“Customers have embraced the wide array of technology that is already offered by our new Kuga Smart Utility Vehicle,” de Waard added.

“More than 80 per cent of new Kuga customers are purchasing high specification Titanium models, which indicates significant growth opportunities for an even more upscale SUV.”

Ford’s all-new EcoSport SUV is in European dealerships now, with more than 16,000 orders so far this year.

as already achieved a 37 per cent segment share and is the best-selling SUV in Brazil.

Built on Ford’s global CD-sized platform, all-new Edge was developed from the outset to meet the worldwide increase in demand for SUVs and the customer desires in all regions of the world.

Edge has helped reshape the industry’s definition of a traditional SUV in the U.S. and, in achieving record sales in 2013, reinforced its position as a top-seller in the segment.

“Over the next five years we plan to outpace the industry growth and more than triple our SUV sales here in Europe,” de Waard said. “

More customers than ever before are buying Kuga, we have very high expectations for EcoSport, and when Edge joins them in our showrooms we’ll have a full family of utilities, all leaders in design, remarkable technology, smart features and real capability.”