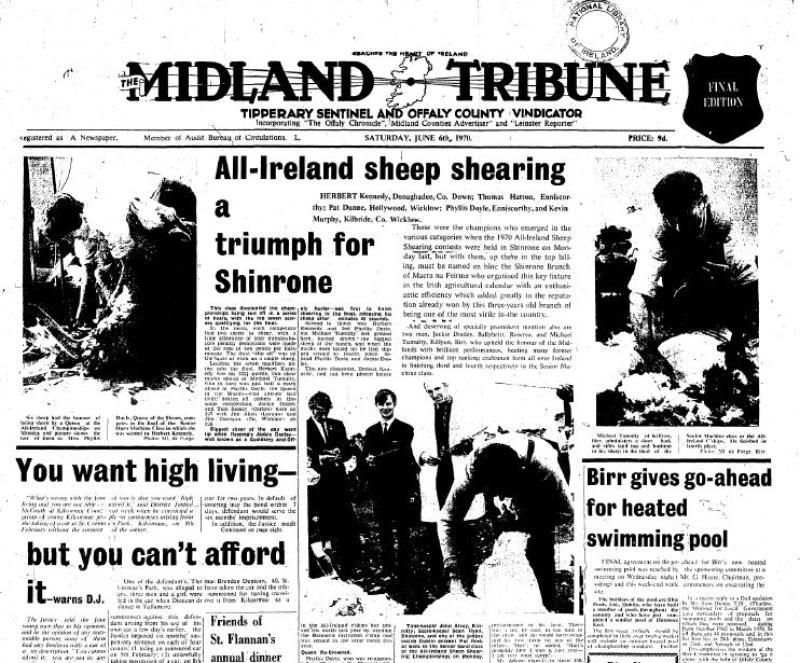 A HALF century has elapsed since the National Sheep Shearing finals were held in Shinrone, an event which attracted over 5,000 spectators and competitors to the south Offaly village on June 1st 1970.

No functions are being held to mark the anniversary due to the Covid-19 restrictions but members of the far-seeing local Macra branch who brought the finals to the county have been reminiscing.

Tony Dooorley, the Chairman of the then fledgling Shinrone Macra group in 1970, was just 21 years old when he oversaw the staging of the finals.

“We were a young, energetic group who had only started up two years earlier, in 1968 following advice from John Fitzpatrick, then an ACOT adviser in the area,” Tony told the Tribune this week.

The event was advertised all over the country, recalled Tony, who added that PRO Sean Ryan secured coverage throughout local and national print media and even on RTE radio and television.

“Peter said we had secured a great opportunity as everyone was listening to the radio for newsflashes at the time about the ongoing Arms crisis,” he added.

He said the newly formed Macra branch was thriving in Shinrone at the time with 45 to 50 enthusiastic young members.

Mr Ryan recalled that weather was ideal on the day and together with the shearing competitions there was a large array of sideshows and stands.

John Carroll, now a councillor who was elected Cathaoirleach of Offaly County on Monday, was just 19 years old at the time but he filled the demanding role of Club Secretary.

“I was the Honorary Secretary, in a time before emails, mobile phones,and when copies of letters was done with carbon paper,” Cllr Carroll recalled this week.

He said that RTE camera crews also visited the sheep shearing site but most of the footage featured on the main evening news was from a ladies football game between Clareen and Shinrone, a side attraction at the finals.

The sheep finals were held in the hurling field, recalled Cllr Carroll while Tony Doorley remembered that sheds had been provided by the Liffey family for use in case of rain.

Mr Doorley said that festivities concluded with a dance in the Marian Hall in Birr to the legendary Ray Lynam and the Hillbillies who were then just emerging onto the music scene.

“On the night the Queen of the Shears was chosen as well,” recalled Mr Doorley.

Geoff Oakley, then a journalist with the Tribune, and the late photographer, Paddy Cotter, covered the event and it featured on the front page of that week's edition.

Part of the front page is published here courtesy of Offaly Historical and Archaeological Society.