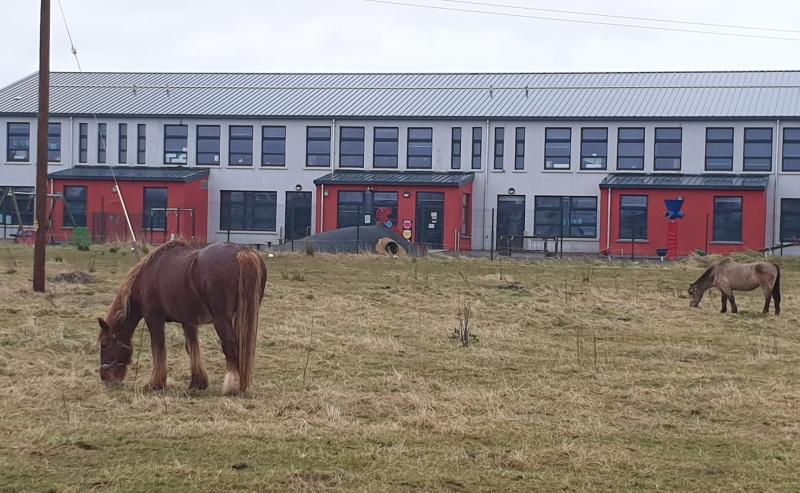 Two horses are grazing on land in an Offaly town which could be used for housing, a local councillor has said.

Cllr Noel Cribbin said the council-owned land, whose location in the Killane area of Edenderry means it is convenient to two schools, should be sold by the local authority for private sites.

Cllr Cribbin said council officials had recently stated during discussions on the county development plan that “they’re trying to cut down on one-off houses out the country”.

“But there’s no sites. You wouldn’t get a site here in Edenderry for love or money,” the Fine Gael representative told a meeting of the Edenderry Municipal District.

“Still the council have large parts of land on the back road that’s just being used to graze a couple of horses.  That’s going on for a couple of years.  It’s a very valuable piece of ground.”

He said there is an issue with parking in the area that had not been resolved but the council should consider selling sites there, in what he said is a “very sought after area”.

“Despite the neighbours up there,” he joked, referring to Cllr John Foley. “I’m only codding,” he added.

He said the land could accommodate about 30 sites which could be sold for as much as €100,000 each to young people wishing to build houses.

If the local authority sold the sites they could invest that income in buying land for council housing.

Cllr Cribbin’s remarks prompted an unusual exchange with Cllr Foley, who said his colleague was “worried” about his horses.

“We can live with that,” said the Independent councillor.

“I didn’t know they were your horses John,” responded Cllr Cribbin.

Cllr Foley said no matter how many houses were built, there would not be enough and he hoped the development of the proposed relief road would resolve the longstanding traffic issues at the schools.

“Today when I was up there to feed the horses, I could see the traffic down the whole side of the road.  Every councillor here and previous councils have been on about that.”

Cllr Foley also suggested that “half” the money being used on advertising campaigns “to tell us how to drive” would be better spent on road infrastructure and the back road in Edenderry was still dangerous, for adults as well as children.

Cllr Foley said positive developments like the 33 new council houses in Blundell Wood needed to be welcomed but also said dezoning could be done in some locations to make more residential land available to the local authority.

The councillors were told by John Cunningham from the council’s housing department that there were many factors at play in the Killane area, including schools, existing social housing and traffic issues, “so any decision that is made there will be in the context of all of that”.

Asked by Cllr Cribbin if that land was a priority for the council, Mr Cunningham said all of the land owned by local authority was being “looked at at the moment” and further land for housing will be sought.

He also reminded the councillors that Edenderry had been the “most fortunate” part of the county in terms of social housing delivery recently.

In his update on social housing provision in the district, Mr Cunningham said the seven-house project proposed for Circular Road, Daingean, is being increased to nine units and planning consent will be sought very soon.

Cllr Liam Quinn, Fine Gael, said the Circular Road might need extra signage if traffic increases as a result of residential development there.

Councillors were further told that four units are planned for Sr Senan in Edenderry and expressions of interest will be sought from builders for turnkey developments.

“We have a few from before, 2019, that are still potential so we are progressing them.  Hopefully they will deliver units.”

Twenty-seven houses are currently being built by an approved housing body in Killane and the council expects them to be delivered “at the back end of this year”.

Elsewhere, in Portarlington and Daingean, there is potential for new social housing from approved housing bodies and private developers.

Mr Cunningham told the meeting that all the long-term voids – vacant houses – had been addressed.

In 2019, 16 vacant units were refurbished for letting, including six which the council purchased.

Last year, the council bought a total of nearly 40 houses in Offaly, and eight of those were in the Edenderry Municipal District.

However, he revealed that the acquisition programme is at an end.

“It’s likely that we’ll see a slowdown if not a complete halt in the council’s ability to be able to acquire houses this year.”

The council now has 467 social housing units in the Edenderry area, an increase on the previous figure and five have been allocated to tenants so far this year, along with seven new Housing Assistance Payment (HAP) tenancies.

Cllr Robert McDermott, Fianna Fail, was told the council inspects 10 per cent of its own houses each year.  “In general we tend to find very compliant tenants and ones that aren’t are dealt with.”

A private inspection company was contracted to inspect private rentals and properties in the HAP scheme.

That company carried out 300 inspections.