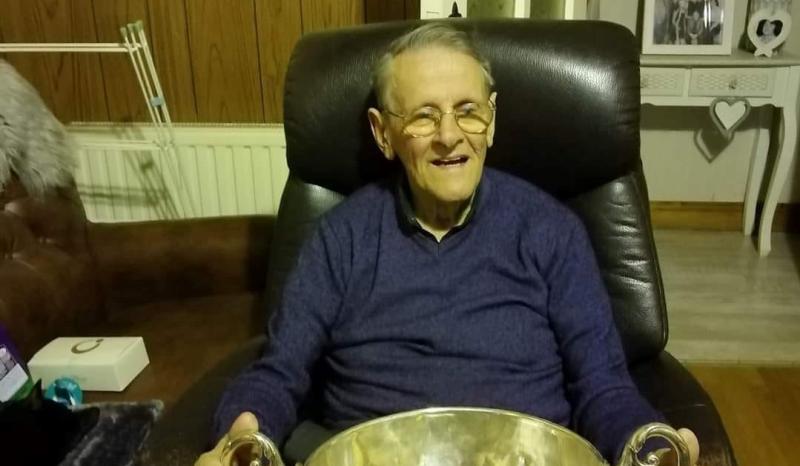 AN era came to an end in Rhode on Saturday with the death of one of the area's most famous and cherished individuals Paddy Kerrigan.

In his 90s, the late Paddy Kerrigan was a giant of life in his beloved Rhode for almost a century. A former ESB employee at Rhode Power Station, he was a real gentleman, held in the highest of esteem in his local area. After retiring from ESB, he did work for Wilker Auto Conversions in Clara, which was ran by family members, and drove for them until quite recently.

The wider Kerrigan family are synonymous with life in village, very well respected and they are particularly closely associated with Rhode GAA Club. His sons and then grandsons continued the groud family tradition of playing for Rhode and managing teams.

Paddy Kerrigan was a passionate, lifelong GAA man and his love for football was infectious. As a player, trainer and officer, he made an indelible contribution to Rhode GAA Club. His print is stamped on a golden era for the club from the 1940s through to the 1970s while he continued to serve his club very well after this.

Considering his love of Rhode and the contribution he made to them, it is somewhat ironic to record that in the wider Offaly area he came to real notice and achieved lasting fame as the trainer of the great Walsh Island team that won six Offaly Senior Football Championship titles in a row from 1978 to 1983 as well as two Leinster club championships – Paddy trained the team with the late P.J. Mahon taking charge of a lot of the other management duties.

That Walsh Island side has gone down in history as the greatest Offaly club football team of all time as it occurred during a golden era for football in the county and Kerrigan made a very important contribution to their great run. At the time, appointing an outside trainer was very much a new departure for Offaly clubs. Nearly all clubs went with local men but Walsh Island decided to appoint Kerrigan as they tried to get a golden generation of footballer to fulfill their potential.

They had a super array of talent at the time but it was still a marriage made in heaven with the players responding well to Kerrigan. When they won the first of their six in the row in 1978, Offaly 1971/1972 All-Ireland senior football winning heroes, Willie Bryan and Murt Connor were still playing – Murt, the oldest brother of1982 heroes, Matt and Richie as well as stalwarts, Willie, Sean and Seamus, went onto win six in a row, starting in all six finals.

Kerrigan's contribution to that team is still remembered with great fondness in Walsh Island and he had the difficult task of training them to beat his own club during that great run, including in the 1978, 1979 and 1982 finals – it was especially difficult as his sons Benny and Martin were playing with Rhode in that era (both played in the 1978 and 1979 defeats but did not feature in the 1982 loss) and he also trained them in earlier years – Benny was on the 1975 senior football winning side while Martin was a very good forward on the U-21 winning team that year. Incidentally both followed in their father's footsteps by training teams and serving as mentors for several years.

That was not a simple thing for him considering his devotion to Rhode GAA Club. As a player, he was a fine underage performer in the 1940s and he was an excellent senior player in the 1950s. He played in both attack and defence and won Senior Football Championship medals with Rhode in 1955 – his brother Mick Kerrigan scored the winning free against Daingean - and 1958. He played one competitive game for Offaly, lining out at corner forward in a 1953 Leinster Senior Football Championship defeat by Wexford.

As his playing career wound down in the 1960s, he embraced his football passion by training teams. It was an era when collective training was becoming accepted having been taboo for most of the earlier decades and trainers and managers were becoming more and more crucial to a side's success prospects.

Paddy Kerrigan was a phenomenally successful a trainer. He cut his teeth with underage teams first and so many great Rhode footballers benefitted from his guidance – including the likes of Paddy McCormack, Eugene Mulligan, Martin Heavey and Jody Gunning who were already establishing or had established themselves in the 1960s as well as young future heroes such as Johnny Mooney, Seamus and Stephen Darby and Charlie Conroy among so many others.

Almost every Rhode player in the 1960s, '70s and '80s was trained by Paddy Kerrigan at some stage. He enjoyed considerable success and helped guide Rhode to the Senior Football Championship in 1966. Invariably he was over a couple of teams in the one year, taking charge of senior and underage sides. Rhode won the Senior Football Championship again in 1967 and 1969 and Paddy was also at the helm when they reached the sumit again in 1975 – he also trained Rhode to the U-21 football title in 1975 but amazingly Rhode embarked on a long 23 year famine, not winning the Dowling Cup again until 1998.

Rhode were very close in the late 1970s/early 1980s but Walsh Island, with Paddy at the helm, proved an insurmountable obstacle and they then went into freefall as Eugene Mulligan retired, Johnny Mooney transferred and then moved away before returning in the 1990s and others emigrated in the early 1990s – they always remained at senior level but there was plenty of years in the late 1980s and 1990s when they were not truly competitive.

His success as a trainer of club senior football teams in Offaly is phenomenal. He guided Rhode to four, Walsh Island to six and it is very doubtful if anyone can match that record of ten. In an interview with Kerrigan ahead of the 1983 county final, it was stated that he had a “difference of opinion” with the Rhode club earlier in 1978 and this meant that he reacted positively when Walsh Island approached him but whatever happened at that time, he returned to them and was a vice president at the time of his death.

While his training heyday was over by the end of the 1990s, that 1998 success sparked an era of unprecedented dominance for Rhode and Paddy Kerrigan was so proud of all those great wins.

There was of course a lot more to him than GAA and he was a devoted family man. He and his late wife Kathleen were a lovely, united couple, always travelling to games together. She was a very passionate GAA supporter and for years, the club jersies and footballs were kept in their house.

He was personable, friendly, sociable and enjoyed travel, visiting New York among other destinations. He enjoyed attending re-unions of the many teams he played with or trained over the years and the respect he was held in was demonstated by the way people sought out his company. Known fondly as Pilot, he always turned himself out meticulously, presented himself well. He enjoyed a social drink and loved country and western music.

His funeral details will be announced later.