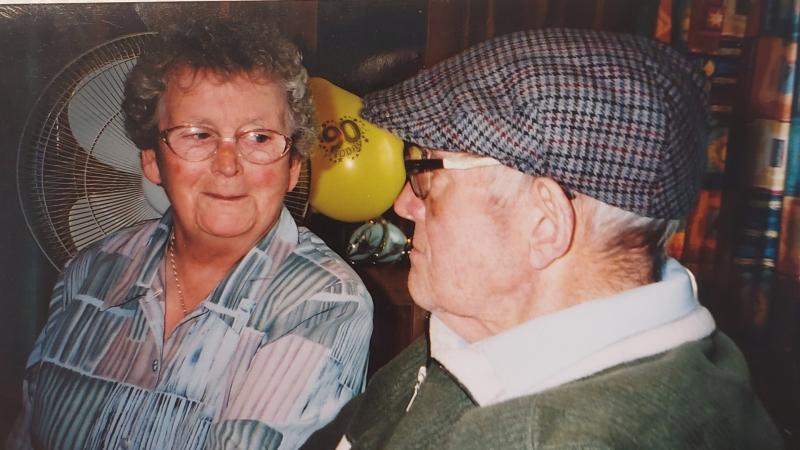 The late Katie Cooney with her brother Patsy Rigney at his 90th birthday party some years ago.

AN era has ended in life in Killina and Rahan with the death of one of the area's most loved individuals, Katie Cooney.

97 years of age, Katie lived a full and remarkable life and it is very poignant that her death follows so soon after another doyen of the area, Sr Oliver Wrafter who was 99 and was only buried this week – Sr Oliver lived just a couple of hundred metres away from Katie and her family in the Convent at Killina for most of her life.

The duo were good friends for nearly all their life and there were very close links between the Cooney's and the Presentation Sisters in Killina. Katie's late husband, John was a caretaker in the Convent but sadly died prematurely young in 1956, leaving Katie with a young family of eight children – their youngest daughter, Jackie was only born a few weeks after John died.

After her husband's death, Katie showed tremendous fortitude and character as she reared her family and it is to her credit that her daughters and sons are very respected, well liked people. It was not an easy time for her and she was only 31 years of age when John died but she was a great mother and did her job very well – the fun and games in the wider Killina area, the weekly Sunday matches , the visits to orchards (both invited and uninvited) etc are all part of local folklore. Katie always did her best to strike the right balance between protecting her children as well as ensuring that they would flourish and grow fully as they and their neighbours went through the various stages of childhood into adulthood.

Katie and her children were always very grateful to Sr Oliver and the Presentation Sisters, who gave them great moral and practical assistance in those testing years.

Nee Rigney, Katie grew up in nearby Agall and moved to Killina shortly after marrying John - one of her brothers, the late Patsy Rigney lived a stone's throw from her on Wood Lane.

She was a lovely, dignified, gentle, reserved, private and personable woman, who exuded decency and respectability. She was a religious woman and her faith served her well – she was the last bell ringer in nearby Killina Church before it became electrified, often taking the candelabra home on the handlebars of her bike for cleaning.

Her death ends an era on Wood Lane. Once the home to just a handful of houses, it has got a lot more built up in recent years. The 1950s and 1960s was a fairly hectic time there as young families of Cooney's, Corrigan's, Scully's and Rigney's grew up within a few metres of each other. The football and hurling matches, and fun and games of all types were not for the faint hearted as young children, all within a few years of each other, tested boundaries and the patience of parents – they were often joined by Corcoran's, and this popular family also moved into Wood Lane near the end of the 1960s, adding to the mayhem and fun.

Katie is the last of those original families to pass away – the Lane also houses the Church, the Secondary School and the Parochial House with the Dunne's reared at the top of it and the remainder further down before it became more built up in the past couple of decades. Many of the original family names are still there with the Dunne, Scully, Rigney, Corcoran and Corrigan families all still having representatives living there.

It is a lovely rural location with the Grand Canal, located just behind Katie's house, the dominant amenity in the locality. Katie was a much loved part of the community, it's heartbeat really. She was a lovely presence there. Even as she went into her 90s and her mobility inevitabily declined, she still loved to get out and about into her garden and go for short walks on the road, meeting and greeting neighbours and the many passer bys who use the road for walks to and from the canal. She took great pride in her own spacious garden and it always looked very well.

She only went into Mucklagh Nursing Home inside the last two years of her life – she was still living there when I bought and moved into my father's home house across the road from Cooney's, where he and his siblings were reared by their parents, Harry and Maggie, over two years ago and the welcome she gave me was very touching and sincere. I used to love meeting her as she came out of her house and she enjoyed the life that came to the area as running friends used Killina as their training base during Covid restrictions – the vicinity of the canal made it ideal for this. I was a Corrigan “returning home” in her eyes and she took a genuine interest in how I was settling into the area and was I happy here.

She was a tremendous family woman and the visits of her daughters and sons were a source of great comfort to her. She lived a simple but very full life and loved her rural environment – looking at nature, cattle etc gave her great pleasure.

Katie represents one of the last of her generation, the final changing of the guard in Irish society as the last people born during shortly after the War of Independence passes away. A generation that have witnessed so many incredible changes, have such stories to tell and she also leaves a treasure throve of great memories.

She will repose in Lawless' Funeral Home, Mucklagh Village (R35 C5P6) on Monday afternoon from 4:00 pm with Rosary at 7:00 pm followed by Removal to St. Carthage's Church Killina, Rahan. Requiem Mass on Tuesday at 11:00 am burial afterwards in Mucklagh Cemetery.