Death of a Kilbeggan athletics and GAA stalwart 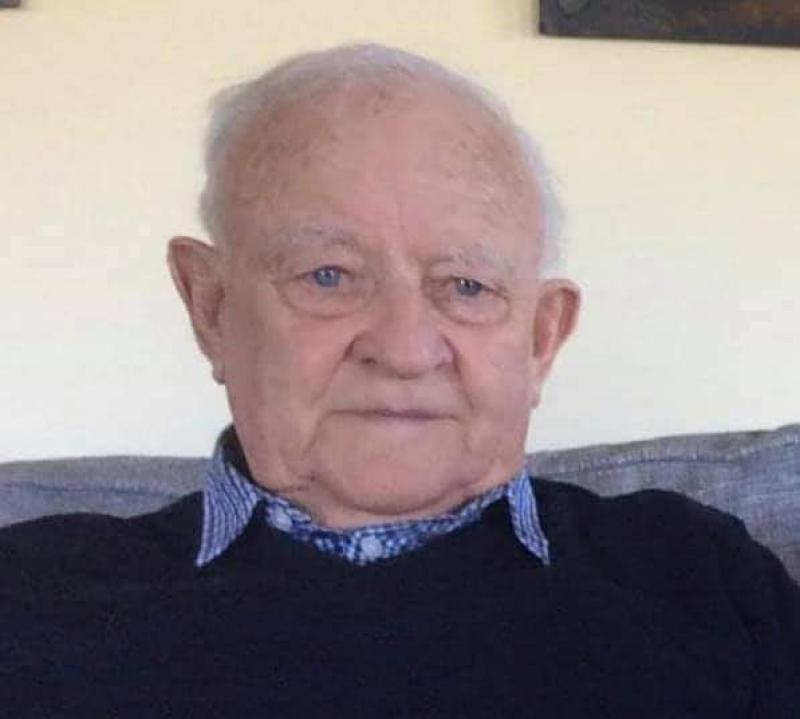 THE death has taken place of a former athletics and GAA stalwart in Kilbeggan. Jimmy McDonnell died at his home in Ballinderry Big, Kilbeggan and leaves a treasure chest of cherished memories for family and the many people who loved and admired him.

A dignified and personable man, Jimmy McDonnell was one of the early members of Tullamore Harriers Athletics Club in the 1950s while he also had a tremendous passion for the GAA.

He played football with Kilbeggan in his youth and after emigrating to New York in 1959, he starred with the Westmeath club there for several years. He played both football and hurling for them, winning a championship in 1963. After returning home to Kilbeggan with his wife Maureen and growing family, he immersed himself in the Kilbeggan Shamrocks Club and was particularly involved in the development of their pitch from the late 1970s.

Jimmy had a great passion for the GAA and in an interview for the Tullamore Harriers' history book in 2018, he spoke with great enthusiasm about football in his youth and the number of Kilbeggan players who played illegally in Ballinamere and Durrow in the 1950s.

He was an excellent runner in his youth and joined Tullamore Harriers Athletics Club in 1954, just a year after their 1953 formation. A number of people from Kilbeggan and border areas have ran with Tullamore Harriers in every era and Jimmy was one of a number of valued members from there in the 1950s.

He posted some very good times and won his share of medals and trophies. A highglight was winning the Leinster 10 mile road race in Enniscorthy in 1955 in 57.30 with a fellow Harriers' member and future national marathon champion, Tullamore's Noel Gowran behind him in third place. He regularly contended in races. In 1956, he was second in a fourteen mile race in Clonlee, Meath in an impressive 1.23.12; he was Tullamore Harriers' senior captain in 1957; and he was third in the Leinster 10 mile road race in 1967 (Noel Gowran was the winner) in 61 minutes.

He was a keen competitor and dedicated trainer. At the time, he was one of a group of about 12 athletes who trained in Noel Cobbe's field in Durrow. They did a lot of runs from between 3 to 6 miles there, mixing it in with the road as they ran from Durrow into the Arden Road or on an out and back route from Kilbeggan to Newtown in Tyrrellspass.

The mileage in training was not as high as many embarked on in later years and he received a big lesson when forced to pull out of the national 15 mile road race in Wicklow in 1956. Training in Cobbe's Field toughened them up after this and a promising running career effectively ended when he decided to go to New York in 1959, staying there until 1966. He did run in New York but never as competitively as in Ireland. He worked in a variety of jobs in New York, mostly in the building industry - “I worked at anything I could get my hands on,” he stated in the Tullamore Harriers' history book.

In 1962, he invited his fellow Kilbeggan man, Paddy Bastic to join him in New York and he trained with him for a period in Van Cortlandt Park in the Bronx. Bastic's story was an interesting one. He was a pivotal figure in the early Tullamore Harriers' history. Bastic switched to them from Kilbeggan AC and ran with the Harriers in 1960 and 1961. However, there was a dispute over the legality of his transfer and after officials attempted to pull him out of the Leinster cross country race in Tallaght in 1961, he and club mates resisted furiously. There was some violence and the upshot was a year suspension for Tullamore Harriers, reduced later to six months. Tullamore Harriers had a great running team at the time but it broke up after that. Their star athlete Mick Neville transferred to Donore Harriers as he couldn't afford the time out of action in his prime while Bastic and others emigrated abroad. In New York, Bastic ran with Milrose AA and finished fourth in the first New York marathon in 1970 – it was nothing like the mass participation iconic event it was later to become and there were just 127 athletes competing on a four lap loop in Central Park. Bastic was third in the 1972 New York marathon in 2.33.42 and he was tenth in 1973 while he had a host of other fine achievements in the USA.

Jimmy McDonnell enjoyed training with him in New York but by now work and family were his priorities. He farmed when he came home and had a deep affection for the land and rural life.

A genuinely nice and engaging man, Jimmy was a good conversationalist and enjoyed talking about current affairs as well as engaging in nostalgia about the past.

Members of Kilbeggan Shamrocks GAA and Tullamore Harriers clubs formed a guard of honour at his funeral on Sunday.

Pre deceased by his loving wife Maureen and his sisters Sarah, Annie, Maggie and Tessie, he was the devoted father of his sons Jim and Brian and daughters Maura, Anna, Deirdre, Eileen and Thérese, sons-in-law, daughter-in-law, loving grandfather to his cherished grandchildren. Jimmy will also be deeply missed by beloved sister Mary Sexton (Miltown Malbay), and his brothers Joe, Johnny, Christy, Davey, Peter and Martin, sisters and brothers in-law, his devoted nieces and nephews, extended family and many friends.