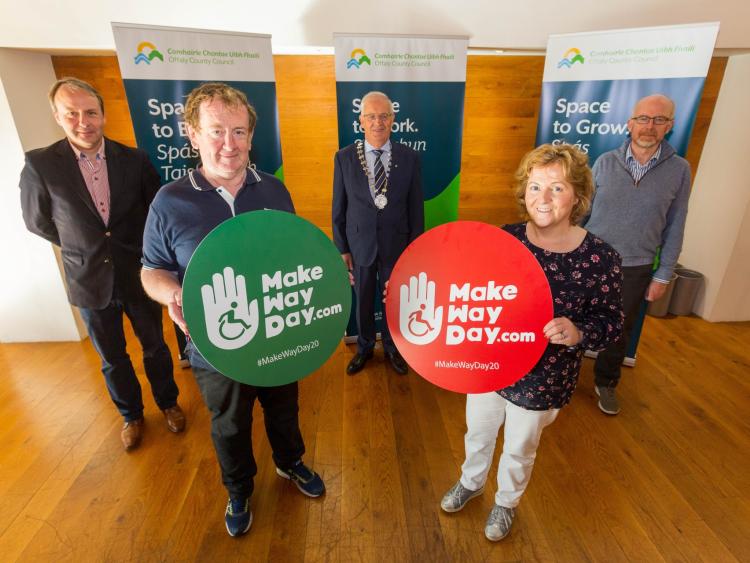 Ray Lucey, back row far right, pictured with other participants in the Make Way Day event

‘Make Way Day’ is an annual event hosted by the Disability Federation of Ireland (DFI) in many locations throughout Ireland ‘A National Day of Local Action’. This event is a national public awareness campaign to highlight the issues people with disabilities face getting around their communities. “Hey, this blocks my way!” is the message.  This year due to Covid-19 the campaign moved online.  The event goes viral every year and in 2020 more so as it trended as no. 1 on Twitter on the day! #MakeWayDay20

Make Way Day was supported by all 31 City and County Councils in Ireland in 2020. DFI encouraged virtual meetings where you can get involved with other disability and community groups within your county to work with the council to take action on access. The aim was to have this great national debate on local access issues. The intention of this online version of the event was to collapse the distance between people and offer solidarity to people with disabilities who continue to be affected by the COVID-19 to create a sense of community and belonging for people involved.

So normally around this time each year the Offaly Disability Equality Network (ODEN) conducts audits in villages in towns throughout the county to highlight obstructions and issues that hinder the mobility of local residents with reports submitted to the relevant local authorities. However during these unprecedented times ODEN hosted a novel event on September 25 last at the Council Chambers in Aras Chontae in Tullamore with some ODEN members and other representatives were in physical attendance with others participating via Zoom. Mary Stones (ODEN Chairperson) opened the meeting with an illuminative video highlighting issues from the streets of her hometown of Clara, as pictures paint a thousand words. Collaborative links were strengthened between County Councillors, Declan Harvey and Danny Owens with Cathaoirleach John Carroll, Offaly County Council staff, Offaly Local Development Company, statutory agencies, business owners and volunteers.

The Mission Statement of ODEN is ‘To inform and support people in identifying barriers to accessibility and inclusion in communities’ and with this common goal members pledge to enhance the lives of Offaly citizens with a disability and their families. During a wide ranging discussion about the 2019 Make Way Day reports for Tullamore and Clara it was agreed much progress has been achieved since last year. In particular O’Connor Square in Tullamore was highly commended as a fine example of urban regeneration in a provincial town centre making life easier for all with Offaly County Council welcoming feedback on how it’s being used. Tom Milne (ODEN member) acknowledged that recently there has been “an explosion of everyone using outdoor space in order for businesses to survive and that is understandable.” However after a recent visit to the area raised some serious issues. These included the road up from the Tanyard being not particularly well marked out so locals and visitors could experience some uncertainty with this present layout. Another issue was street furniture and how it is managed by local businesses, “ a very encouraging development but I think we need the council to consider that if street furniture is being placed there under licence some identification needs to be there to show it.” For wheelchair users in particular Tom said they “have awful difficulty with sandwich boards. Absolutely a death trap for somebody in a wheelchair” with him citing a horrific example of an incident involving one locally. He takes serious issue with the constricted access to public footpaths and business premises and the lack of care in the placing of commercial wheelie bins. To illustrate his point stronger he continued, “ They should put a sign up ‘Cripples Not Welcome’ it’s terrible to say but thats the sign we see all the time. We’re not welcomed, we’re not encouraged.” As regards the involvement of Offaly County Council with such issues and solutions to them he said, “If you guys get behind us we can solve this and I can go for my cup of coffee like everybody else.” In response to the ongoing commercial wheelie bins issue Brian Pey (Offaly County Council) advised that it is within the responsibility of OCC “to make sure they are not a hazard to pedestrians or any other traffic. So if the Environmental Section is made aware or people can follow up issues with the companies (waste collection providers) or contact the Waste Permit Collection Office (OCC).”

Bridie Costello Hynes (Offaly Public Participation Network and ODEN member), told all, “Clara has been earmarked as a pilot project and what that would incorporate is universal design is terms of age friendly and disability, particulary in relation to public realms, that would be footpaths and other areas of access, an issue for everybody. We are planning to work with businesses to encourage an age and disability friendly ethos.”

Dog Fouling is a major issue throughout County Offaly and Stephen Keogh of ODEN gave an update, “After last year’s Make Way Day everyone gave their reports in about the areas they went to and all came back with the same issue-dog fouling. What ODEN took this on as a group we researched the issue, what the problem was and we asked what could we do? I was lucky enough to get an internship with the Offaly Local Development Company and Siobhan Broderick (OLDC SICAP Team Leader). I was able to research the problem of dog fouling in Offaly and publish an article in the Tullamore Tribune which highlighted this issue.” Subsequently the ‘Green Dog Walkers’ initiative was proposed with personal responsibility of dog owners and dog walkers directly involved. Stephen continued, “I was able to present it to Offaly County Council in early March and which they were grateful for but with Covid 19 we bide our time and wait for feedback from the council.” Declan Costello (ODEN and Community development Worker OLDC) confirmed that Offaly County Council “has agreed in principle to go with the Green Dog Walker initiativein the county.” Siobhan Broderick (OLDC) via Zoom elaborated on the availability of bag dispensers and bins to support this worthy essential initiative and “the consequences and impacts for communities if they are not present.” Bridie Costello Hynes (Offaly PPN) added, “We certainly got great feedback with some of the villages and towns involved and linked to the Environmental Section of the council to get orgaganised with bins and dispensers. We found there was ahuge number of areas where people are interested and particularly with the Tidy Towns groups.” Tullamore Tidy Towns has pledged support and the Dog Warden (Offaly County Co.)

Roger Guiney, President, Tullamore Chamber of Commerce, said, “the grace and favour of Offaly County Council needs to be returned by business. There’s education as well-where somebody from ODEN could help us educate the businesses.”

Declan Costello (OLDC/ODEN) at the meeting closing put it succinctly that all issues discussed concern all members of our communities. In that regardless of disability or not we are going through life’s course and may be affected by them eventually.