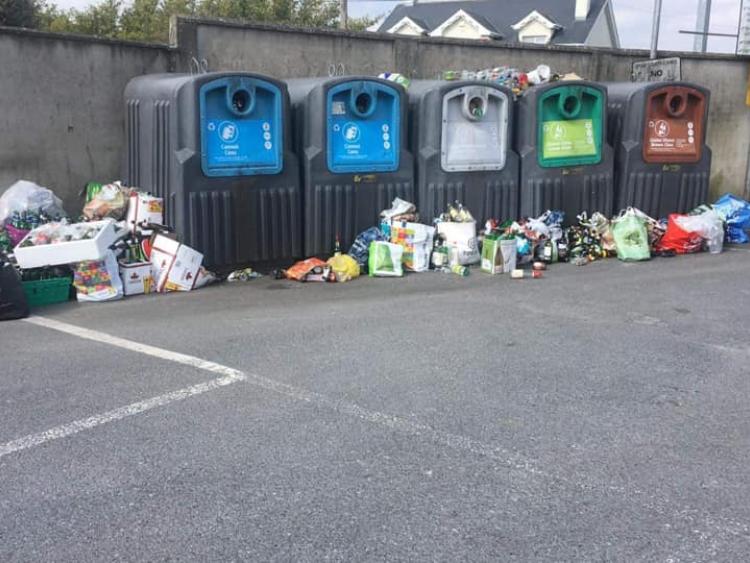 Instances of illegal dumping both in the countryside and at bring banks continue as local councillors voice deep concerns about rubbish being dumped in isolated rural locations and at bottle banks during the Covid-19 pandemic.

Speaking at the monthly meeting of Birr Municipal District, Cllr John Leahy again pointed out his recent calls for audio at bottle banks rather than signage. “Signage is probably wasted and in fairness, it's like shooting fish in a barrel when you find someone, who has left rubbish or their belongings behind at a bottle bank because it was full. I think this is very unfair where we have a situation where we have someone going down the road dumping stuff and there's no consequences because you can't catch them.”

Regarding the issue of illegal dumping, Cllr Leahy asked whether the local authority could consider putting a call to action on social media identifying places “being used for dumping” and asking people if they have information to contact the council. “There are people out there, who are willing to report that we didn't have years ago because people didn't want to do that. People will keep an eye on these black spots and if they see someone dumping they might just take out the phone and get a snap and we might just catch one out of it. We need some call to action and we need the council to take it in some sort of a way.”

Cllr John Carroll said how it was brought to his attention that people were bringing material to the bring and bottle banks and they weren't “even try and put it in and are just leaving it there”. “They only way we can overcome this is by cameras or something like that. I think for our blackspots, we need to something to try and pin down these spots.”

Cllr Carroll mentioned an incident recently on the Banagher side of Birr, along the road where televisions and beds were dumped where some of the stuff could have gone straight to an amenity centre at no cost to the person. “But, yet they could bring it out the road and dump it like that. Yet, they couldn't go the extra mile to the centre. This is a major issue and I think we are handling it all the time.”

Cllr Peter Ormond maintained the bottle banks were “working pretty well” over the last couple of months. However, he said the message had to “go out there that there will be a massive fine if people are continuing to engage in this practice”. “It seems, which I have finding along the roads, is that people are tidying their cars and garages and they are throwing the bags out on the road and I think we need to start to getting people into Court and hurting them in their pockets because this type of behaviour is no longer acceptable in our communities.”

Ms Hussey then said she took on board Cllr Leahy's comments about the audio at bottle banks and said she would look into it. “The CCTV has worked well before at bottle banks. The only slight problem is that you catch everyone then and I suppose the people, who are trying their best to put their bottles in and leave a paper bag there, also get issued with a fine. There's a balance approach that we want to award people for using the bottle banks.”

Addressing the comments on illegal dumping, Ms Hussey said anywhere they find evidence of littering or dumping by people, they follow it up and fine them. “In terms of asking people to keep an eye and ring a number, I don't know how we would be able to implement that. We can definitely do an awareness piece on our social media that if you see illegal dumping to contact the local authority and report it. I don't want to go down the route of someone following someone in a car if they feel they have been dumping. All sightings of dumping should be reported to the environment section and to the litter warden and we will follow it.”

On another note, the footfall to the county's civic amenity centres had “definitely increased” since April and people had started to use them more.