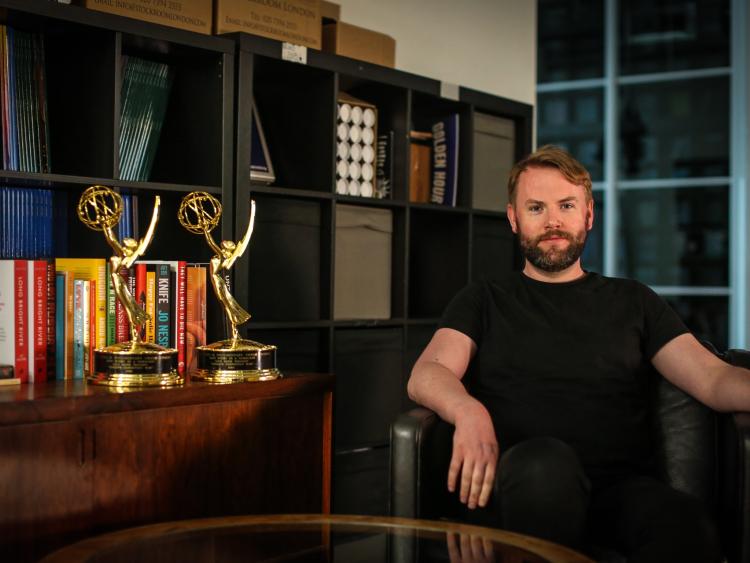 Pictured is Sean Stephens, who travelled to Italy to document its battle with Covid-19 in April

Emmy award winning television producer with experience of working in more than 30 countries across the globe, focusing on conflict and humanitarian crises and Lusmagh native, Sean Stephens, recently travelled to the epicentre of Italy's Covid-19 outbreak to capture the real life stories on the ground.

Sean grew up in Lusmagh, attending St Cronan's NS and later St Brendan's Community School, Birr where his mum, Mary was a Business Studies and Accountancy teacher. He spent his formative years in the Angler's Rest pub which his father, Michael ran for many years. Having finished secondary school, Sean then headed to take up a degree course in University College Dublin (UCD), later gaining employment with Newstalk before eventually taking the plunge and moving to London.

The now London based Bureau Chief for Vice News, Sean spearheads the company's international coverage and in this role, he recently travelled to Italy as part of a team to create the special report, entitled 'Vice News presents Covid-19; Italy's Tragedy', which aired on April 14 last.

Sean said when the project was first mooted, he put up his hand and said it was something he wanted to do as it was “an important story to tell and to tell it properly”. Sean travelled to Italy with the team on April 2 after a lot of preparation was completed beforehand. “We had to think what PPE, what clothing we needed. Obviously, we couldn't get PPE in Italy. Could we get it in the UK? But, they had shortages as well. How much would we need? What we needed to wear in certain filming scenarios,” he explained.

Having all the protection and planning in place, it was down to the Vice team to get a sense of what life was like for Italians in the midst of this catastrophe and they travelled to Lombardy, the epicentre in the north of the country. “We felt it was important that we went there to tell the story and the final aired piece was broken down into a couple of pieces,” he outlined including doing a ride along with the Green Cross (a similar organisation to the Red Cross in Ireland), who were tasked with calling to suspected Covid-19 cases and seeing the extreme precautions they had to use.

They filmed the Green Cross bringing nurse home patients to the hospital, which Sean pointed out they felt was something important to do because unlike the statistics here in Ireland, Italy's death toll is only reflective of those, who died in a hospital setting and had a positive Covid-19 test result.

Sean and his team then travelled to Bergamo hospital in the region, just outside Milan, which is a modern hospital facility, but was “totally overwhelmed” by the number of patients they had to take in, having to expand their ICU. There, Sean saw them having to put red tape down the middle of the floor, splitting hallways into clean and sterile areas. “And, also hearing their experiences of what it was like spending ten to twelve hours a day on a shift stuck in an ICU all day. Not being able to take a lunch break. Not being able to go to the bathroom and wearing the same heavy PPE all day and how traumatic it was.”

The team then spoke to a patient, who had survived Covid-19, who had a trachea insertion and subsequently removed and still had vocal problems when they spoke to him. “He was well and able to talk to us about how near the end he thought he was and how miraculously he managed to pull through. It was the oddity of it, and we didn't include it in the end but we went to visit his family, who weren't allowed to visit him. They got to talk to him on the phone. It was all lonely and very isolating.”

“This was something we picked up and we asked a family in advance, who were burying their grandmother could we film her funeral. In Italy, you couldn't hold a funeral. You could hold a prayer service. You could have fewer than five people and everyone there had to be wearing masks and gloves. It was certainly one of the most haunting things that we did while we were there. It was just so odd, in a hugely Catholic country, seeing this very brief prayer service and then the family, upset and traumatised. They couldn't stand next to each other and they had to watch a man in a hazmat suit put their mother's coffin into the grave. It was very strange.”

The Vice team also spoke to an 87 year old man, who because Italy had such a high death toll and were completely overwhelmed they were storing coffins while awaiting cremation in warehouses. “This man lived across the road from this and would watch as every couple of days they would bring the coffins away to be cemented. This man lives on his own. His wife had passed away a year ago but he would go and visit her graveyard but he couldn't now because of the lockdown. He had his birthday, his first since his wife passing, which he had to spend on his own. This very stoic man, reduced to tears, thinking about how lonely he has been over the last couple of weeks.”

Working in war torn Ukraine & Yemen to winning an EMMY

I took the opportunity then to ask Sean about his previous experience, filming in war torn Ukraine and later in Yemen where he and a team produced awarding documentaries about the humanitarian crisis in the country. Two of these productions eventually saw Sean along with the production team win EMMYs for 'Yemen's Forgotten War' and 'Inside a deplorable migrant camp in Yemen'.

“This was pretty much a year long project with some colleagues including two long trips there to see what was happening there in terms of the Proxy war, the humanitarian crisis and also how this conflict was allowing various nefarious players to Al Qaeda, Islamic State to do what they did.”

Sean and his colleagues did four pieces of work on this and two of those pieces, one looking at a migrant detention camp, went on to win an EMMY for the team. Sean explained that economic migrants from the Horn of Africa would travel to Yemen and walk to the Saudi border to get work there. “Having no idea that it would take them 30 days to walk there in blistering heat. But, also Yemen is pretty lawless and these people were being taken advantage of or taken into custody by pretty ramshackle policing authorities,” he said.

Sean and his team managed to get a migrant detention camp shut down because the man running it was basically locking about 700 people into one cage, given them at most one meal a day and beating them and women talked about rape and he was leading people to forced deportations. “He would send people, in cahoots with pirates, would send these people to Djibouti which is illegal. In some cases, and get them circled back into the bandits, who are people smugglers. There was an incident we recorded of a boat of people, this man had forcibly deported from his camp. They were met by another boat. None of these people could swim and they were told to get into another boat. 30 people drowned in that incident and this was not an unique incident.”

Sean continued this was an “extremely difficult story” to tell but one worth telling. The second story, which they also won an EMMY for, looked at a city on the west coast, called Al-Hudaydah which is strategically very important and at one point it was a crescendo of the conflict in Yemen.

“The majority of the imports come through this port and if the control of this was to be taken away from the Houthis, it would have had an devastating effect on 20 million people living in the north. There was a lot of effort in the background to sustain a cease fire and agreement that this was something that had to be avoided at all cost. By this time, it was an issue in the war something like 23 million people out of 27 million people were already on the verge of famine. This desperately needed to be avoided.”

Looking to the future, Sean said he has been basically “living out of a suitcase for the past seven years” so it's back to the day job as the London Bureau Chief for Vice News where he spearheads a team of between 12 and 14 people, managing international coverage of stories such as Covid-19 across the globe including pieces from New Zealand and Russia to name but a few. “We will have to see how the virus spreads and whether there will ever be a return to normal and what that will be like, we will have to see,” he concluded.