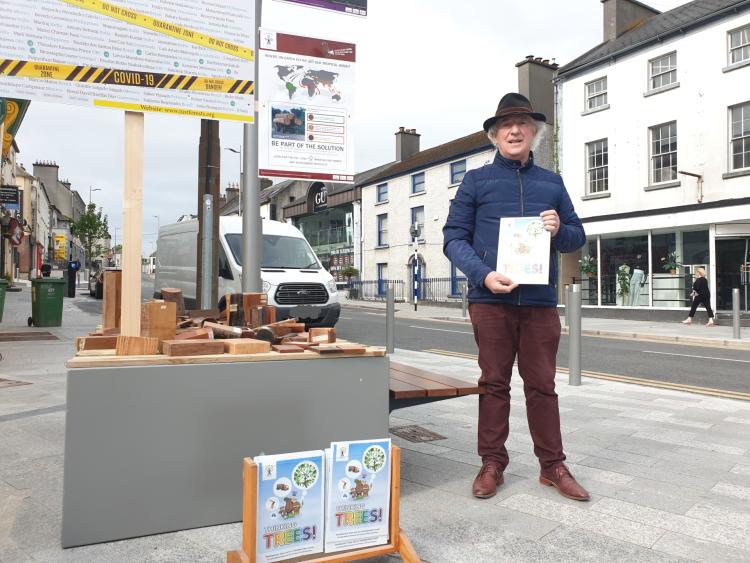 THE environmental campaigner who has mounted an exhibition in Tullamore promoting biodiversity has been advised to apply for a permit.

An engineer with Offaly County Council said he was unaware if Tom Roche had contacted the local authority in advance of today's event.

The Offaly man began a 10-hour vigil in the town centre at 8am this morning to mark UN International Day For Biological Diversity 2020.

The 71-year-old says the council should have used native timber instead of tropical hardwood for the new seating in O'Connor Square.

Mr Roche has set up a platform at one of the seats and has a variety of timbers from all over the world on display.

John Connelly, area engineer with the council, confirmed that he had spoken to Mr Roche this morning and said the environmentalist told him he would not be applying for a permit.

Mr Roche does not have permission for the signs which he has erected in the square, the engineer said.

Asked what action the council would consider taking, Mr Connelly said: “We'd be looking at it under either the Planning Act or the Litter Act. They're the regulations that apply from our point of view.”

Mr Roche says destruction of the natural environment by chopping down tropical forests helps to spread Covid-19 and viruses like it, said Mr Roche.

“When you destroy the ecosystems animals get closer and closer to humans and the viruses are more easily transmitted from animals to humans.”

Mr Roche's vigil has been supported by a number of artists and entertainers, including the singing priest Fr Ray Kelly who has posted his version of the Louis Armstrong song 'What a Wonderful World' on YouTube to coincide with UN International Day for Biological Diversity.