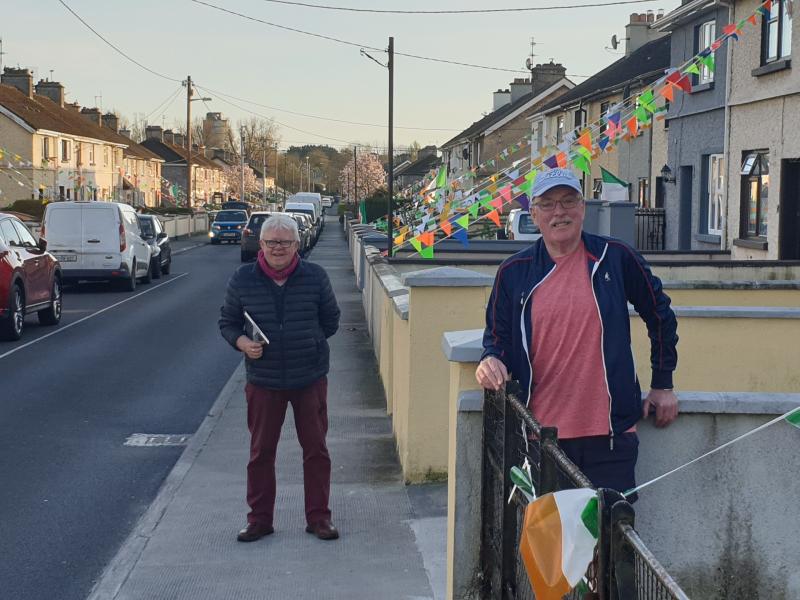 IN a spontaneous tribute to the healthcare workers, O'Molloy Street in Tullamore has become a blaze of colour in recent weeks.

Tricolours and bunting fly from nearly every house on the street as residents signal their praise and thanks to all the essential staff on the frontline in the battle against the coronavirus.

Longtime O'Molloy Street resident Marty Tilley is proud of how a tradition established on the street many years ago has been revived so spectacularly for this special occasion.

He was born in number 117 O'Molloy Street 64 years ago and still lives there.

“I'm one of only six families in the street that has been in the same house from the very first day,” he said.

It was the mid 1930s when the street was built and Marty's grandfather and grandmother, Martin and Honor Garrett, moved into the house.

Ray Murray is living across the street from Marty having moved from an area of even older vintage, Davitt Street.

But Ray is a son of O'Molloy Street too, having been born there 69 years ago.

His house is one of many which is proudly displaying the green, white and gold of several Irish flags and he was delighted with how the tribute grew and grew.

“Nobody organised this,” he said. “It was up at the house at the top (Hensey's) that the first flag went up. Somebody said, 'What are they putting up that flag for?' and they said it was for the workers.

“Word just got around the street.”

Marty Tilley said William Costelloe's house on his side of the street had a flag up around the same time and the residents said the display is a great example of the great community spirit which has always existed on O'Molloy Street.

They still recall fondly the great celebration held to mark the 80th anniversary of the street's foundation.

“The music went on until four o'clock in the morning,” said Ray.

And Marty remembered in particular the special birthday cake which was baked and designed for the occasion.

An “edible O'Molloy Street”, it was 14-feet long, was made by a Feery woman from Killeigh and had a representation of every house on the street on it.

Many years before that the tradition of erecting bunting was instigated by Mick Dunne and O'Molloy Street became known far and wide for its display, especially at the time of religious festivals like Corpus Christi.

The layout of the houses in neat blocks and the narrow street lends itself such decoration.

Ray said other council estates around the town also had similar community traditions, Davitt Street being one of them.

He said the Murray family are the longest continuing residents on Davitt Street, a scheme which was completed in 1907. His son Alan lives there now.

“A Murray moved into number 9 and a Murray has been in number 9 ever since.”