Offaly celebrates its saints and scholars 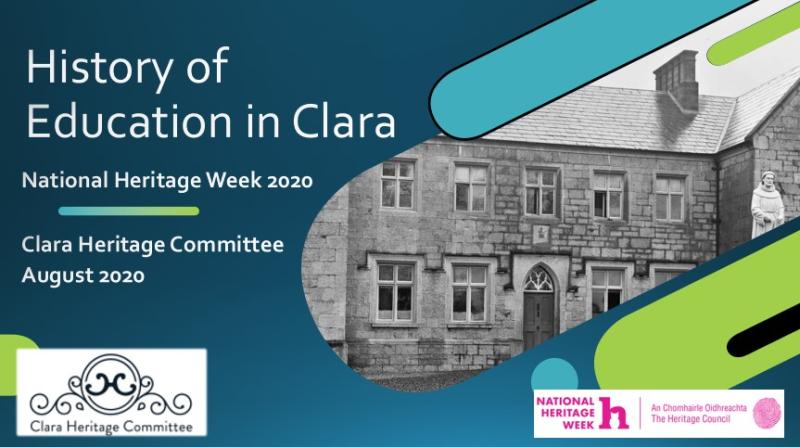 Clara Heritage Group is celebrating education in the area

Following on from its very successful "Dead Interesting" Guided Tour of Graveyards and Cemeteries last year, Clara Heritage Committee are once again participating in National Heritage Week (15-23 August) whose  theme is;  "Heritage and Education: Learning from our Heritage"

This year the Committee have researched and charted almost two hundred years of education provision within the town. Given the number of Saints - Brigid (Bhríde), Francis (Proinsias) and Kieran (Ciaráin) and the number of schools they have identified, the town itself could be referred to as "A town of saints and scholars".

“A History of the Diocese of Meath” indicates that within the wider parish of Clara there was a school in existence in 1682-85. The Education Report of 1825 records a total of 10 "hedge schools" operating in Clara prior to the establishment of the religious orders. These informal adhoc schools were located in a myriad of buildings across the town and surrounding townlands and were described in less than glowing terms as "a wretched room in a ruinous house", "a miserable cabin", "a common cabin" and "a wretched cabin". Others fared somewhat better and were listed as "Good house of stone and lime", and "a good cabin built of stone".

Following the establishment of the Franciscan Monastery (1821) and Convent of Mercy(1862) significant progress was made with regard to the provision of primary school education within the town. This resulted in the building of the Monastery School (1852) and Convent School (1887). Due to increased numbers the Monastery school built a second school closer to the town in 1874 (currently assembly hall of Scoil Phroinsias).

In addition to the religious teaching there were a number of secular teachers, most notably Mrs. Anne Jellicoe - originally from Mountmellick, but who travelled to Clara with her husband to set up a milling business. Inspired by the Mountmellick School of Embroidery where local women and girls were taught lacemaking skills as a means of earning their own pay, Anne Jellicoe set up a similar school in Clara, but faced stiff opposition from the local priest. Sadly, the school closed down following her move to Dublin where she continued her pioneering ways and established Alexandra College.

Clara as an industrial town required many mill hands and offered a steady wage, as a result many children sought work in the various mills and did not complete their education. Attempts to address this issue were made in the 1910-20's with the establishment of the Technical School which offered evening classes mainly to the mill workers. In 1920 during a Black and Tan raid on the town, the Technical school situated in the Parochial Hall was set alight and only for the quick action of the local mill hands and residents the fire was contained and minimal damage was done.

In the 1930's a nationwide initiative to capture local folklore through national schools was undertaken, both the Convent and Church of Ireland schools participated. In the various accounts written by the children are a compendium of local folklore, riddles, stories of local families, saints, leprechauns and landlords.

The 1950's saw the race to provide second level education in Clara where competing schools - Offaly Vocational School and the Franciscan Brothers strove to be the first second level school in the town only for them to be amalgamated a short time later.