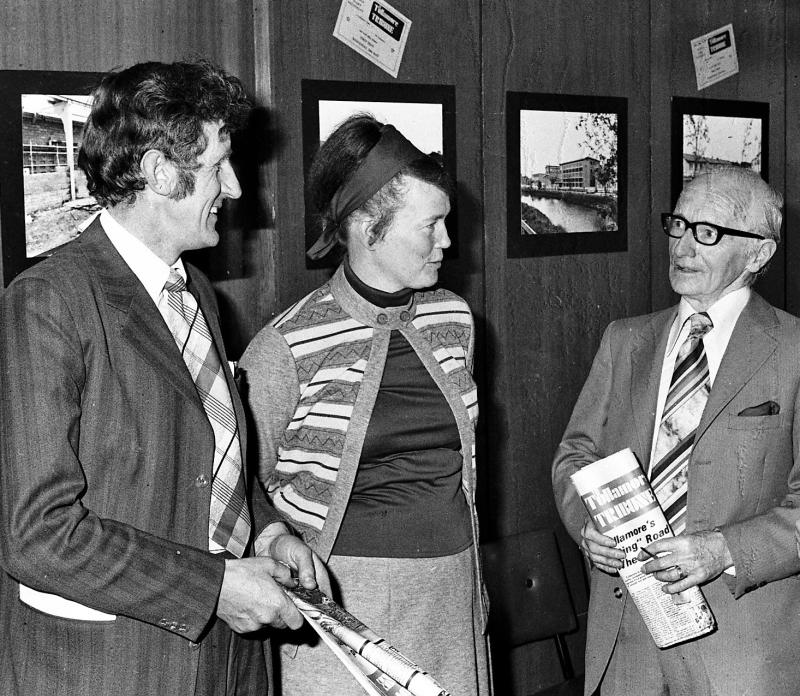 Geoff and the late Dorothy Oakley deep in conversation with J.I. Fanning at the launch of the Tullamore Tribune in May 1978 in Hayes Hotel. Pic: Richard May. TT1142GS

IN a warm tribute to his aunt at her Funeral Service in St Catherine's Church, Hophill on Wednesday afternoon last, her nephew Alan Ralph said Dorothy Oakley's life had been characterised by competence and compassion for others.

She was the first Senior Physiotherapist to be appointed ot Tullamore General Hospital in 1974 and remained as head of the Physiotherapy Department in Offaly until her retirement in the 1990s.

She was also deeply involved in the affairs of the Irish Society of Chartered Physiotherapists and served a period as national President.

In her role she was particularly conscious of inclusion regarding people with disabilities and of the value of sports, pioneering the “Sports for All” concept.

Dorothy was also involved in a host of community organisations, particularly in the field of disability, including the Friends and Parents of Laois/Offaly Spina Bifida.

Her work as a physiotherapist and in voluntary groups was recognised by Tullamore Junior Chamber in 1991 when she was honoured as the “Personality of the Year”.

In later years she and her husband, Geoff's love of animals led them to become committed members of the Offaly Society for the Prevention of Cruelty to Animals while the couple were also involved with Tullamore Gramophone Society.

Dorothy and Geoff, who had met in a newsagents in Birr following a Sunday morning church service, were married in 1972 and were a devoted couple.

Though they had no children of their own they were a constant presence in the lives of their nephews and nieces, Wednesday's Funeral Service heard.

Dorothy was born on May 23, 1937, the eldest child of John and Frances Abbott, and grew up in Cedarville, Birr.

She was educated locally in Birr before attending Collegiate School, Celbridge in 1950, sitting her Leaving Certificate there in 1955.

Initially planning to train to be a teacher, Dorothy changed her career path, qualifying as a physiotherapist.

Having obtained her Diploma in 1959 she set off to Harrowgate England where she completed a Diploma in Hydrotherapy.

In 1960 Dorothy secured a position at University Hospital London and in 1962 she moved to Zurich, Switzerland, where she worked for two years.

Three years later in 1965 Dorothy moved again, this time to Copenhagen, Denmark and it was here that her interest in congenital deformities was initiated. She became involved with the Danish Save the Children Leprosy Control Project and subsequently volunteered to head this work in India in 1968.

She was responsible for therapeutical treatment of 20,000 patients as well as planning programmes and training staff. Giving lectures at the Regional Seminars of the World Health Association was all part of the job.

After a brief return to Denmark, Dorothy came home to Ireland where she married Geoff Oakley in St. Brendan's Church, Birr on February 10th 1972.

Geoff worked with the Midland Tribune and went on to become the first Editor of the Tullamore Tribune following its foundation in 1978, a post he held until his retirement in 1994.

In the same year as her wedding Dorothy returned to London to qualify as a teacher, Having graduated on September 11th 1973 she returned to Ireland and began teaching in the Mater Hospital School of Physiotherapy.

By 1974 Dorothy settled down in Offaly taking up the position of Physiotherapist in Charge of Laois/Offaly with the Midland Health Board based in Tullamore.

She and Geoff travelled all over the world, particularly following her retirement when they spent long periods in South Africa, Australia and other far flung destinations.

Despite having health issues in later years, Dorothy continued to work as a volunteer and be involved in community groups in Tullamore.

She passed away in Tullamore hospital on Monday afternoon and her remains reposed in O'Reilly's Funeral Home on Tuesday before her Funeral Service on Wednesday afternoon. The Service was conducted by Rev. Isaac Delamere, Rector, Tullamore, Archdeacon Wayne Carney, Rector, Birr and Rev. Ruth Gill, retired. Burial was to St Catherine's Cemetery, Hophill.