AN ancient Monterey Pine tree which was removed from the Spollenstown area of Tullamore has caused a lot of upset for some residents living in the area who maintain they were not consulted before it was taken down.

However, a spokesperson at Offaly County Council says the tree was badly damaged and was a danger to road and footpath users.

Meanwhile, a sign has been erected at the site of the tree, and as if the tree is telling its own story it states. "My name is Monty. Me and my branches had been hanging out here for a long long time!

"I can remember a lot, the foundation of the State and a couple of world wars among other things!

For many years all was well, men came to build a road and path, that was ok. Men came to widen the road and that was ok too. They valued me and kept me."

It goes on to say that it was then cut down due to a "small bump in the road." 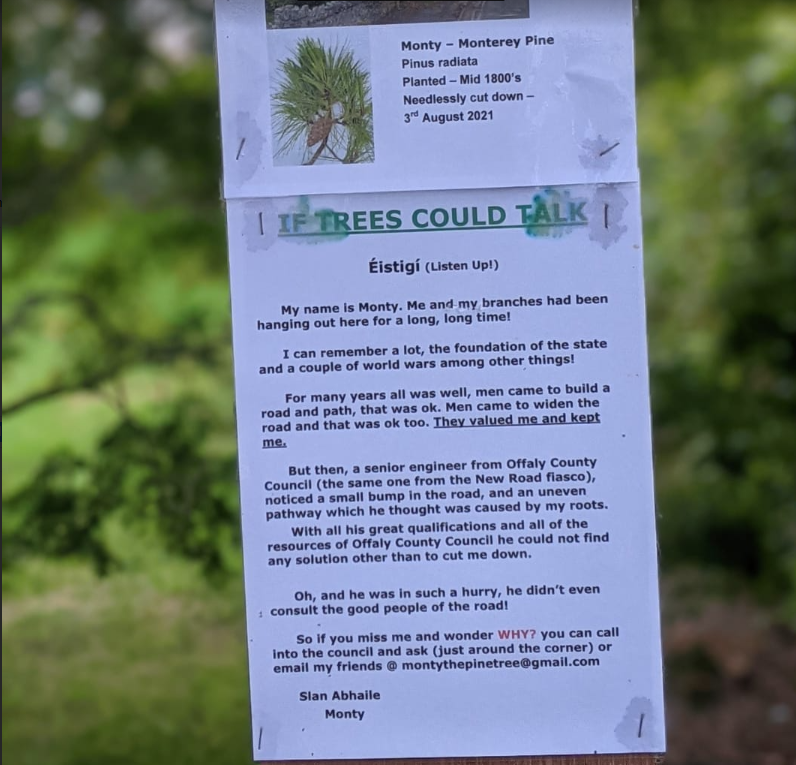 Offaly County Council stated: "The tree in question was the source of severe damage to the adjacent road and footpath to the extent that the footpath and road in the vicinity could not be used safely. We had a temporary traffic management in place for a number of months in the interest of the safety of road users.

"We consulted with a number of arborists and the Tree Council as well as residents in the area; we decided ultimately that the sensible option was to remove the tree."