One budding teenage entrepreneur from Ard Scoil Chiarain, Clara has been selected to represent Offaly at the Student Enterprise Programme National Finals in Croke Park.

The young entrepreneur will represent the Local Enterprise Office and their county at the Student Enterprise Programme showpiece on May 3.

Niamh McKeon was one of the students competing at the Offaly Final on March 7, held at the Tullamore Court Hotel. Over 450 students from nine schools took part in the annual programme locally. This year a total of 19 businesses and over 50 students reached the County Final.

Niamh will be representing Offaly in the National Final on 3rd May with her business “Dulce Chocolates”. She produces a range of delicious handmade chocolates including sea salt and orange chocolate truffles.

As well as sharing the prize fund of almost €2,000, the winner received a specially commissioned trophy designed by Ross Hathaway of Metal Meyham, Kilcormac, and every student received a certificate to mark their participation in the competition.

This year, the students themselves had an opportunity to vote for their favourite project. The “Student Award” went to “Isy’s Creations” from Banagher College who received €75. The business is owned by Isobel Dempsey who produced a range of beaded and friendship bracelets which proved very popular with students.

Speaking at the final, Mr Danny Owens, Cathaoirleach Offaly County Council, commended the students for their efforts. He also thanked their teachers and parents for their support.

On behalf of the Local Enterprise Office Offaly, Geraldine Beirne firstly thanked the teachers involved for their support and acknowledged that without their commitment the Student Enterprise Programme would not take place. She also thanked the judges Caroline Collins, Tullamore Credit Union, Catriona Duggan, Offaly Local Development Company and James Maloney, Enterprise Ireland for giving of their time so freely. Finally, she gave a special word of thanks to the students for their hard work and enthusiasm.

Co-ordinated by the Local Enterprise Offices in every Local Authority area, the competition is the most successful student enterprise programme of its kind in the country.

Every September, entrepreneurial secondary school students across the country begin their business journey as they are encouraged to brainstorm, create and run their own businesses.  In September 2018 over 23,000 students from 480 schools nationwide began their entrepreneurial journey with the help of their teachers and their Local Enterprise Office (LEO).

The local students will be competing with hundreds of other student entrepreneurs from all over Ireland in Croke Park at the 17th Annual Student Enterprise Awards National Finals on May 3.  The Student Enterprise Programme began in 2003 and with over 170,000 students getting involved since its inception.

The Local Enterprise Offices are co-funded by the Irish Government and the European Regional Development Fund 2014-2020.

The following awards were presented at the Offaly County Final: 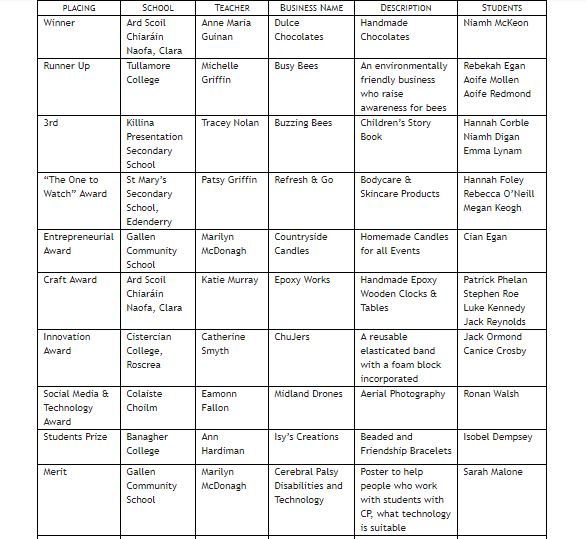 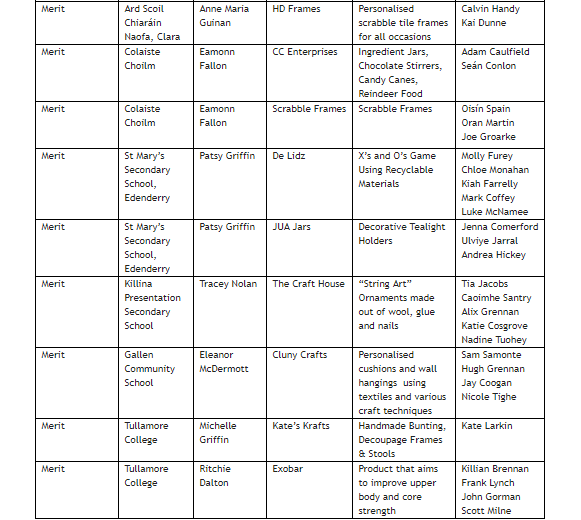