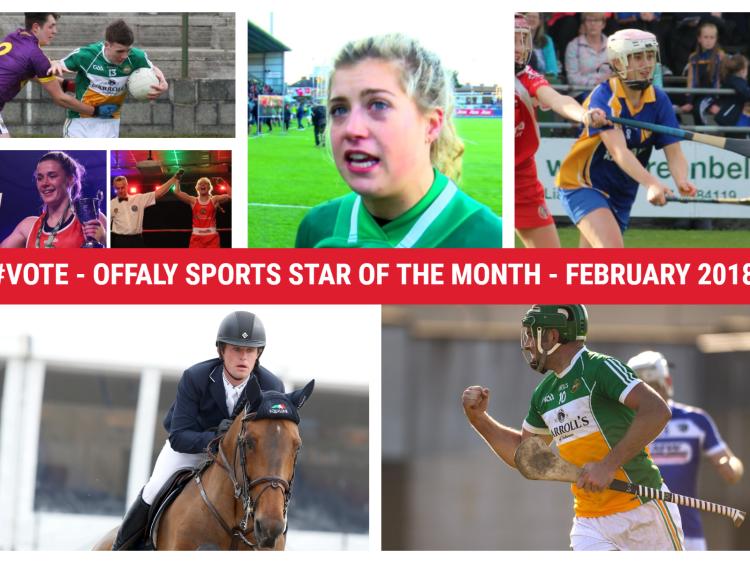 VOTE: Choose your Offaly Sports Star of the Month for February 2018

February was a bumper sporting month for Offaly and we have ten superb nominees in our vote to crown the Offaly Sports Star of the Month, sponsored by Guy Clothing, Tullamore.

You can vote at the top of this article by clicking 'vote' beside the name of the person you think deserves to win.

Darragh Kenny -  The Ferbane man won the $35,000 HITS Classic at Ocala’s five-star Nations Cup show in Florida, USA. As well as that, earlier in the month, he beat off competition from a classy field, including Jessica Springsteen, the daughter of rock icon Bruce Springsteen to claim the  $132,000 Adequan Grand Prix, also in Florida.

Joe Bergin (Offaly Hurling) -  Bergin bagged a personal tally of 1-4, a total that included a stunning goal from the 21-yard line, as Offaly efficiently notched a 1-21 to 1-16 victory over their near-neighbours Laois in the Allianz Hurling League.

Lauren Hogan (St. Brigid's Boxing Club) - Lauren cruised to a 5-0 win in the 54kg class at the National Elite Boxing Finals, claiming her third elite title in the process.

Grainne Walsh (Spartacus Boxing Club) - Grainne claimed her second elite title in the 69kg grade after an easy 5-0 victory at the National Elite Boxing Finals. She was also awarded the Jimmy Magee Cup for the best female boxer on the night.

Stuart Grehan - The Tullamore Golf Club man claimed his first professional tournament win on the Algarve Pro Tour in February, less than a year after claiming the prestegious Mullingar Scratch Cup. He shot stunning rounds of 66 and 68 to claim the trophy in Portugal.

Cian Johnson (Gallen CS) - The Offaly star was in free-scoring form as he bagged a personal tally of 2-7 in a 3-13 to 0-10 win for his school over O’Carolan Colaiste Nobber in the Top Oil North Leinster PP School's senior football 'B'  semi-final in February.

Darragh Farrell -  The Edenderry student proved he was one of the county's rising boxing stars by claiming his fourth Leinster title in a row with a smooth performance in the final in Athy.

Ailsa Hughes (Irish Rugby) - Three Offaly women represented the Irish Women's Rugby Squad in the Six Nations in February, but after a difficult game in the defeat to France on the opening day, Offaly's Ailsa Hughes was instrumental at scrum-half as Ireland recovered to beat Italy and Wales later in the month.

Georgina Touhey (Tullamore Harriers) - Georgina who won the Senior Ladies 3000m Walk in the National Senior Indoor Track and Field Championships in a time of 16.02.37. This was a great result for Georgina who has been training very hard after an absence due to injury.

The voting will remain open until 10pm on Sunday, March 11. The winner will be announced on Monday. The winner will receive a specially commissioned glass trophy and go forward as the February nominee to compete in our Offaly Sports Star of the Year 2018 poll, which will be launched in January 2019.

Scroll to the top of this article to cast your vote.