VOTE: Choose your Offaly Sports Star of the Year for 2017

Choose your star from each of our monthly winners 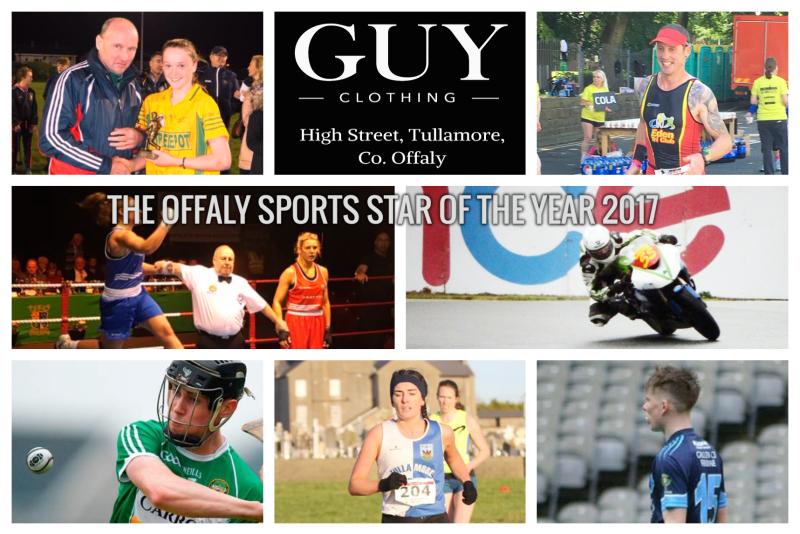 VOTE: Choose your Offaly Sports Star of the Year for 2017

Having launched our Sports Star vote in June in conjunction with our kind sponsors Guy Clothing, Tullamore, we have crowned seven monthly winners of the award.

Now, attention turns to naming the Offaly Sports Star of the Year for 2017 in this poll pitting all seven monthly winners against one another.

From sports ranging from motorcycle racing to camogie; triathlon to boxing, the seven contenders have all produced stunning performances and made our county proud throughout 2017.

You can vote above, but first, take a read and find out why these seven candidates are our finalists.

And the nominees are...

2017 was a stellar year for the Tullamore Harriers and Nadine Donegan was one of their absolute stars. She was our first winner after the Sports Star series was launched in June, receiving over 30% of the final vote.

She was presented with her award in Tullamore weeks later by Anthony Kearns from sponsor Guy Clothing.

Donegan was voted the clear winner in June having won her first national title in the U23 5,000 event on home soil. Tullamore once again hosted the National Under 20 and Under 23 Track and Field Championships in late June and Nadine emerged as the star.

She won her first national title in great style in the U23 5,000m event. She was in powerful and unforgiving form as she won by twenty six seconds, a huge margin in a national championships.

Edenderry athlete Enda Bagnall won our July award with 28% of the vote after he ran the Bolton Ironman event in the UK in a sensational time of 10 hours and 26 minutes.

The dedicated triathlete, known affectionately as 'Baggy,' had a sensational 2017, including an historic win at the Joey Hannon Memorial Olympic Triathlon, one of the top triathlon events in the country.

Tullamore boxer Gráinne Walsh was our winner in August with an incredible 47% total of the overall vote after she brought home a bronze medal from the European Union Elite Boxing Championships in Cascia, Italy.

It may have been silver or even gold but Gráinne appeared to be on the wrong side of a split decision against her German opponent in the semi-final.

She didn't let it faze her and had a marvellous 2017, going on to claim gold at the Boxam Elite tournament in Tenerife in November of 2017.

In September, the Offaly Sports Star of the Month went to the track and young Edenderry motorcycle racer Kevin Keyes. Keyes impressed on the superbike circuit in September, culminating in a number of podium finishes at Mondello Park.

He racked up and impressive 38% of the vote in September to claim the monthly prize.

Jane amassed 27% of the vote to win ahead of Ferbane footballer Cian Johnson in October having shown herself to be a rising camogie star in the county.

She was a crucial member of the KK wheel in October as she won the Player of the Match award in their win in the U16 County Camogie Final.

Rising football star Conor Lynam ran away with the November award with 40% of the vote after some stellar performances for his club, Erin Rovers.

The Offaly U20 county player scored three goals in Erin Rovers' Leinster semi-final win as they became the bolters on the Offaly football scene for 2017.

Colm was a strong winner of our final poll of the year in December, picking up the award for his performances with the Offaly senior hurlers in their run to the Walsh Cup semi-final.

The young Drumcullen hurler made his senior Offaly debut in late December as he lined out against Westmeath. The game was Kevin Martin's first official fixture in charge of the side and he would have been buoyed by Gath's 2-2 tally from the half-forward line.

He collected 46% of the vote and beat off competition from young Offaly football stars Cian Johnson and Jordan Hayes. Colm announced himself as a real prospect for Martin and the Offaly hurlers as they build for the future.

The vote is now open but will close at 10pm on Sunday night, January 21. The winner, who will be announced on Monday, January 22, will receive a specially commissioned trophy sponsored by Guy Clothing and a voucher for clothing at one of their stores in Tullamore.

They will also have the honour of being named the Offaly Express/Guy Clothing Sports Star of the year for 2017.