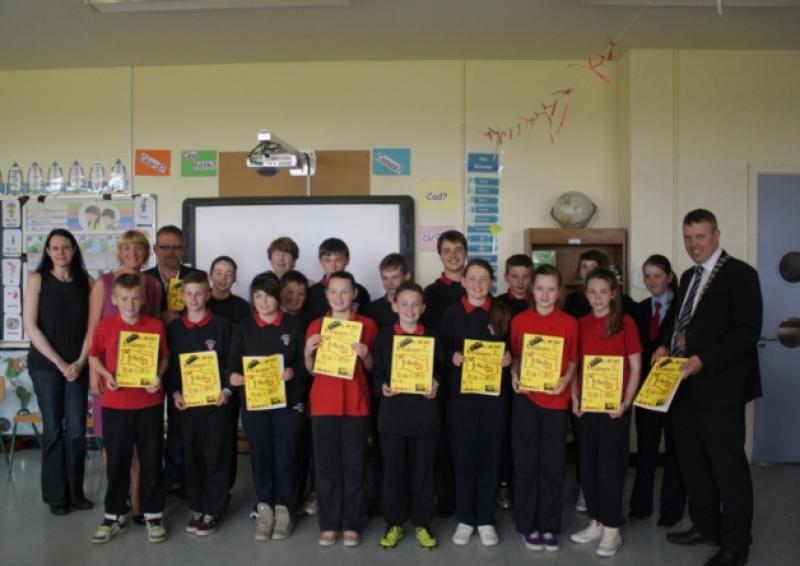 Pupils from Daingean NS have been studying St. Conleth’s Reformatory as part of the local studies module in the History Curriculum.

Pupils from Daingean NS have been studying St. Conleth’s Reformatory as part of the local studies module in the History Curriculum.

Their teacher arranged a visit which was facilitated by Brenda Malone (Curator, National Museum) last year. Pupils were brought on a tour of the building and its surrounds and were provided with a unique historical experience.

Following their local study, the pupils wrote and published a booklet on their experiences and research into it. This booklet details their research and photographic, documentary and oral evidence is included in it. Since being built as a British Army Barracks in the mid to late 1700’s, it has subsequently been an industrial school, a seminary, a reformatory school and a storage warehouse for the National Museum. Evidence in relation to all of the above is recorded in the booklet. Each pupil shared a thought on their experiences of the research they conducted.

The OPW currently owns the property and the National Museum is in the process of moving their collection from there as they have purchased another storage facility in Dublin.

“It is sad that the door is once again being closed on this historic building, especially considering the significant investment that has been put into it to maintain an environment condusive to housing a collection from the National Museum” teacher Stephanie Fitzpatrick said.

“Whilst parts of the buildings are structurally unsound, there are many areas that are safe and could be used to benefit the local community and economy”, she says. Cathaoirleach of Offaly Council Peter Ormond commended the pupils on their contribution to local history and their active participation in researching a local building of such historical value. He also praised the community spirit which is evident in Daingean and congratulated the community of its efforts to promote the local area and mentioned the Heritage Fair last week as an example of this.

Curator of the National Museum Brenda Malone stated that she was “very impressed with the booklet” and commented that the children worked as true historians and used the skills in the curriculum in their research of local history. She also requested a copy for the Turlough Park National Museum of Folk Life in Castlebar, Co, Mayo.

This is the other storage facility for the National Museum in Ireland and will now be the only such facility outside of Dublin. Brenda said that whilst she does not miss the driving, she does miss Daingean and really enjoyed the years she spent working in the St. Conleth’s as Curator. It is hoped that this booklet will raise local and national awareness and appreciation of the historical value of this unique building that lies steeped in history in Daingean. The school choir which is led by local teacher Mrs. Colgan finished proceedings with a rendition of “Roots in this Land”, the song written by local musician Wayne Brennan whilst filming “A Grand Experience” last year on the Grand Canal which flows through Daingean. It is hoped that the booklet will be available in all county libraries and the school. Thanks goes to all those who contributed to the booklet and attended on the day.