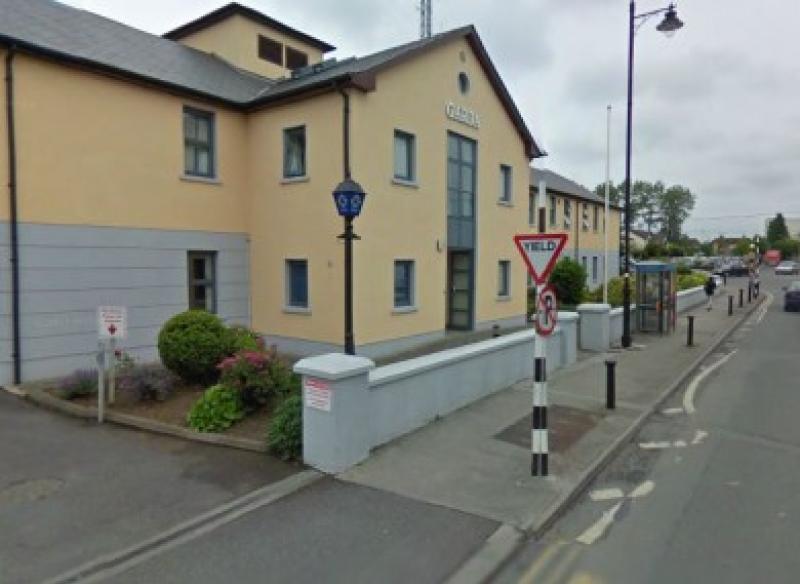 AN afternoon fight between a number of men and a woman broke out just yards from Tullamore Garda Station and was witnessed by a sergeant from her office window, Tullamore Circuit Court heard.

Three people, Craig Real and Shannon Mahon, both of Church Hill, Tullamore, and Adam Doyle, Arden View, Tullamore, pleaded guilty to affray as a result of the incident at Kilbride Street on March 25, 2021.

Mr Real (29), partner of Ms Mahon, also pleaded guilty to possession of a weapon. Judge Keenan Johnson was told at a sentencing hearing last Friday that he was seen holding a dumbbell bar and the incident was also recorded on a mobile phone.

Footage was played in court and Detective Garda Rory Heffernan said recordings were posted on Facebook and Whatsapp groups.

Detective Garda Heffernan said that at 4.10pm on the date of the incident Sergeant Pamela Nugent looked out the window of the station and heard shouting and saw a male with some sort of weapon in his hand “highly agitated and aggressive” and shouting and reaching into a vehicle.

The detective garda said the man was seen striking into the vehicle with his implement and Sergeant Nugent could see him pull a person from the passenger seat of a jeep.

She saw a woman standing at the back of the jeep at a Volkswagen Jetta and she appeared to be encouraging the male to engage in violent behaviour.

Sergeant Nugent identified the man with the weapon as Craig Real, the female as Shannon Mahon and another man as Adam Doyle. When Detective Garda Heffernan investigated he found footage which showed Mr Doyle kicking Shannon Mahon on the ground.

Judge Johnson heard Mr Real had 40 previous convictions, ranging from criminal damage, burglary and robbery, to public order offences, possession of weapons and arson. Some of the convictions were committed in the UK when he was a minor.

The court was told many of his convictions were due to substance abuse but he had completed a 20-week treatment programme in Cuan Mhuire in October and was now doing well. He had spent four months in custody.

Detective Garda Heffernan accepted that Mr Real was intoxicated on the day of the offences at Kilbride Street and had drunk a bottle of Buckfast as well as taking tablets.

The garda said Mr Real was now doing voluntary work two days a week in the Cuan Mhuire addiction treatment centre and the gardai had no problems with him when he was sober.

Detective Garda Heffernan said there had been an ongoing fued between the parties but thanks to the intervention of the gardai and the court it had been quelled.

Mr Real intended doing a course in personal training and now spent his time reading his NA book, going to the gym and Mass and was making every effort to rehabilitate.

Ms Mahon had eight previous convictions, including dangerous driving, failing to give a breath specimen, public order offences and possession of knives and other articles.

She is the mother of two children with Mr Real, was very sorry for what she had done, and now hoped to avoid garda attention.

Detective Garda Heffernan agreed that Mr Doyle's account was that Mr Real had been outside his house in Arden View and that after Mr Doyle left and went into town, the vehicle with Mr Real and Ms Mahon in it pulled up behind him.

Mr Doyle also detailed that Ms Mahon had leaned into his vehicle and spat at him and grabbed his private parts.

Judge Johnson said it appeared to him there was bad blood between Mr Doyle and Mr Real. The behaviour on the day was disgraceful in the middle of the day and that type of very violent offending was way too frequent.

A dumbbell bar had been used by Mr Real but Mr Doyle had given as good as he got.

Considering the sentence for Mr Real, he said there had been some level of premeditation because Mr Doyle had been followed to the scene and the man had a previous conviction for violent disorder.

Mr Real's time in custody seemed to have been a wake-up call for him and he had gone into drug rehabilitation and was now drug-free.

Judge Johnson said the guards were satisfied he had turned his life around and would stay out of trouble if he stayed off drugs.

In relation to Ms Mahon, aged 26, he said it would have been an appalling vista for her if her children had to go into care.

He believed Mr Real and Ms Mahon were making genuine efforts to rehabilitate and he adjourned finalisation of sentencing to December 20 next, remanding both on bail on condition they signed peace bonds.

They were put under the supervision of the probation service and will be assessed for community service.

He said if they are deemed suitable for community service, they will complete 240 hours each in lieu of two years in prison.

Mr Doyle, a 21-year-old, was the same day in court for sentencing for another unrelated offence and was also remanded on continuing bail to December 20, with a similar indication from the judge that he is facing 240 hours of community service.