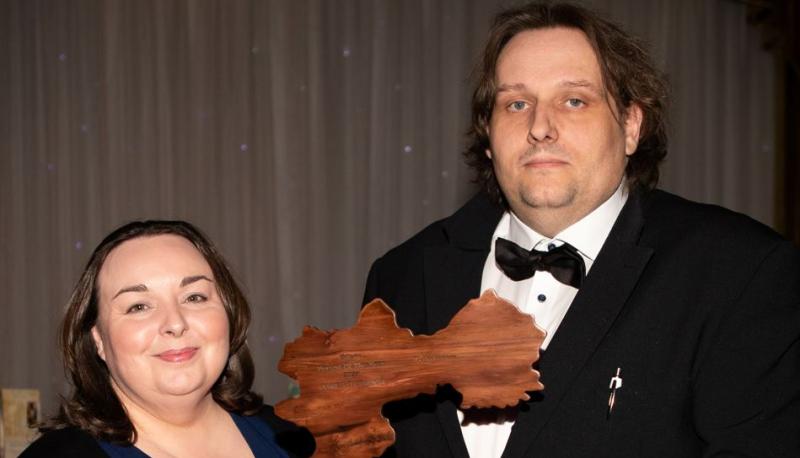 James O'Connor, the 2021 Offaly Person of the Year pictured with his partner Lisa Guing at the awards ceremony on Saturday night last

MENTAL health campaigner, James O'Connor was presented with the prestigious 2021 Offaly Person of the Year award at a ceremony in Tullamore on Saturday night last.

The third annual Unsung Hero of Offaly award was presented to the Pullough Community Shop at the ceremony.

The awards were organised by a special sub-committee of the Offaly Association (Dublin) and presented to the recipients by the Association's chairperson, Jennifer Gleeson.

In a brief address, Jennifer Guinan congratulated the award winners and extended thanks to the organising committee, the sponsors and the Bridge House Hotel.

Cllr. Declan Harvey said he was delighted to be present on behalf of the people of Offaly and he congratulated James O'Connor on winning the 33rd Offaly Person of the Year award.

"I know James a long time and I want to acknowledge the great work he is doing in Tullamore and to congratulate him and Lisa (his partner) on all that they have achieved,” he stressed.

"I would also like to congratulate those involved in the Pullough Community Shop on winning the Unsung Hero award. It has shown the great community spirit that exists in the area.”

Following the presentation of the awards, the recipient of the 2019 Offaly Person of the Year award, Brendan Martin proposed a toast to this year's winners.

Speaking immediately after James O'Connor's acceptance speech, Mr Martin said "after what I have just heard from James there is very little I can say.

"James O'Connor is a man in a million. At 42 years of age, he is half my age and he has packed more into his life than I have in mine," outlined Mr Martin.

He added, "he spoke of having bouts of depression. After the economic crash I had bouts of depression having to deal with an American vulture company, but with the support of my wife, my kids and my friends I got to pay them off in 2012 and since then I have not had a sleepless night. It is wonderful to have people like James O'Connor starting up ACT to help people who have depression.

"James O'Connor, you deserve this award. What you have done is more than what any other Offaly Person of the Year has ever done," said Mr Martin to rousing applause.

The proceedings came to a conclusion with a wonderful rendition of “The Offaly Rover” by Mick Scully.