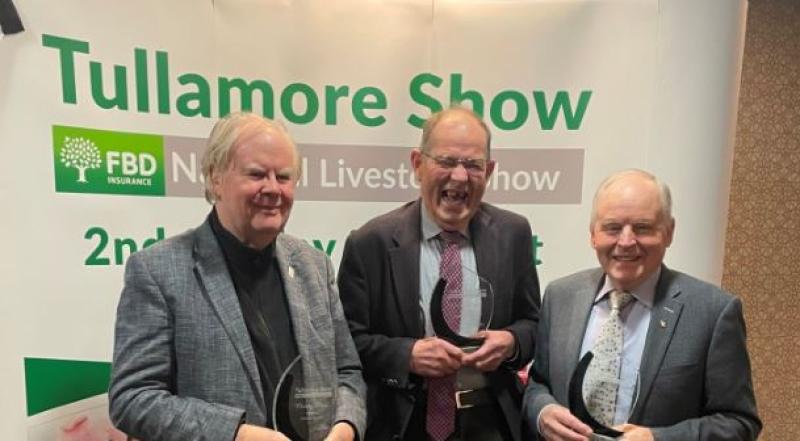 Christy Maye, George Gill and Tommy Finlay who have been honoured for their service to Tullamore Show

THE three longest serving members of the Tullamore Show and FBD National Livestock Show Executive have been honoured by their peers on their retirement after almost a century of joint service.

Special presentations were made to Christy Maye, former PRO, George Gill, former Site Manager, Chairman and Assistant Chairman and Tommy Finlay, former Chairman of the Dairy Cattle section, at a meeting of the Show Executive in the Bridge House Hotel on Wednesday night last.

Tributes were paid to the trio by the Chairman of the Show Executive, Joe Molloy who said they had given a lifelong commitment to the event since its revival in the early 1990s.

He said that Honorary Life Membership of the Show Executive has been bestowed on all three.

“Their expertise and incredible work ethic has meant so much to the show,” outlined Secretary and Operations Manager, Chelsey Cox.

She added: “Their dedication and commitment has been remarkable over many years. The enthusiasm and sheer hard work is unmeasurable. No matter how big the challenge was there was always a solution.”

Christy Maye was one of the founder members having been a successful businessman in Tullamore and Mullingar. He masterminded new ideas and saw them through to fruition. Christy held the position as PRO for many years and played a vital part in the show’s success.

George Gill joined the show in the very early stages and held many positions - Site Manager, Vice Chairman, Assistant Secretary and was elected Chairman in 2010. George was a great negotiator with an immense wealth of knowledge and his kind, endearing manner encouraged many volunteers along the way.

Tommy Finlay, a keen exhibitor at various shows in Ireland for many years, was invited by one of the show's founder members to take over the Dairy Section. Tommy’s huge expertise and knowledge resulted in a very successful section which continues to grow. The Ballydaly man encouraged and mentored many over the years with his calm and pleasant manner.

After an absence of due years due to Covid restrictions, this year's show takes place on Sunday, August 14 at the Butterfield Estate, Blueball.

The closing date for trade stand applications is Friday, May 20.