The failure of the 2010 Tullamore Town Development Plan 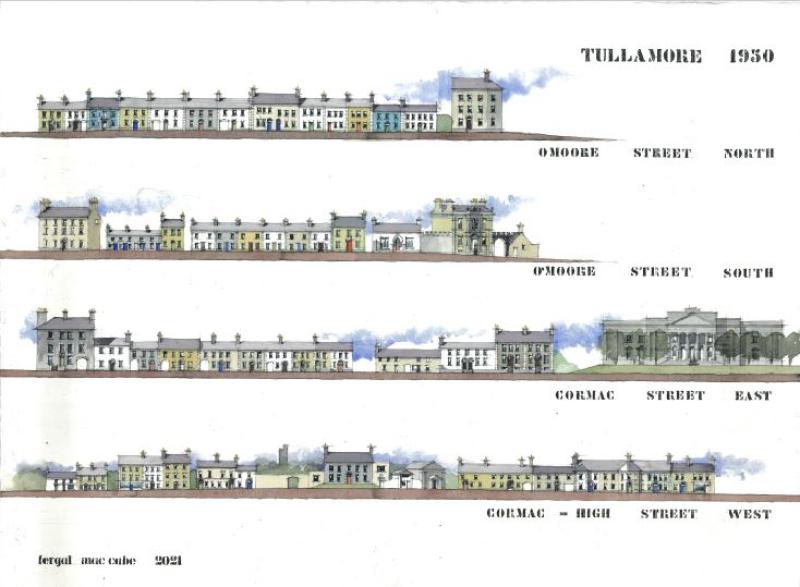 Fergal MacCabe's illustration of the streets of Tullamore

The Local Development Plan is at the centre of the participatory Irish planning system.

In a 1991 ruling, the Supreme Court stated that the Development Plan is ‘A contract between the planning authority and the wider community, embodying a promise by the planning authority that it will regulate private development in a manner consistent with the objectives of the stated plan’. In particular, the Plan is the basis upon which the local authority will invest its own or state funds for the benefit of the community.

Made every six years by the people and the stakeholders speaking through their public representatives, the Plan is prepared by experts and guided by regional and national policies. Plans look out to a twenty year horizon but focus in on the specific projects to be delivered over their six year life. The marks by which a good Development Plan may be recognised are ‘Credibility, Certainty and Clarity’.

From the 1950s onward, six Development Plans directed the growth of Tullamore. Some were cautious, some a little more adventurous, but all involved the local community in their making and in particular in framing the projects which would be carried out within their lifetime.

Amongst the achievements of the six plans were the delivery of the Eastern Bypass, the Western Link Road, good housing and employment areas, a new County Library as well as a magnificent Town Park. However, while delivering excellent town centre shopping facilities including the Bridge Centre and New Main Street, the plans also encouraged the northward sprawl of the suburbs, a competing centre on the bypass and consequently a lot of vacant sites in the centre.

The Tullamore Town Plan made in 2010, was by far the most ambitious but unfortunately emerged during a badly conceived National Spatial Strategy and a booming economy, both of which imploded shortly after its adoption.

Its principal legacy was extensive overzoning. Though an additional c.5,250 persons were expected by 2016, in the end only c.300 arrived. Four new residential neighbourhoods had been designed to accept this projected need and detailed plans prepared for each. Retail and community centres were allocated, school sites identified, local parks proposed, all with pedestrian and cycling routes linked to them. Even the form of future streets and building shapes and density were described. In the end none were substantially built out and eleven years later the westernmost one was dropped entirely and another considerably reduced in scale.

In marked contrast to the detailed suburban areas, the town centre was a blank canvas whose main feature was an extensive area zoned for shopping, one and a third kilometers across and well beyond reasonable walking distance from one end to the other. Suggestions as to how this zone might develop were confined to two small maps, one showing the location of future high buildings- though there didn’t appear to be any rationale for their selection; the other map identifying nine ‘Opportunity Sites’ as being cleared and ready to go. Eleven years later, eight remain undeveloped.

The 2010 Plan was based on the assumption that a buoyant private sector would deliver the objectives while the Council would stand back and take a relatively non-interventionist role.To foster this laissez faire approach, the Plan lacked any proposals for road links to open up town centre backland sites. No masterplans were prepared for the ‘Opportunity Sites’.No pedestrian routes or cycleways were identified. There was no assessment of the quality or potential of the wonderful architectural heritage of the town (illus.) and the promised Architectural Conservation Areas never materialised. The locations of Protected Structures were not included on the maps and none were specifically identified for restoration. No tree groups were considered worthy of preservation. In particular, a commitment to prepare an Urban Realm Strategy which would have provided a context for civic improvements, was never pursued.

Some of the pedestrianisation initiatives referred to in the text of the document, such as at Bury Quay and O’Connor Square were delivered, as were new footbridges to Clontarf Road and New Main Street; but as there was no integrated plan, they were stand alone schemes with no connections to each other.

The recently adopted Offaly County Plan sets out modest but sensible broad strategies for the development of Tullamore up to 2027 and these will now be fleshed out in a Local Area Plan whose adoption process will continue into 2022.

Though a new plan should have been made in 2016, it was put on life support to coincide with the timetable for national and regional planning. However, unanticipated investment opportunities and funding programmes came along and had to be seized. In particular European Union Regeneration and Development Funding became available and in response the Council advanced several projects under fast track Part 8 legislation including:

A new road linking the Tanyard and High Street via the Roselawn housing estate. Though it probably makes sense, the 2010 Plan simply proposed an ‘investigation of the feasibility of creating a linkage, pedestrian and/or cycleway’ and not a road.
The Living River Project. A significant ecological initiative which is to be welcomed, though its relationship with its immediate urban surroundings and potential for public engagement remains to be explored.
A cycleway along Store Street. This short strip comes off the Greenway but disappears when it gets to Benburb Street. Its relationship to a future town wide cycle route is unknown as none exists.

These stand alone projects have been promoted by an energetic executive branch which seized individual opportunities as they arose, but it would have been better had they been pursued as parts of an integrated and publicly approved strategy which could better exploit their investment.

Maybe there is such a strategy. In March of this year Ministers Darragh O’Brien and Peter Burke announcing € 2.5 m. funding for a range of new town centre initiatives, stated that ‘These complementary projects form an integrated package and together build on the strategic vision for Tullamore Town Centre’, while on the 3rd October, Minister Eamon Ryan declared that ‘The proposed Tullamore Regeneration Framework will be the principal impetus for compact mixed use urban development in the town centre of Tullamore, regenerating vacant and underused sites in a coherent and integrated manner’.

The new Local Area Plan will now have to incorporate not only the radical policies of the National Planning Framework but also those of the recently adopted Climate Action and Low Carbon Act whose transformative vision seeks to halve carbon emissions by 2030 and to achieve a carbon neutral economy by 2050. Both initiatives will encourage compact growth, sustainable mobility, enhanced amenity and heritage and transition to a low carbon and climate resilient society.

For Tullamore, that will ultimately mean more dwellings in a denser but more attractive centre coupled with the development of a new southern neighbourhood beyond the railway line. Above all there will be a bias in favour of walking and cycling and the reduction of motor car trips.These are all very dramatic changes which will hopefully receive the approval of the people of Tullamore but they should not be embarked on without democratic consent.

Next week’s article will discuss the problems and opportunities which the new plan will bring.

Fergal MacCabe is an architect and town planner. The illustrations for these articles are from his forthcoming book on the architectural heritage of Tullamore from 1700 to1960.