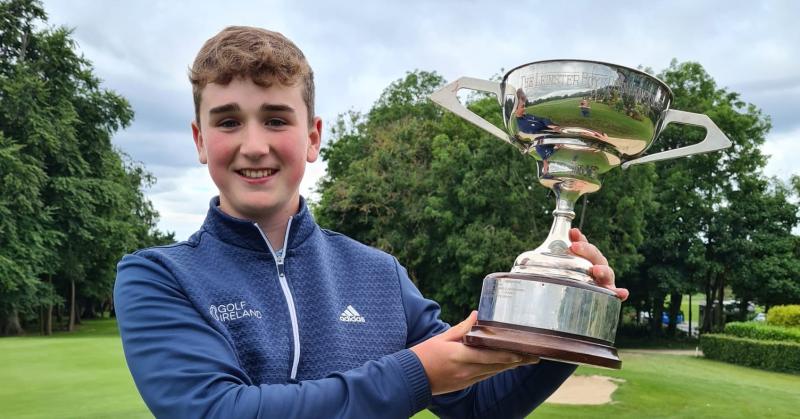 Evan Monaghan, with his trophy.

A VERY talented and promising Offaly golfer had a big win recently. Evan Monaghan, from Killina, Rahan won the U-17 section at the Leinster U-18 Boys Amateur Open in Malahide, finishing a very good tied 6th overall.

15 years of age, Evan took up golf at seven years of age and has made huge progress since then as his handicap has gone from 28 to +1.

A member of both Tullamore and Esker Hills Golf Clubs and a student at Killina Presentation Secondary School – he will be doing his Junior Certificate next year -, he has shown vast improvement in the past couple of years.

This year, he played for Ireland as they won a quadrangular tournament in Wales, competing against Wales, Scotland and the Netherlands at Pyle and Kenfig Golf Club.

He finished joint second at the Munster U-16 Boys Open Championship in Clonmel while he won the Leinster U-16 close championship at 14 years of age in 2021.

The son of Brian and Mary Monaghan, he was a member of the Leinster team that won the U-14 inter-provincial championship in 2021 while he was a key member of the Tullamore Golf Club teams that won the All-Ireland Boys Inter Clubs in 2018 and 2019 - at just 11 and 12 years of age.