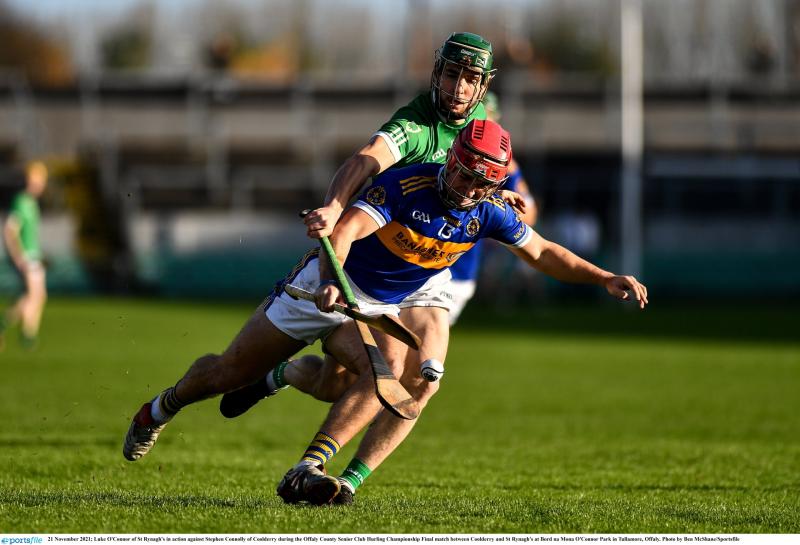 ST Ryangh's will need to display a good bit of improvement if they are to prolong their season when they meet Kilkenny kingpins Ballyhale Shamrocks in the Leinster Club Senior Hurling Championship on Sunday.

Home advantage in O'Connor Park, Tullamore is a big help to St Rynagh's but they will have to play much better than they did in the county final if they are to take out the provincial favourites.

St Rynagh's really got out of jail in the Offaly final against Coolderry. They didn't find their best form on the day and it took an injury time goal from Stephen Quirke to give them a dramatic 1-11 to 0-12 win.

Coolderry had played most of the hurling in the second half and St Rynagh's would have had no grounds for complaint if they had been beaten. However, they displayed real courage and tenacity when things were going against them, kept going and they eventually got the result. There had been a common perception in the build up to the final that if St Rynagh's were to win, it would be handy enough and that Coolderry would take a tight game. The Banagher based club made a mockery of that even if they did survive by their wits.

It was a huge result for St Rynagh's as they completed three in a row for the first time since the 1970s and they are now in bonus territory. They are underdogs here and outside of their own internal ambitions, there is no real confidence outside their club that they can annex the provincial title. They do have plenty to lose but St Rynagh's are in the ideal position coming in here and can go out and attack Ballyhale with a sense of freedom, an absence of fear.

At the same time, there are plenty of doubts surrounding them. They were resoundingly beaten by Birr in their last group game, even though their safe passage to the semi-finals had been assured. They did well to beat Kilcormac-Killoughey in the semi-final but again, they lived dangerously and the losers had ample chances to have won.

It is possibly their least convincing run of form during their great three in a row run and it suggests that they may be a tired team, in need of a break. They are very much the best club side in Offaly but some of their team have a good bit of mileage up and are running on empty at the moment.

They can't be ruled out and have a decent outside chance. Ballyhale Shamrocks didn't have everything their own way as they beat Carlow champions Mount Leinster Rangers in Carlow last Saturday. Ballyhale were worthy 0-22 to 0-16 winners but Mount Leinster pushed them hard in the second half. They got the gap back to three points with two minutes left and had a chance but Ballyhale finished powerfully with the last three points.

It suggests that St Rynagh's will be very competitive and they will be hungry for the win. They have had time to get good training in after celebrating their county final success and taking the Leinster championship would really be the crowning glory on a great run for the club.

St Rynagh's are capable of a big performance. They have been a real force of nature in Offaly over the past few years, they are relentless in the way they perform and they are so strong. Conditions are never perfect at this time of year but St Rynagh's prosper when hurling is at its rawest and most physical. Ballyhale, however, are justifiably favourites, and warm enough ones at that. The form book points towards them winning and St Rynagh's will have to produce the performance of their lifes to get the result.