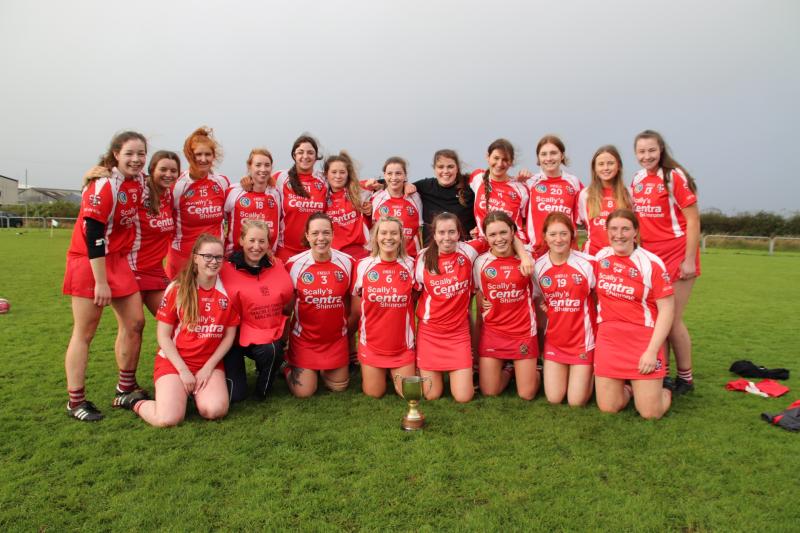 The Shinrone team that won the junior championship.

The weekend started with the HQ Physio Junior B Final between Tullamore and Birr being played under the fabulous floodlit facilities in Shannonbridge on Friday evening.  It is a novel situation this year for teams to find themselves playing under floodlights but both teams took on the challenge well and served up an excellent game of camogie with Tullamore taking the spoils to add to their Intermediate title that they won recently.

The HQ Physio Junior A Final was played on Saturday afternoon in conditions that were far from pleasant when Shinrone and St Rynaghs lined out in Crinkle.  In fact the wet and windy conditions made it a game of two halves where Shinrone played with the wind in the first half and built up a lead and the question was would that lead be sufficient enough once St Rynaghs got their opportunity to have the wind on their backs.  It turned out that the Shinrone first half lead was enough but only just, as going into the last few minutes there was just a point between the teams.  St Rynaghs threw the proverbial kitchen sink at their opponents but were unable to get the equaliser as Shinrone were crowned Junior A Champions for 2021.

It was a good day for Shinrone in Crinkle on Saturday as their Under 13 team started the day when they played Birr in the Under 13B Shield.  It seemed almost cruel to have a final for young girls played in such wet and windy conditions but given the time of year and the calendar of events, teams cannot avail of a luxury to reschedule.  While Birr battled well it was Shinrone that ran out victors and Offaly Captain, Orlagh Kirwan was on hand to present the shield afterwards to the Shinrone team.

In Killeigh, Kilcormac/Killoughey took on St Sinchill's, where the visitors pipped their hosts by just two points to win the Under 13BB Final on a scoreline of 1-3 to 1-1.

Finally, on Sunday morning Kinnitty welcomed Lusmagh/Drumcullen to the Kinnitty GAA Grounds to play the Under 13A Shield Final.  Unfortunately for the hosts, Lusmagh/Drumcullen were dominant and ran out comfortable winners in a rather one sided final.