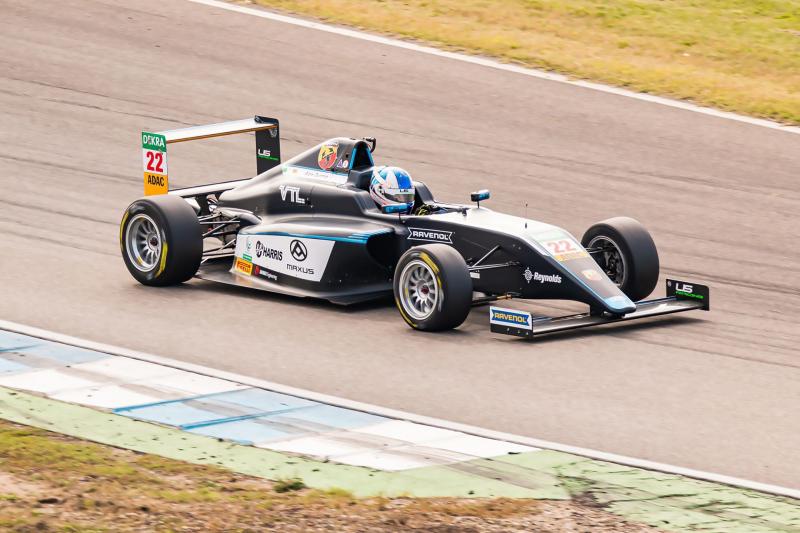 Offaly teenager Alex Dunne made an excellent German Formula 4 debut at Hockenheim last weekend as he got back on track following a two-month break.

Impressing his new team, US Racing, the youngster took two second place finishes, along with the fastest lap in race two, to finish the weekend as top rookie.

Despite his lack of experience in the series, Dunne stunned the championship regulars with his pace as he took top spot in both of Friday’s practice sessions. Alex continued to show his pace in Saturday’s qualifying, as he topped the time sheets for much of both sessions before narrowly missing out on a pair of front row starts.

The opening race saw Alex make a good getaway to maintain his third starting position but he was immediately looking for an opportunity to move up a place. The battle over second allowed the leader to open up an early advantage and by the time Alex had grabbed the place the leader had a significant gap which the 15-year-old Irish driver was unable to close.

At the end of the long 30-minute race Dunne was secure in second, impressively beating his more experienced US Racing teammates and finishing well clear of the other rookies in the race.

Starting third again in race two, Dunne once again got away well but got pushed back to fourth place at the end of lap one. The Clonbullogue resident was in determined form and moved back into third on lap three, before closing in on the lead battle.

At one-third distance, Alex pulled off a brilliant passing manoeuvre to take second and then set off after the leader. As in race one, the closeness of the competition meant that, despite setting the fastest lap, Alex was not able to close enough on the leader and had to settle for another impressive runner-up spot.

With the top eight reversed for race three, Dunne lined up seventh and was looking forward to another fight back, until disaster struck at the start of the warm-up lap. As the US Racing driver got moving, another driver swept across from the opposite side of the grid and hit his front wheel, causing enough damage to put the rookie out of the race.

Speaking after his debut German F4 weekend Alex Dunne said: “I’m extremely happy with my weekend's work. It was my first race weekend with US Racing and my first at Hockenheim, so I was delighted to be quickest in free practice. But for a couple of small errors in qualifying, I would have also had two pole positions, but that just goes to show how competitive the series is.

"To come away with two second places, two rookie class wins and fastest lap in race two is a great result it’s just a pity I did not make the grid in race three due to a bad error by another driver. I have to thank the team and my engineer, we worked really well together and I really enjoyed it. Thanks also have to go to the Harris Group, Maxus, VTL, Reynolds Logistics, Artisan Marble, PDS Associates, Xpress Health and Motorsport Ireland who have all stuck with me while I was unable to race.”

Alex Dunne will be back in action in the German F4 Championship, once again at Hockenheim, on October 22 to 24.