Disappointed Offaly in relegation battle after defeat to Wexford 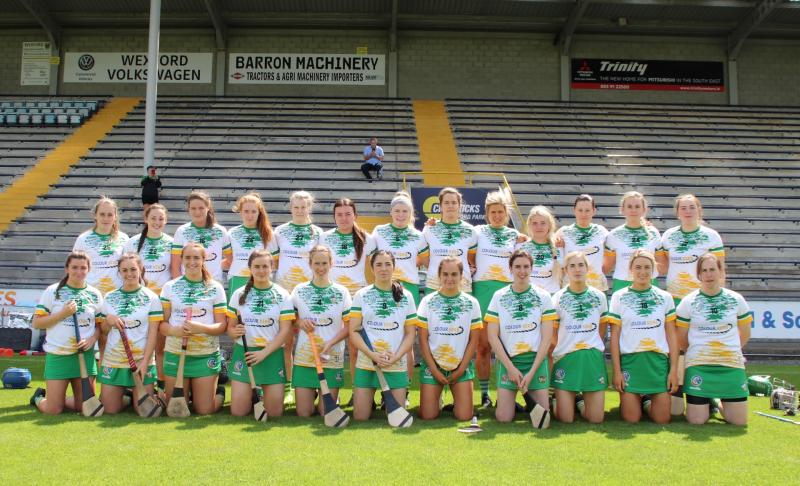 Offaly’s Senior Camogie panel travelled to Wexford on Saturday in the hope of picking up their first win of this year’s championship having lost in their opening encounter.  Last year’s meeting against Wexford saw Offaly lose narrowly to the Slaneysiders having reduced a sizeable to be pipped only to lose out by a point.

Susan Earner made just the one change to the side that started against Tipperary with Drumcullen’s  Kaitlyn Kennedy starting in place of Siobhan Flannery.

Offaly started the game playing with the breeze, however, it was Wexford that got off to the dream start with Joanne Dillon finding the net after just 30 seconds.  Wexford went on to add 2 points to their tally before Offaly’s first score of the match would come from a free pointed by Mairead Teehan.  Offaly were then rocked when Wexford’s Chloe Fox hit home for her team’s second goal of the game

The Offaly team were struggling to get any rhythm going and make any headway in the game but  Mairead Teehan did add two more frees before Wexford replied with another point.  In the 14th minute Aisling Brennan hit over for Offaly’s opening score from play but Wexford swiftly replied to leave them leading at the water break on a score of 2-5 to 0-4.

The second quarter was most definitely Offaly’s purple patch which saw them outscore Wexford by 4 points to 2. Offaly’s points came from three Mairead Teehan frees and a point from play from Kate Kenny.  Offaly keeper, Mairead Jennings was doing her bit to keep her team in the game when she blocked three goal chances on the trot to leave Wexford leading at half time by five points

After the break the Offaly forwards put the Wexford defence under great pressure with Kaitlyn Kennedy, Grainne Egan and Kate Kenny all scoring points from play.  It wasn’t until the 15th minute that Wexford opened their second half account with a point coming from Chloe Fox and shortly followed by another Anais Curran, leaving the score at the second water break Wexford 2-9 Offaly 0-11.

After the water break Mairead Teehan pointed another free and despite Wexford substitute Linda Bolger replying there was a feeling that Offaly were now in with a good chance of reeling in the Wexford lead.  However, Offaly were hit with a hammer blow when referee awarded a soft penalty to Wexford much to the dismay of the Faithful girls.  Wexford converted the penalty and then swiftly killed any hope Offaly had when Mag Byrne added her team’s fourth goal.

The Offaly team refused to lie down and battled on to hit the final 3 scores of the match with Kate Kenny pointing twice and Mairead Teehan converting a 45.

When asked for her thoughts on the game, Offaly Manager Susan Earner said that both the players and management were extremely dissapointed after the defeat.  She acknowledged that the poor start for her team made it difficult for them but that when they started to find passes and play the way they are capable of playing they managed to bring the game back to a 2 point game. She went on to say that her team had all the momentum in the first quarter of the second half but felt the penalty that was awarded to Wexford was “bizzare” and swung momentum in favour of the home team.  She felt her team was unlucky not to be awarded a penalty also but it wasn’t to be.

She now looks forward to next weekend's match against Limerick and while both teams are out of the championship she emphasises the importance of the clash as a win will help her team avoid relegation.  She says her team will focus on starting well next weekend and minimising goal threats.  She went on to say that she knows there is more in this Offaly team. They just need to prove it next weekend