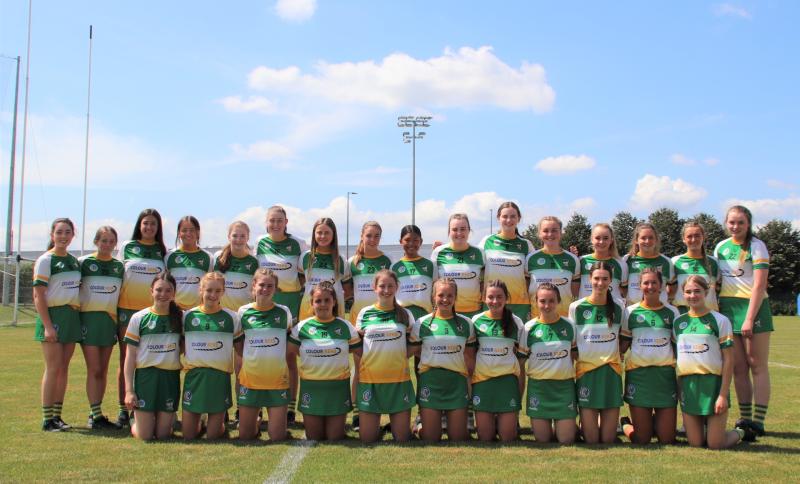 The Offaly Minor team opened their championship campaign against Laois in Portlaoise’s Centre of Excellence on Sunday last.

In sweltering heat and a light wind, it was Laois who registered the first point of the game, but Offaly replied quickly with two points from Clodagh Leahy and Cayla Fletcher to settle them nicely into the game.

Laois then rocked the Offaly girls when they hit two goals in the space of a minute, howeveR,  a goal from Faye Mulrooney reduced the deficit for Offaly.  Both teams added two points before the water break with Clodagh Leahy hitting both for Offaly to leave the score at Laois 2-3, Offaly 1-6.  During the water break Offaly were forced into making a substitution when Chloe Hennessy, who had picked up an injury, was replaced by St Cillian’s Cara Hoare.

After the break, Laois hit two early points but Offaly responded well with a point from Faye Mulrooney and free from Clodagh Leahy to level the scores again.  Mulrooney then put the Offaly girls in front before the half time break with a well taken goal.

It was Offaly who started better in the second half with a point from Grace Leonard and a further pointed free from Clodagh Leahy. Laois then hit a purple patch scoring five unanswered points to level the game.

With the game now in the melting pot, a well worked ball up the field to Faye Mulrooney resulted in another goal for the Birr girl.

A further pointed free by Clodagh left Offaly four points ahead but Laois refused to lie down and hit back with another goal two minutes into injury time.  With just minutes left on the clock the tension was unbearable but Offaly managed to see the game out and win by a solitary point.