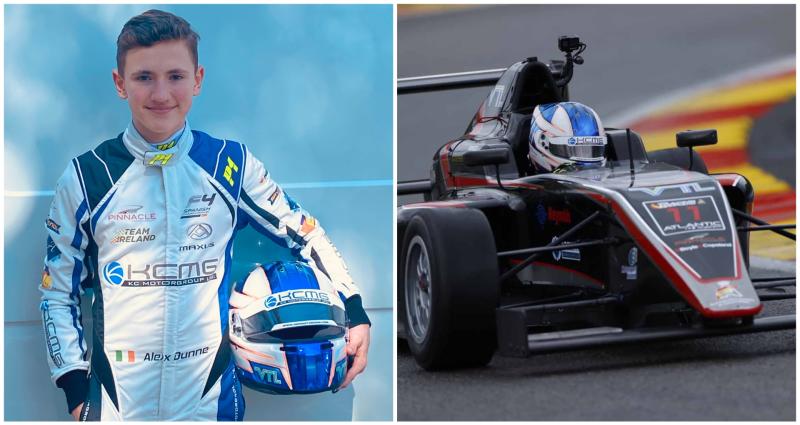 The 15-year-old Clonbullogue driver competes in the second event of the FIA Spanish F4 Championship, where he will contest three more rounds of the Formula 1 feeder series.

Alex heads to Spain on the back of an outstanding debut race weekend at Spa Francorchamps, at the end of April. At the Belgian Grand Prix venue, he stunned the F4 paddock with a debut pole position and a podium finish in his first car race.

Another strong performance in race two resulted in fifth place and the Irish youngster left the opening event of the season lying in an impressive fifth in the championship standings.

Following the season opener, the KCMG academy-backed racer headed to Navarra for two days of testing, along with his team, Pinnacle Motorsport, in preparation for this weekend's event. Alex worked through a number of set-up options in advance of the second triple-header of the year and is now looking forward to another strong weekend.

“We've been to Navarra twice now and I’m happy that we are in even better shape than we were at the opening event of the season,” said Alex as he prepared for his second F4 event.

“My aim this weekend is to battle at the front once again and pick up another strong haul of championship points. The opening race weekend was very challenging with changes in the weather and a number of safety car periods, as well as having to undergo my first ever standing starts.

"I have a lot more knowledge now and I will be much better prepared for the race weekend format as well as knowing what to expect in the races. Thanks once again to my Mam and Dad and all of my sponsors who have made my F4 season possible.”

Event two of the F4 Spanish Championship commences on Saturday morning, with the first of two free practice sessions. Qualifying for Race one takes place on Saturday afternoon with the opening race of the weekend at the unusually late time of 19:00. A second qualifying session will run on Sunday morning which will decide the grid for both of Sunday’s races.

All of the weekend’s action can be followed on www.F4Spain.org with live timing from practice and qualifying and live streaming of the races. Information on Alex Dunne can also be found on his web site www.alexdunneracing.com and on his social channels.