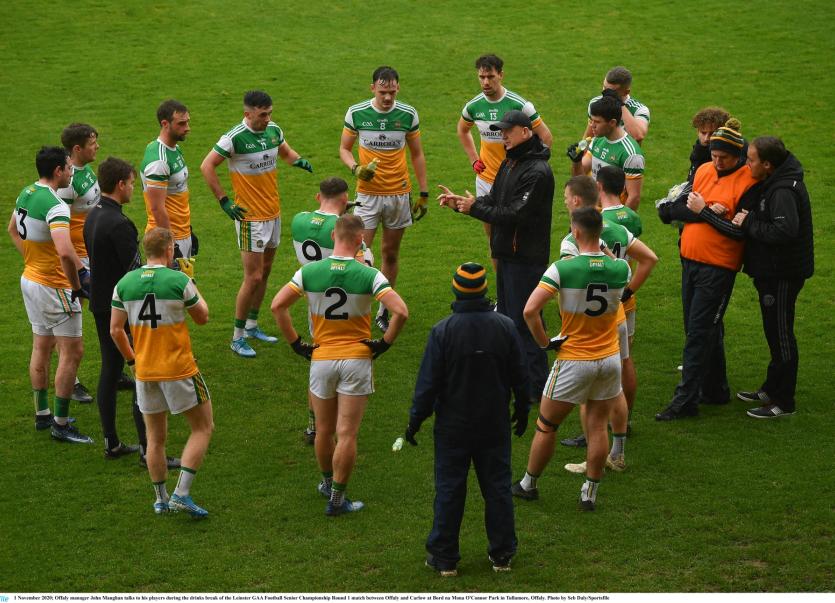 PROMOTION from Division 3 of the National Football League is the early season target for Offaly manager John Maughan as he faces into his third season in charge.

“Offaly should be looking at promotion if they want to progress,” the Mayo man commented last week. Offaly are drawn in Division 3 south of the National Football League where they travel to Wicklow next Sunday and then have two home games against Limerick and Tipperary.

With the two games at home and the top two going into the semi-final, Offaly have a real chance of getting into the promotion mix. Maughan acknowledged the importance of hitting the ground running and he admitted that there will be pressure in each game. “There will be pressure and we accept that. That is the beauty of it, the competitive aspect of it. I've gone down to Aughrim in the past with teams and it is a cauldron. We respect it.

“Limerick should have beaten Tipp last year and Tipp ended up as Munster champions. Limerick had them by the throat, they just didn't squeeze hard enough. It went to extra time and their performance was quite superb. Tipperary made a poor start against Mayo in the All-Ireland semi-final last year and they competed after that. They won Munster and the bounce they will get from that is big.”

The former Mayo, Clare, Roscommon and Fermanagh manager was thrilled when counties got the go ahead to go back training after the long Covid-19 shutdown.

“We are privileged. There was a great level of excitement in the squad. Lads were delighted to be mingling and mixing with one another. Social interaction is essential for young sports people in particular and I could sense their excitement. The senior hurlers and the camogie team were there the same night and there was a lovely atmosphere. I felt very privileged in that moment. Even though I don't enjoy the drive, I enjoy the occasion every time.”

Before collective training resumed, he kept in contact with his squad through zoom meetings and each player was given individual programmes. “The modern inter-county footballer is akin to a professional athlete. Training is part of a very structured life. They train 3-4 times a week, follow propgrammes. They are involved collectively and it is very difficult when that is taken away. It was difficult for all but we recognise we are privileged because many others are not allowed to train together outdoors.”

He was delighted to meet all the players again, laughing at the long hair some of them sported. He had a special welcome for his most experienced player, Niall McNamee. “That is just a good news story because he is an iconic figure in Offaly football. He is very highly respected and regarded. He does not ordinarily have a lot to say but when he does, everyone listens. The young guys look up to him and I wish he continues on. I played a 37 year old and a 4-0 year old in an All-Ireland semi-final in Croke Park. Age is just a numbr and Niall looks after himself very well.”

Bill Carroll, Jack Bryant, Ciaran Donnelly, Jack Quinn and Cathal Donoghue are among the young players added to the panel but he is does not to expect to have much room for experimentation in a condensed league programme.

“They are all talented. They are very keep and have worked extremely hard. The transformation in Jack Quinn alone has been inspirational. It is all very exciting. The unfortunate thing is the league is critical and we are caught between whether we can afford to gamble or not. The O'Byrne Cup would have been perfect for that. We can't gamble to a large extent. I hope the next few weeks will be sufficient to look at guys and see.”

Ferbane forward Joe Maher has been brought back onto the panel. It looked like there would be no return for him after he didn't come in for 2019 but Maughan explained:

“It was based on performance. I watched a lot of club football last year and on the occasions I saw him play, I said he could offer something. That is what we look at. I am not into the semantics of something or history. I had no axe to grind with Joe. I invited him in two years ago and he couldn't make the commitment. That is fine. He sent out a lot of smoke signals last year that he had the time now and was prepared to commit. He is as welcome back as any of the others.”

He is concerned about injuries – Cian Johnson is recovering from gilmore groin surgery while Niall McNamee dislocated his finger in training and Cathal Donoghue has a knee injury.

“I hope we will have thirty fit lads at any time and if we have to supplement others, we will do so. Guys will always get injured. Last Sunday I was very worried that Niall McNamee had a serious injury. Thankfully and thanks to the staff, a nasty finger injury was sorted very quickly. I thought it was a bad fracture and I thought it would finish him but it turned out to be a bad dislocation.

“Cathal Donoghue went down on his knee and I thought, oh God, his season is over. You would be concerned because lads are so enthusiastic. I know myself how desperate it is when you get a bad injury and how it affects you. You are waiting for so long and you just want to get out to play. The panel will evolve and we will supplement it and bring in players. If we see something exciting, we will jump that person into the squad.”

Maughan feels that things are changing in Offaly and he referred to the recent announcement of a partnership with golfer Shane Lowry. “That was exciting news. That is inspirational and exciting and it gives an indication of where Offaly GAA is heading. They are heading in the right direction. There will be more GPOs (coaches) appointed in clubs. We all want to be a part of that. We have proved we can compete, albeit not getting over the line against Kildare and Meath (in the championship in the last two years). Both were winnable and we were not far off it.”

Louth await them in the championship and he expects them to be a different proposition with Tyrone legend Mickey Harte in charge of them. “They will get a bounce from new management but that is a battle down the road. We are focusing on our first league games. They are all winnable. We are capable of winning them. If things go well, we get our best 25 toggd out and injury free, we will be chasing promotion.”

He spoke about Harte and Louth. “I heard they sold 26,000 tickets in their house draw whichis an incredible amount of money. It shows where their aspirations are. They have a high profile manager and coach. It shows they mean business.”

Maughan concluded: “It is a good time in Offaly. I sense something is happening. Clubs are getting involved. The Grand Canal walk was an indication people are interested in the team and want to move on. Shane Lowry is putting his shoulder to the wheel with underage development. That is what we are looking for. It is just fantastic. It is an indication of the man and the Lowry family. They are steeped in and immersed in the whole scene here. I played with Sean (Lowry) in Crossmolina. Offaly GAA people are thrilled and excited that he is assisting in this way. Players are so excited by it and it is great to see.”