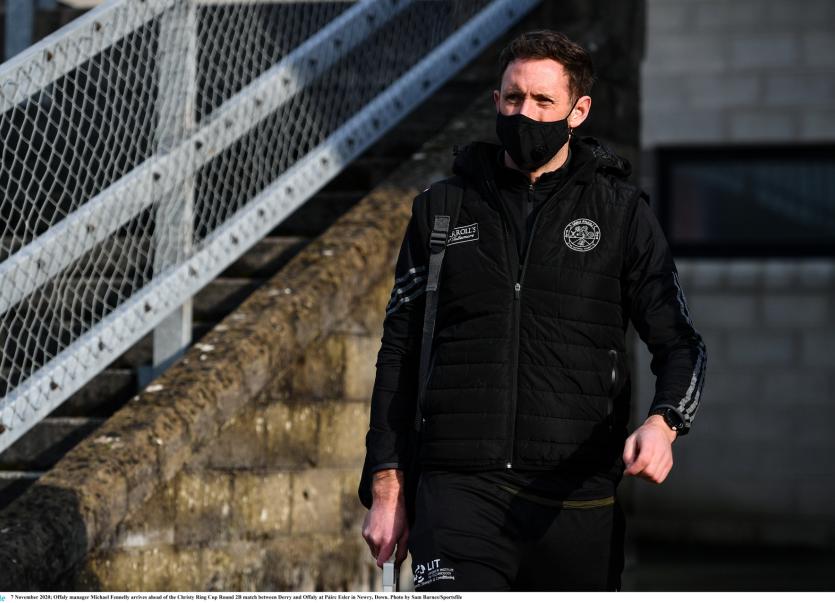 THERE may be a new broom at the helm in Offaly GAA but Michael Fennelly will still be very aware of the county's record of impatience with county football and hurling managers. Despite that, the former Kilkenny star is very much focused on the long term future and development of players.

Offaly have been notoriously impatient with managers for severals years now. Several managers have been ditched by the county after one year or in mid-season in both codes since the 1990s and Fennelly steps into an environment where the county is desperately searching for hurling answers.

It may have been coming a long time but relegation to hurling's third tier, the Christy Ring Cup was a bitter pill to swallow for all in Offaly. Failure to win it last year demonstated exactly why Offaly are there and it means that there is pressure on players and management this year. With Down and Kildare gone up to the Joe McDonagh Cup, Offaly find themselves in the Christy Ring Cup with Sligo, Wicklow, Roscommon and Derry. Like a dog being kicked by a cruel owner, Offaly hurling lovers have grown accustomed to trauma in recent years but a third season in the Ring Cup would be hard to take.

They will be warm favourites to win and this year is all about championship for Offaly. They are in Division 2A of the National Hurling League where they play four Joe McDonagh Cup teams, Meath, Kerry, Carlow and Down while their only Christy Ring Cup opposition is Wicklow. While Offaly could go well in the league, the real pressure surrounds the championship.

Former Offaly star Michael Duignan is now the County Board chairman with plenty of new faces on the Management Committee and there is no evidence yet that they are as intolerant as some of their predecessors when it comes to management. Fennelly, however, will find himself skating on thin ice if Offaly spend a third season in the doldrums but he is not letting this interfere with his vision for Offaly hurling.

“A long term vision is needed. Younger players have come in and we are looking to the future. It is not a short term thing, it is a 3-5 year plan for Offaly hurling. It has to be this way. We can't be selfish and think of only one year,” he said.

Fennelly outlined: “We are building foundations and we have more work to do. A third of the panel needs developing. “

He is working with a largely new panel this year. Cillian Kiely was the big name withdrawal from last year's panel and several others left due to a variety of reasons. A number of last year's U-20s have been added while other players have been brought in.

He is working with a panel of 36 and it is “always open”, Stated Fennelly: “The average age is 24 which shows the youth that is there. There is a nice mixture of youth and old. Shane Dooley is in his 15th season. Brian Watkins is a similar age. Shane Kinsella and Damien Egan are around the 30 mark. They are good lads, really dedicated and leaders.”

The Ballyhale Shamrocks club man was certainly shown how long the road is when Offaly lost to Down in the Christy Ring Cup semi-final on penalties in Newry last year. It was a bitter pill to swallow. “You learn from failure and I hope it will make them more hungry. Down are a decent team. They are in the Joe McDonagh Cup now and are well equipped. They could rattle a few teams. They are in a good place. It was tough but that is sport. There is no written script and you have to do it for 70, 80 or 90 minutes as it was in that case and then on penalties.”

This year Offaly are drawn in the one team Christy Ring Cup group with Sligo. The winners go into a semi-final while the losers have an escape chute, a quarter-final against the third team in the other group. Fennelly would prefer more group games but said: “That is the nature of the draw and that is the amount of teams there. We are content enough. The draw is the draw. There is a minimum of two games and that is positibve. If we lose, we do have another shot. It's a draw and it is fine, we will get on with it.”

He found it challenging to keep players ticking over during the long Winter-Spring lockdown. Initially, they let players have time off after that traumatic Down defeat and players were given gym and training programmes for the middle of January. They had a break at the end of February, resumed in March and have continued then until collective training was permitted again a couple of weeks ago.

“It was very difficult for players to keep motivated,” he admitted. Access to gym facilities and pitches was a problem for some players. With dark evenings, some players couldn't get pitches with lights after returning home from work and ended up running on roads, something Fennelly quickly quashed when he learnt of it. “It was very challenging, even finding a patch of grass in the dark. Some lads were fortunate, students, and could run during the day when they didn't have classes. Everyone found it difficult in different ways.”

They tried to make it work by giving gym equipment to some players while others invested in their own – which was something Fennelly was delighted to see. Now that they are back collectively, the intensity is being ramped up several notches and he is happy that they are in “decent shape” with a “nice chronic load built up”.

He acknowledged: “Some players have not the same running done as others because of their circumstances. We are trying to balance it all.”

He is adamant that there is no pressure around their league games with so many Joe McDonagh Cup teams in opposition. “Offaly are in a division below them and a third of the panel has changed. Younger players, the U-20s, are looking to develop and they can't develop in three weeks. They can't play challenges and it is very restricted. A third of the panel is new and that takes a lot of time. There won't be huge changes in three to four months. They need training and games without pressure.”

Fennelly is very happy with the attitude of his 36 players. “We have a bunch of really committed and ambitious players. They have a lot of drive to be better and to do better. That is a good starting point whether you are a Liam McCarthy, Joe McDonagh or Christy Ring Cup team. Covid has restricted everyone massively but especially for a county like Offaly who is in transition. The Tipp's, Galway's and others have mature players and they quickly go back to that level. We have a lot of younger players who need work.”

He stated that the emphasis is very much on the championship. “The championship is key to win and we are looking to win every game. The league has some really challenging games and will test players. It is positive to have those testing games and if we win games it will drive confidence and momentum. There is a lot of games in a short space of time. Staying injury free is a big part. If two or three key players got injured, it would affect them massively. The loss of one key player would be detrimental.”