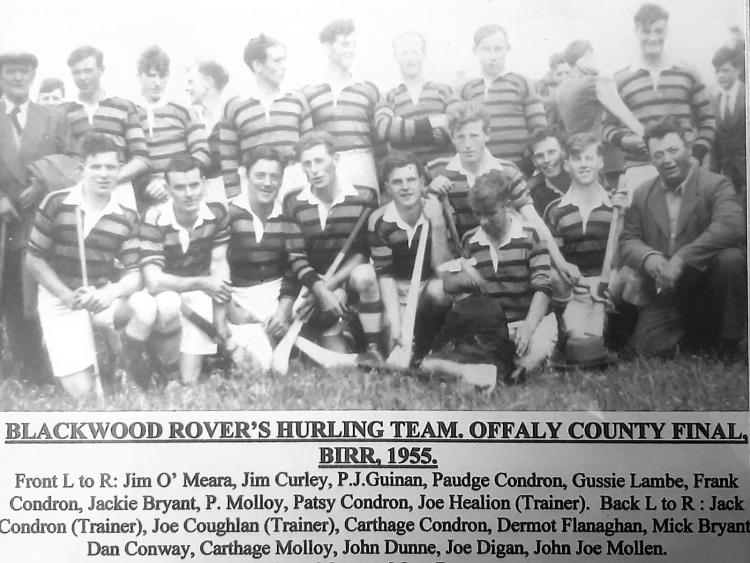 The Blackwood Rovers side beaten by Killavilla in the 1956 junior hurling final.

THEIR name has been spoken about more regularly for the wrong than the right reasons for decades and generations of Offaly GAA people have been spoon fed stories of their legend.

Blackwood Rovers' existence was a short one. They were one of dozens of clubs who came and went in Offaly over the years – clubs who flourished or just survived for brief spells in the decades following the 1884 formation of the GAA but disappeared off the map almost as quickly as they arrived.

Every parish in Offaly has had such clubs. Some were comparatively obscure and named for small townslands. Indeed, the existence of many has been lost in the mists of times, no written record surviving of their deeds and personnel. Some won titles and their presence on the Offaly GAA rolls of honours raises occasional questions about where they were and who they were but many scarcely even survive in folklore.

Blackwood Rovers really should have been one of these clubs. They were in existence for less than a decade and they didn't win a solitary title, yet their name has been spoken with an almost sense of reverence for several years. A notoriously tough hurling team, they were famed for the dark arts of the ancient game and the antics of both their players and supporters.

People have feasted on stories of their feats and incidents and like a lot of these type of legends, a mixture of fiction, fact and gross exaggeration accompanies them. Separating fact from fiction and getting to the real truth is no easy task with Blackwood Rovers – while they were certainly involved in unsavoury games and incidents and some of their personnel did most to build the tall tales by adding to the stories, history may be treating them rather harshly.

There are certain indisputable facts about Blackwood Rovers alojng with stories that are open to perception.

They were formed in 1956 and they were gone out of existence by 1965 so their life span was a mere nine years. They were a definite breakaway from the then main club in their parish, Rahan and when they disbanded, they did so as the parish united once again.

They were named for Blackwood forest, a spawling wooded area between Glaskill and Roscore, almost reaching the Blueball, that you can access from the Mucklagh to Rahan road, about a mile from Screggan Cross. Their players came mainly from the Agall, Glaskill, Roscore and Screggan townslands, though their influence did reach much further than this and their players included ones from Mucklagh and deep into Rahan territory.

As you can imagine, their formation did not go down well with everyone in the parish and Rahan in particular lost some very good hurlers to them. It also seems that one of the motives for their formation was discontent at the opportunities given to some of their players with Rahan. Whatever, the truth, Rahan had a strong hurling team at the time. They had been well beaten in a number of senior county hurling finals in the early decades and the closest they went to winning was in 1953 when Coolderry beat them by 4-4 to 1-6.

Whatever the reasons behind their formation, Blackwood Rovers hit the ground running and they reached the 1956 Junior Hurling Championship final where Killavilla Rovers were too strong in a feast of goals, 4-6 to 4-1. This final gives an insight into the type of fare that went with some Blackwood matches. There were a number of pitch invasions by spectators, one after a Killavilla player was struck on the ground and another near the end when the winning goalkeeper was forced over the end line for a '70'. As the final whistle went, there was another rush for the Killavilla goal but that final was positively tame compared to some of what followed.

Considering the way their name has persevered, it seems strange to note that Blackwood were never anything more than a junior hurling club and they never won a championsip. They were, however, a very good junior hurling club and they were unlucky not to win a championship. They were a particularly potent force in the early to mid 1960s when they competed in three out of foour finals, losing each of them – 1960, 1961 and 1963 and the reason that they didn't make a fourth in 1962 is that both them and Killoughey were thrown out by the Offaly GAA County Board after an absolutely rancorous encounter.

Their rivalry with Killoughey is part of the reason that their legend has proved so enduring. Two neighbouring clubs with plenty of people who would have socialised and worked together in Bord na Mona and other places, they had a quite ferocious rivalry. They met five times between 1958 and 1963 with Killoughey winning in 1958 and Blackwood gaining revenge in 1959. In 1961, Blackwood again defeated their great rivals but things erupted quite spectacularly in that 1962 clash. There were a number of violent incidents duing the game, ones of “bad taste” and after the game was abandoned near the end, there was a free for all with players and spectators and flying fists, boots and hurleys.

The referee was a famous Tullamore hurling man Eamon Fox. Eamon Fox's remarkably descriptive referee's report was published in local papers after it was dealt with at a North Offaly Board meeting – the normal procedure in that era. It tells about him warning players for “not concentrating on the ball”, a Killoughey player pulling “vicious strokes of a hurley at an opposing player's head”, a Blackwood supporter, a brother of a player, rushing and hitting that player as the referee was taking his name. It outlined umpires being struck, how Killoughey “had no intention of hurling”, a Blackwood player rolling on the ground in “agony”, a sent off Killoughey player returning to the field to strike again later in the game and much more.

After abandoning the game, the referee was charged at by two Killoughey players and had to be protected by his own club members and as he made his way to safety, he noticed a milling throng and a few fights breaking out. By all accounts, there were plenty of bruises and aches after the game while one Blackwood player sustained a fractured arm and wrist.

Blackwood were home and dry, leading by 6-3 to 1-2 with just seven minutes left when the game was abandoned, yet they were thrown out and suspended for six months along with Killoughey, even though the referee's report certainly suggested that they were more sinned against than sinners on this occasion. Both clubs put forward strong cases to be granted a reprieve with claims and counter claims made before it was decided that both must pay the full price for their actions.

There were other occasions when Blackwood were the architect of their own misfortunes. Their entire full back line was sent off in their 1960 county final defeat by Kilcormac but it is also important to acknowledge that sending offs and fractious encounters was not unusual in Offaly hurling at that time.

Indeed, Offaly club hurling was notoriously tough in the 1940s, '50s and '60s. At senior level, the rivalry between the then dominant forces Coolderry and Drumcullen has often been remembered for the wrong reasons and most clubs had a “take no prisoners” policy as a badge of honour. Things only began to truly change with the 1965 emergence of St Rynagh's but that is a story for another day.

St Rynagh's beat Blackwood Rovers in the 1963 junior hurling final and within a year, they were gone as the desire for unity in the parish became irresistible. In 1964 St Carthage's was formed, bringing together the four clubs in the parish at that time, Blackwood, the Island, Mucklagh and Rahan, and this yielded an instant dividend as the new club won the Junior Hurling Championship in 1965 – they beat an emerging Kinnitty that included a young Johnny Flaherty. St Carthage's went onto add junior and U-21 football titles in the following three years before reaching the senior football final in 1973 where they were pipped by Tullamore.

In the mean time, the legend of Blackwood Rovers gathered legs with each year – as memories dulled, the stories grew and were enhanced. The late Dick Conroy loved to regale listeners with stories about his reaction after being asked to referee a Blackwood and Killoughey game by then County Board secretary John Dowling (the late GAA president was an All-Ireland referee himself and he had taken charge of the 1956 junior final between Killavilla and Blackwood), replying: “My God John, what did I do to you”!. And with how he pulled back his hand after throwing in the ball and counted his fingers!!!

There is no doubt that Blackwood's hurling could be red raw and was not for the faint hearted but they also had some excellent junior hurlers. Men who loved the game, had a great passion for it and were good at it. Some of the best hurlers in Rahan parish played with them, they also trained with a regularity and intensity that was not normal at that time and a lot of their games went off without incident.

Indeed their team included one of the best Offaly players in the 1950s and '60s, Dermot Flanagan. A renowned defender, Flanagan played fifty league and championship games for Offaly senior hurlers from 1957 to 1970. He played mainly at full back and was on the Offaly side that was unlucky to lose to Kilkenny in the 1969 Leinster senior hurling final – by this stage, he was playing with Tullamore.

Flanagan was their best known hurler while another Johnny Minnock, who switched from Rahan, played 19 games for Offaly in the 1940s and '50s and it is important to also reflect on this type of quality. Blackwood Rovers certainly made a lasting impression during their brief time on the hurling fields in Offaly and there have been clubs with multiple titles that have been discussed yet.

A variety of sources have been used for this article on Blackwood Rovers: Local newspaper archives, the excellent Killoughey GAA club history, the official opening programme of Rahan GAA Club in the 1990s and a conversation with a Blackwood player, Carthage Minnock. A fuller account of Blackwood and other clubs in Rahan parish will be included in the Offaly GAA history that I am currently working on.