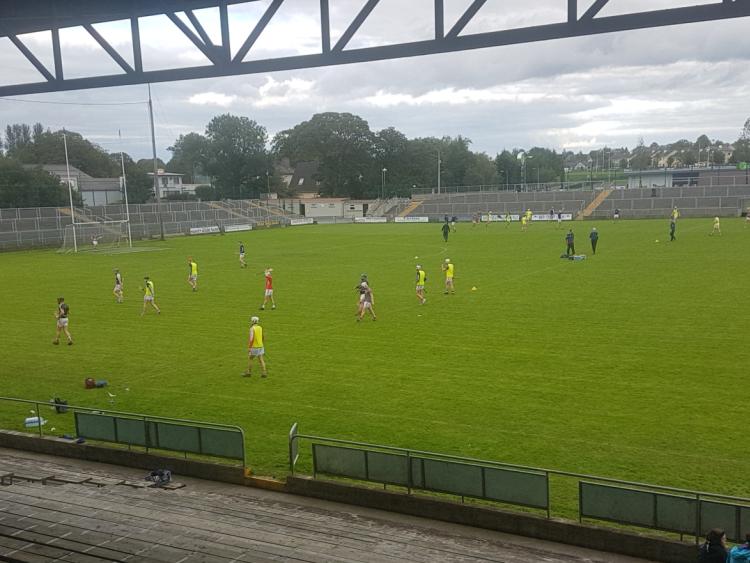 WITH both sides having points to prove after first round malfunctions, it was absolutely no surprise that an ethralling, tightly fought encounter should emerge when Belmont and Shinrone clashed in Birr today.

Belmont were poor in their first round defeat by St Rynagh's while Shinrone were fortunate to draw with Ballinamere and it meant that this was a must win game for both sides.

Ultimately Belmont proved to be the stronger in a game in which Shinrone matched them stride for stride in the first half. Level at half time, 1-10 to 0-13, Belmont proved to be the better team in the second half by a considerable distance, outscoring the losers by 1-12 to 0-8 for a win that was no where near as comfortable as the final scoreline suggests but was still quite impressive and fully deserved.

As David Nally and Killian Sampson engaged in a shootout from frees – Nally got eleven points, nine frees, Sampson slotted over 12, ten frees -, the difference between the teams was a magical display from Oisin Kelly. Belmont's star forward was at his sensational best – he scored six fantastic points from play and some of them were worth viewing the sixty minutes alone. He took on his man at every opportunity, used his power and speed to great effect and also sprayed some great passes around the place, both simple short ones and audacious long strikes.

The win sets Belmont up nicely now and they have a great chance of claiming a semi-final place, though an improving Ballinamere will be no formality at all in their final group game. Shinrone are staring a disappointing early exit in the face and meet champions St Rynagh's next, needing to beat them and hope that Ballinamere can get a result against Belmont.

The game got off to a high octane start and the sides were level on three occasions in the opening five minutes before points from Killian Sampson (free) and Sean Cleary put Shinrone 0-5 to 0-3 ahead.

Shinrone were the better side for a few minutes after this but were rocked when David Cox scored a Belmont goal out of nothing after gathering a free in the 12th minute. Sampson's free made it 1-3 to 0-6 at the water break.

It remained equally as tight in the second quarter with fortunes ebbing and flowing and neither side building up momentum for long enough to pull away. It was still all square at half time, 1-10 to 0-13 and that was a fair reflection of the way the first half went.

Belmont were a bit better in the second quarter with Oisin Kelly posing particular problems as he picked off some delightful points and used his speed and power to telling effect. Shinrone were 0-8 to 1-4 ahead after 18 minutes whern two David Nally frees and a great Kelly score from play pushed Belmont two clear. Shinrone equalised through a free from the inform Killian Sampon, Kelly edged Belmont ahead and then three on the trot put Shinrone 0-12 to 1-8 ahead.

A Nally free levelled it, Adrian Cleary put Shinrone ahead and the point of the half from Kelly when he tore into open ground and floated a beauty over on the run ensured it was all square at the break.

Shinrone went 0-15 to 1-11 ahead early in the second half but were then forced onto the back foot and were fortunate that Belmont didn't punish them fully. Leon Fox went for goal from a 21 metre free that could have been a penalty and it was comfortably saved while David Nally missed a free – Killian Sampson also missed a scoreable free at the other end.

Then Belmont found the range and points from Cathal Flynn, David Nally (free) and a super Oisin Kelly point put them 1-14 to 0-15 ahead. Conor Cleary made a super save to deny David Nally what really should have been a 42nd minute goal and at the three quarter way water break, Belmont were 1-16 to 0-17 ahead with Nally making amends with two opportunist points from play.

It was nip and tuck from here to the finish but Belmont always looked like getting there. Shinrone were back to level terms, 0-20 to 1-17 with ten minutes left but Belmont got the next four to take what proved to be a decisive four point lead with two minutes left. An injury time David Kenny goal after David Nally's shot was saved gave Belmont a 2-21 to 0-20 lead and that was that as they got the win they needed.