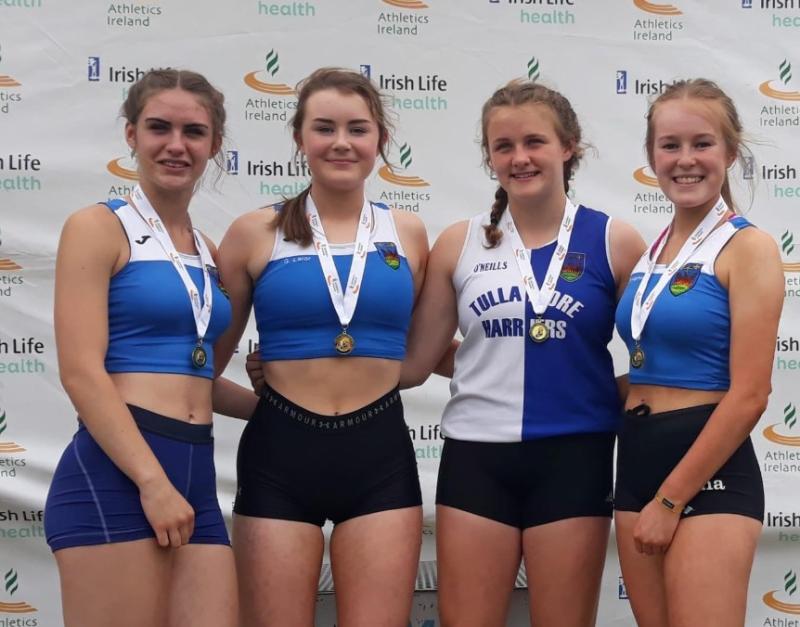 Katelyn Farrelly, Grainne Lalor, Shauna Slattery, and Kate Cunningham after winning the gold medal in the Girls U17 4 x 100m relays at the All Ireland Juvenile Athletic Championship

Having travelled to Baku, Azerbaijan on 18th July, Ava O’Connor laced up for her 1500m final on Saturday 27th July. She was fast out and was with the leaders in the first two laps which were run at an easy pace. Finding herself boxed in at 800m, Ava found a gap and got into the lead. 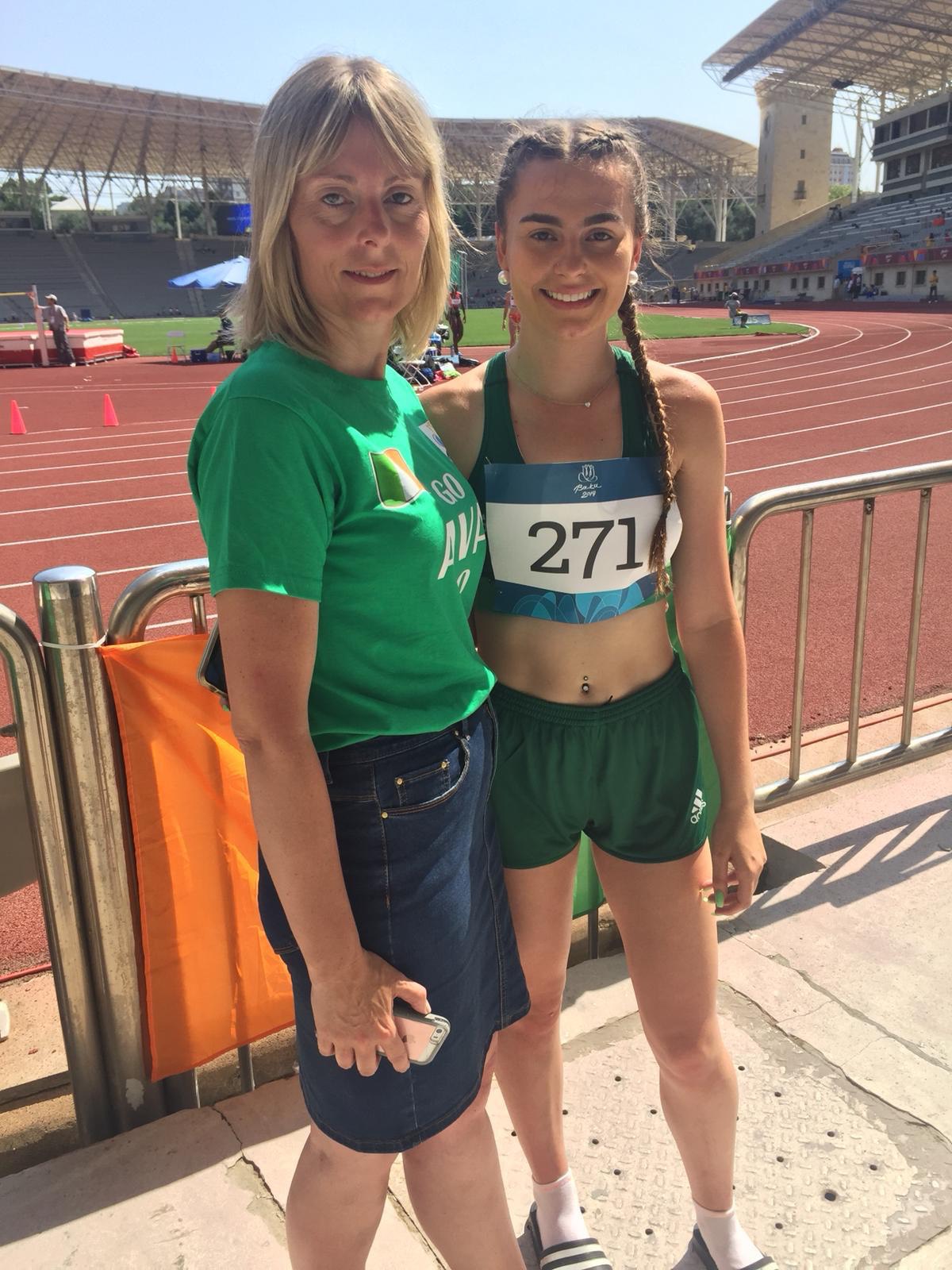 Ava O’Connor with her Mam Sinead after competing in the 1500m in the European Youth Olympicsin Baku, Azerbaijan

She led out the race then for the next lap and increased the pace significantly. In the final 200m Ava was passed by the leading pack but hung on for a great 07th place finish. Having come into the final ranked 12th, Ava’s determination and gutsy race tactics paid off as she was ahead of five of those ranked above her when the race finished.

The week was a huge learning experience for Ava and will stand her in good stead in the years ahead.

Mark Milner and Aaron Mangan competed in the National Senior 800m at the National Senior Track & Field Championships in Morton Stadium, Santry, held on the weekend of Saturday/Sunday 27th/28th July. Mark qualified automatically for the final from the second heat and Aaron was unlucky to narrowly miss out on a final spot coming 4th in his heat.  In the final, Mark was to the front from the start and right in the fast pace set by Dean Cronin from Cork. In the final 200m Mark was passed by Mark English and others from the chasing pack but he dug deep and hung in for 5th place in a time of 1.50:06. Great to see both young athletes competing on this national stage and in the years ahead we expect to see more great performances.

Well done to Liam Brady who was also in action in Santry at the National Championships. Liam had a superb run in the National Track 10k on Saturday 27th July, and was 5th finisher in 30.44. Great running Liam.

In 2015, four young girls made up the U13 4 x 100 relay team for the Leinster Championships held in Greystones, Co. Wicklow; Kate Cunningham, Katie Burke, Shauna Slattery and Katelyn Farrelly. Going into the competition, all was unknown about the competition and how they would perform but when the final was ran we knew we had something special. The girls took gold and also beat the Leinster record.

Unable to compete in the National Finals later in the 2015 season, it was 2016 when the team took the Leinster title again and also broke the record. This time they were to test themselves against the provincial best and indeed they did taking their first National title. In 2017 they repeated there Leinster win in Greystones and took silver in the National Finals.

2018 was an up and down season for the girls with a disqualification in the Leinster Championships in Leixlip, and 4th in the National Finals after been pipped at the line for bronze but the quality was still there and a senior ladies club record was made. The new season in 2019 saw an addition to the team with Grainne Lalor adding to their strength. In the early season, the girls took bronze in the Indoor 4 x 200, their first National Indoor medal, which was an indication of better to come and it did. On July 21st on home turf, at Tullamore Harriers Stadium, the girls took their second National title. Easily qualifying from their heat they stormed home with a convincing win in the final and also bettering their club record with 50:28. Well done ladies and keep up the great work.

Nine athletes took part in the National Juvenile B Championships on July 21st at our home stadium. All athletes put in super performances in each of their events. Our youngest competitor Laura Condron, in the U12 Girls 60m, was 3rd in her heat to qualify for the final where she finished in 7th in a closely contested final. Laura also competed in the Long Jump, her favourite event, and showed great promise in her ability finishing 5th with 368cm, only 10cm from bronze position. Five of our U13 athletes competed in the 60m Sprint; Teagan Delaney, Eimear Cotter, Orla Hanlon, Mia Merrick and Sam Merrick. All acquitted themselves very well and held their own against a quality field. 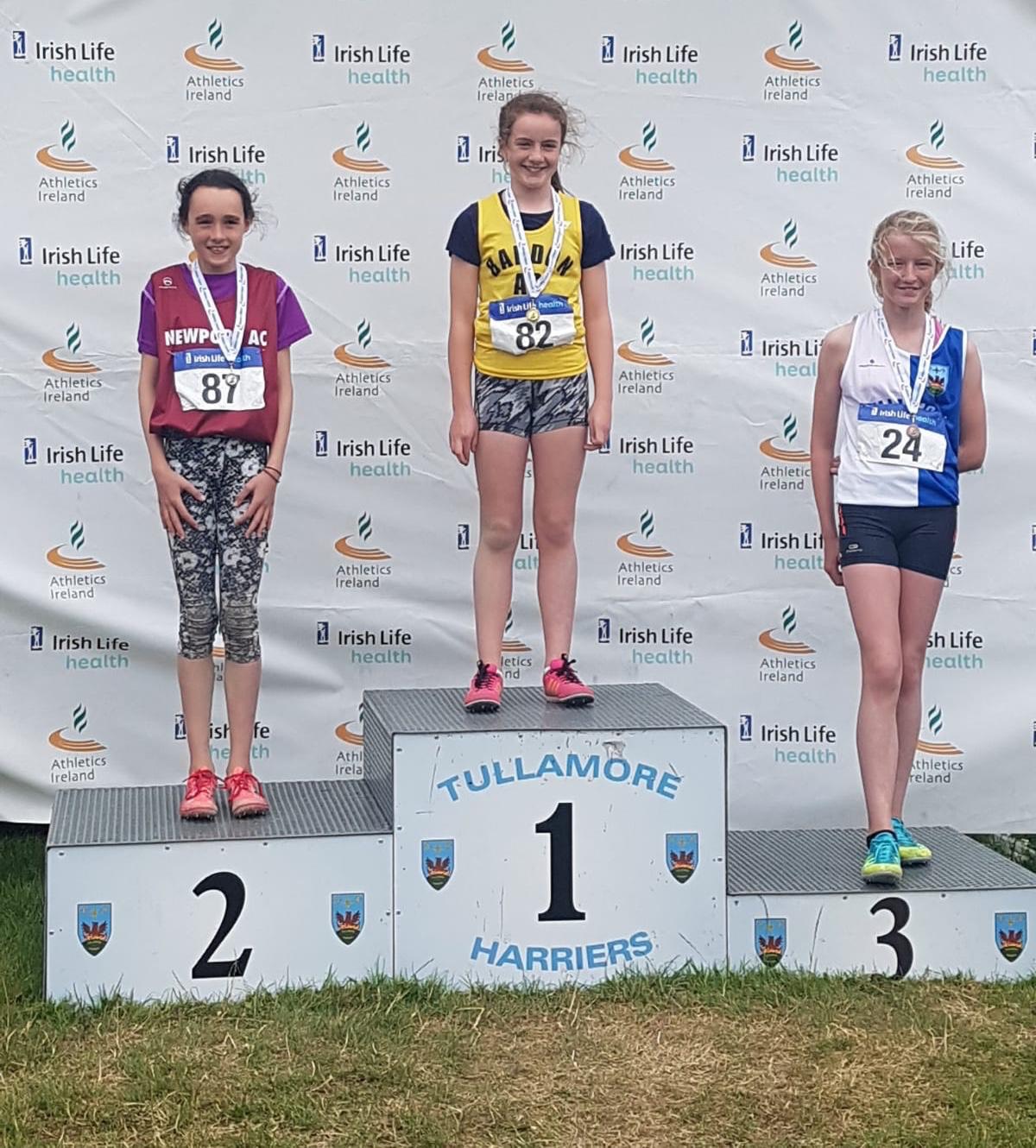 Katie Derevill on the podium after winning bronze medal in the Girls U13 Long Jump at the National Juvenile B Championships.

Eimear Cotter squeezed through to the final taking the fastest qualifying spot from the hardest heat and repeated her lightning speed in the final finishing 5th with a pb of 11:53 sec. Katie Deverell, in the U13 Girls, had a super day at the jumps. In the High Jump she finished 6th with a pb jump of 130cm and narrowly missed 133cm which would have put her joint third. Not fazed by the result, Katie had a little break until her Long Jump and the tired legs were evident in her early jumps but as the competition progressed she nailed the last jump with 401cm to take the bronze medal. A remarkable achievement for this young lady in her first season in athletics. In the U16 boys 100m, Evan Cunningham and Philip Dunne lined up for a straight final and Philip took bronze, just pipped for second and Evan took sixth. Well done to all athletes on their great performances. 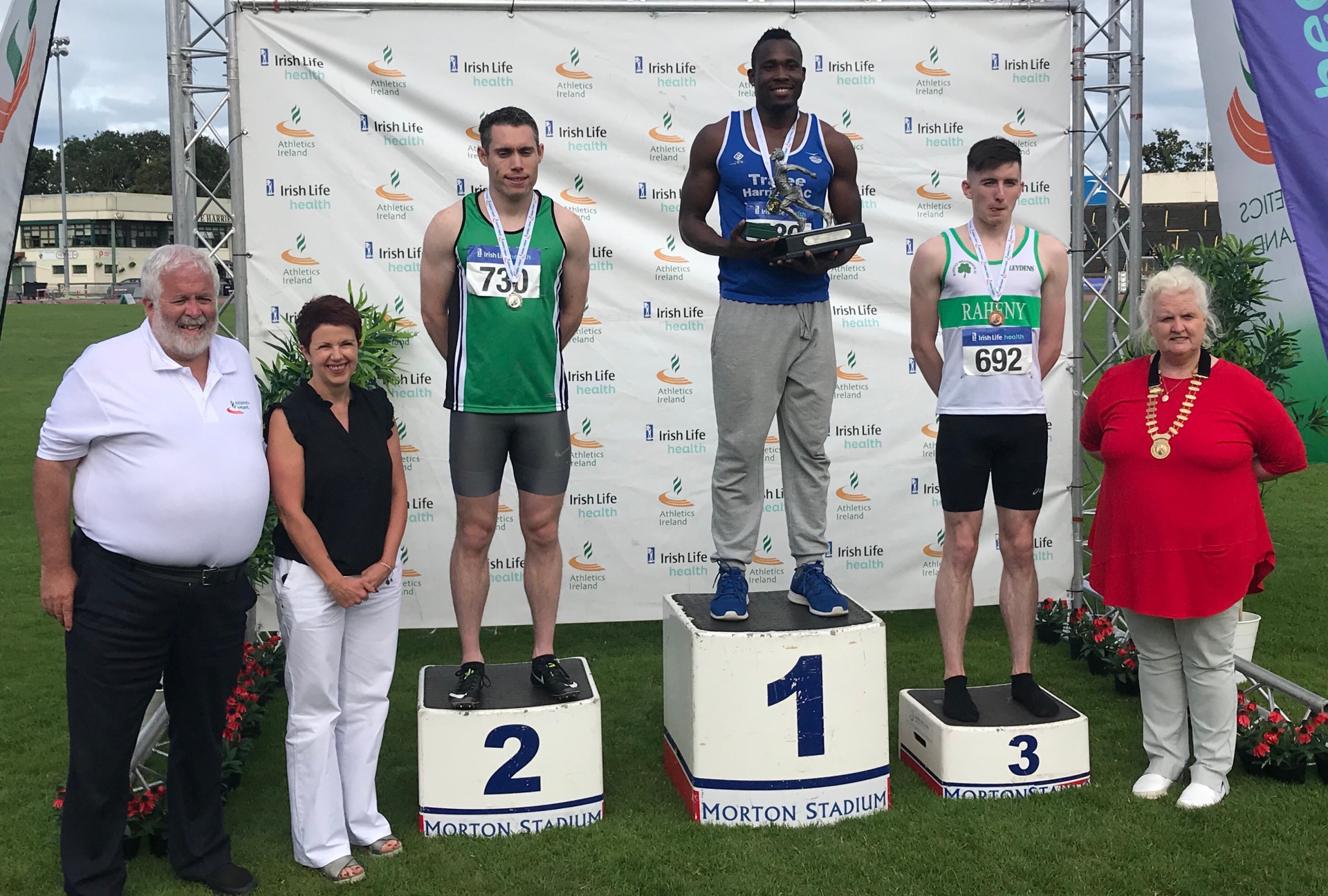 The 7th annual event will take place on Saturday 31st August 2019. The Leinster and Offaly Half Marathon Championships will be incorporated into this year's race. This year we have the brand new Ladies Team Trophy, the Phyllis Delaney Cup. The Men's Team trophy is also up for grabs. Every year we get huge positive feedback from participants and spectators alike who praise the friendly atmosphere and quality of the Tullamore Half Marathon. The event is now sold out having being capped at 1,000. See you all on 31st August.

The club offers its condolences to the families of: Tony Walsh, Killeigh, who was a club stalwart for years and featured prominently in the club book, and also worked for decades in the social centre; and Bridget Cunningham, Clara, grandmother of club member Elysia McCormack; who passes away recently. May they rest in peace.

Training for adults every Tuesday and Thursday at 6.30pm and Sunday at 8.00am except on race days.  New members always welcome. Please contact Leslie Buckley 087-6130971 or Anna Hyland Guilfoyle 086-8248928 or any club member. Full details regarding Juvenile training on tullamore.com.

Please note that membership for 2019 is now overdue. Forms are available in the clubhouse or from Tullamore website, http://tullamore.com/join

Please note that use of the club’s facilities, including the tarmac track, is restricted to members of the club.