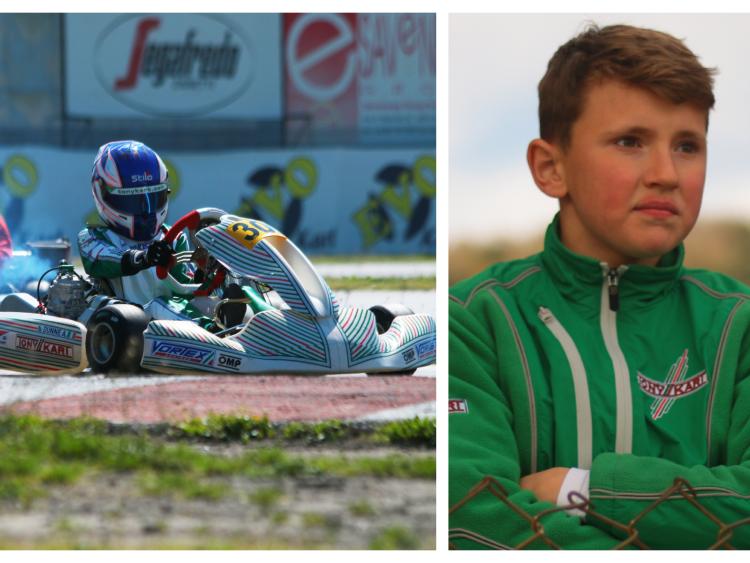 Offaly-based teenager Alex Dunne made an impressive start to the 2019 European Karting Championship at the Sarno circuit in southern Italy last weekend as he took three wins from his four heats, fastest race lap and second in the pre-final.

Unfortunately for the young Irish racer, he was taken out in the final, bringing a premature end to his very positive weekend.

Friday's qualifying saw Alex right on the pace as he continued to get used to his new Tony Kart team. On only his second event with the Italian outfit, he finished fastest in Group 1 with second quickest time overall, to put him on the front row of the grid for all of his heats.

Friday's first race saw the Clonbullogue resident start from pole and he was never headed as won by almost a second. For race two Alex sat second on the grid, behind the fastest driver from qualifying. Away from the lights the Irish driver was comfortable in second place and stayed there until lap three when he moved past to take a lead he would hold onto until the chequered flag.

Heat three saw Alex again leading from lights to flag, this time building up a huge winning margin by Karting standards of 2.5 seconds. Alex also initially led the fourth heat but on lap four he was overtaken for the first time all weekend and dropped to third. The Tony Kart driver was soon back to second and fighting for the top spot but a small mistake on lap eight, while right on the tail of the leader, saw him run off the track and drop to twentieth at the flag.

Dunne's heat four finish meant a third row start for the pre-final. Once the lights changed to green the teenager again showed his ability as he battled back to second by the flag to line up fourth for the final.

The final started well, with Alex running strongly at the tail of the lead group. As the leaders battled, the field began to close and Alex was caught by the leader of the chasing pack, who on closing the gap, immediately attempted a difficult overtaking manoeuvre, knocking the Irish driver out of the final.

Despite failing to finish the final, Alex Dunne left the European Championship opener with his best ever position in the standings, as his points from the heats and pre-final were enough to leave him seventh overall.

Next up for the youngster is the CIK European Championship opening round at Angerville, France, on April 18 - 21.