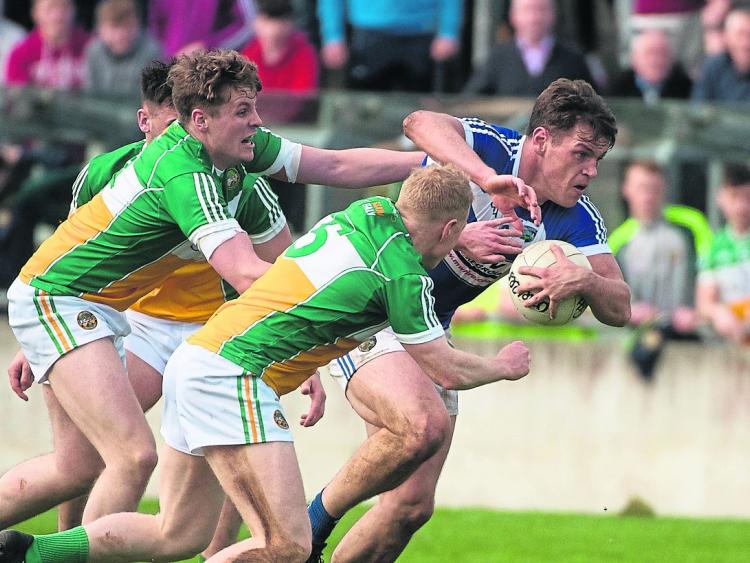 John O'Loughlin lined out at midfield for Laois.

Two second half goals for Laois from Evan O'Carroll and Paul Cahillane secured victory for the visitors in O'Connor Park today leaving Offaly on the brink of relegation from Division 3.

Offaly had the wind in the first-half but it was Laois who opened the scoring through Evan O'Carroll. Kieran Lillis doubled the lead soon after.

UPDATE: Offaly avoided relegation for today at least thanks to a late point from Down..... Click here for more

Offaly weren't making the most having the wind at their backs, but they finally opened their account in the ninth minute when Anton Sullivan pointed from 30 yards out. Laois responded with interest, as Donie Kingston defied the wind to curl over a wonderful point, and then Ross Munnelly fisted over from close range to put them into a 0-4 to 0-1 lead.

Offaly had offered little, but they slowly but surely worked their way into the game, starting with a point from Cathal Mangan. Bernard Allen then curled over a wonderful free from close to the right sideline to narrow the gap to one, before an unmarked Peter Cunningham leveled the scores with a simple score from 25 yards.

With momentum behind them, Offaly pushed ahead for the first time thanks to another free from Allen, but Eoin Lowry replied for Laois to keep the sides level, 0-5 each after 24 minutes.

Offaly were being a bit more direct now though, and they were getting their reward for it as they went back in front thanks a point from a long-range free by goalkeeper Paddy Dunican. Bernard Allen then added his third, and first from play, before a Niall Darby score saw the Faithful men lead 0-8 to 0-5 at half time.

Playing against the wind in the second-half Offaly managed to extend their lead. Ross Munnelly got the first score of the half but Ruairí McNamee hit back with two points to stretch the lead to four.

Laois hit three in a row and then scored the first of their all important goals. It came from simple, Route 1 football, as Donie Kingston played a perfectly weighted ball over the top for Evan O'Carroll. He plucked it from the sky, brushed off Eoin Rigney and then calmly slotted to the net for a superb goal.

Ruairi McNamee hit back for Offaly with another good point, but Laois were enjoying their best spell since the opening minutes, and soon pounced for another goal. Conor Boyle cut in from the right wing and passed to Paul Cahillane in the penalty area, seconds after he had been introduced, and he spun away from his marker before drilling the ball to the net.

To Offaly's credit, they never threw in the towel as they mounted a late charge. Bernard Allen was at the heart of it, as he kicked three of the next four points, with Niall McNamee adding another, to see the deficit whittled down to just two points with five minutes to go.

However that was as close as they got as Paul Cahillane kicked what turned out to be the final point of the game.

With Longford winning against Sligo, Offaly now need Carlow to lose their game to Down to have any chance of avoiding relegation to Division 4.