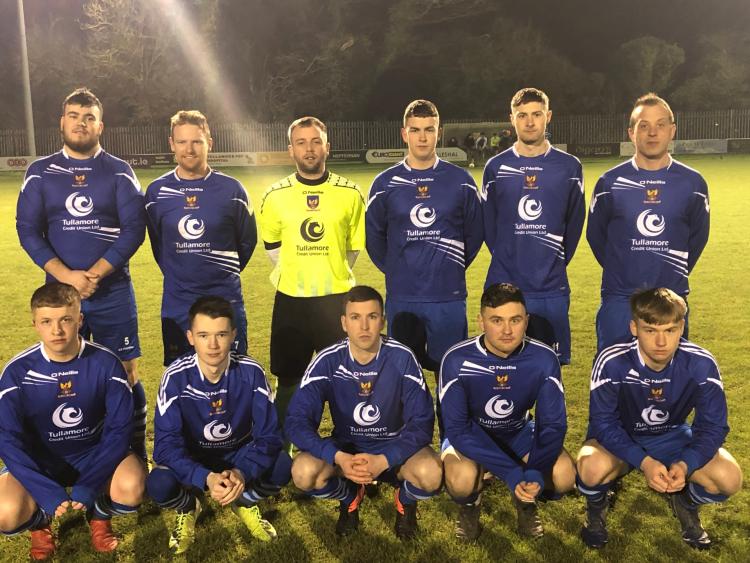 Tullamore booked their place in the third round of the Combined Counties Cup with a narrow victory over a very good St Aengus side in Leah Victoria Park last Saturday, February 2.

Despite the home side dominating for long periods, the visitors will have been disappointed not to have at least brought this game to extra time.

Tullamore were quickly out of the blocks and after just five minutes they nearly jumped into the lead when Ben Kilroe’s dangerous cross broke back to Steven Dwane and his dipping drive came crashing back off the crossbar.

They again went close when Stephen Francis picked out Niall Kearns but his effort was deflected wide and then Derek Coolahan’s searching cross was hacked clear by Gearoid Gaughan in the St Aengus goal.

As they continued to press Kearns just failed to get on the end of Ben Kilroe’s through ball and then a fine run by Niall Gorman saw him pick out Glen McEvoy but he was crowded out.

It was all Tullamore at this stage as David Maloney threaded the ball through to Niall Kearns but Gaughan was quickly off his line to clear and he again came to his side's rescue when he kept out Stephen Francis’ effort down low to his left.

With 22 minutes gone the pressure finally paid off when Niall Kearns got on the end of a Casey Evans cross and hammered the ball home off the crossbar for a fine goal. Evans again created danger when he found Coolahan 25 yards out and he sent a blistering drive inches outside the left post.

With 35 minutes on the clock, the visitors came alive as Wayne Sydes broke through the middle but he was denied by a great full length save from Dean Molloy in the home goal and minutes later Evan Cuddy beat the offside trap but Molloy was quickly off his line to avert the danger.

With Tullamore on the back foot, they again went close when Brian Bowe curled his free kick just outside the right post as the interval arrived with the home side one goal to the good.

On the resumption, St Aengus picked up where they had left off as Conor Phelan played in Mick O’Brien but he was denied by a fine relieving tackle from Niall Gorman while, at the other end, Shane Minnock picked out Derek Coolahan on the right but his cross was well taken by Gearoid Gaughan.

With 55 minutes gone Tullamore nearly added to their advantage when Scott Martin’s deep cross found David Maloney at the far post but his effort was taken off the line by Wayne Sydes. The home side were almost caught napping when Damien Lenihan’s clever free-kick found Sydes in the area but he failed to hit the target and then David Maloney played a great ball through to Niall Kearns but he fired wide under pressure.

Tullamore again went close when Derek Coolahan’s free-kick was gathered by Gaughan at the second attempt while, at the other end, Wayne Sydes played a lovely ball through to Tadhg Burke but Niall Gorman got across to tidy up.

As the home side began to wrestle back control of the game Glen McEvoy sent a fine 35-yard effort narrowly over and then Stephen Francis and Niall Kearns combined to create an opening for McEvoy, but his effort was charged down by Tom Hill.

With 65 minutes gone Niall Gorman played the ball through to David Kluz but he was denied by a great point-blank save from Gearoid Gaughan as the visitors refused to throw in the towel. They nearly got themselves back in the game when Evan Cuddy latched on to a weak clearance and brought a fine save from Dean Molloy down to his left.

Tullamore hit back with Derek Coolahan driving the ball across the face of the goal to Darren Boland but his cut back was
scrambled clear. Boland again went close when he got on the end of a Niall Kearns cross but he just failed to get enough purchase on his shot and Gaughan saved comfortably.

It was far from all one-way traffic as Tadhg Burke cut through the middle but he was stopped in his tracks by a fine Darragh Connolly tackle. With minutes remaining the home side nearly wrapped things up when Scott Martin picked out Steven Dwane but his cross just missed out the inrushing Derek Coolahan as the referee brought the curtain down on a very entertaining cup tie.

Following the game manager, Brendan Bracken was particularly pleased with the part played by the under-19 players he brought into the squad. In what was a fine team performance there were excellent contributions from Niall Gorman, Ben Kilroe, Casey Evans and David Kluz, but the man of the match award went to outstanding Tullamore playmaker, Stephen Francis.

Tullamore are at home to Drumcondra/Stella Maris in the Leinster Senior League this Friday, February 8, in Leah Victoria Park, kick-off 8.00 pm.