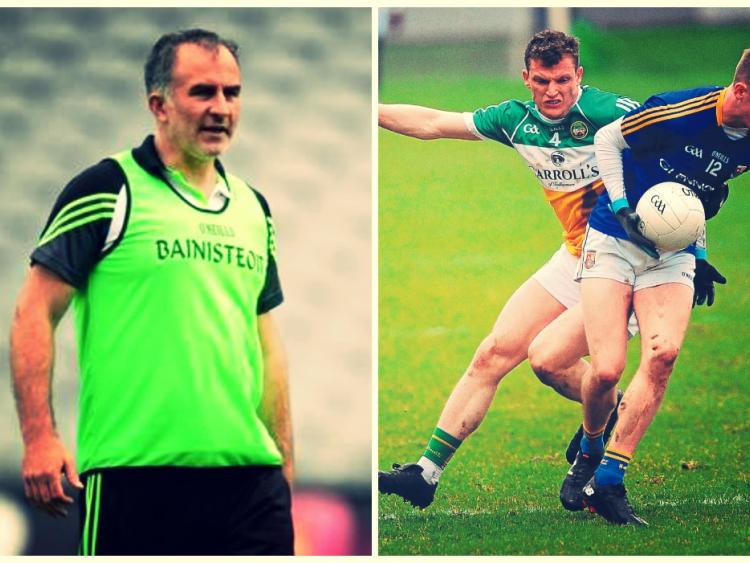 INTERVIEW: Wallace speaks to Offaly Express ahead of Wicklow clash

Offaly football manager Stephen Wallace has said his players are well prepared for Sunday's Leinster Championship opener against Wicklow despite things "going against" them since the conclusion of the league.

"I suppose it's a combination of things like lads being back at their clubs and picking up injuries," he said. "We'd have serious injury doubts at the moment over Sean Pender, Michael Brazil and Jack Egan, while Peter Cunningham looks extremely unlikely to play," the manager revealed. Joey O'Connor is also a long-term absentee after breaking his hand playing hurling for his club, St. Rynagh's.

"It is what it is, and if we've lost them for the game itself, there's an opportunity for other lads to put their hands up," Wallace commented to the Offaly Express.

Speaking about the time between the league and this weekend, the Kerry man said, "we had just started to get a bit of momentum going at the end of the league, we'd gone three games unbeaten, we were starting to play good football, so the break in April probably didn't help. We'd have loved to have gone straight into championship at that stage."

SEE ALSO: 'Nothing else matters' - Offaly captain not looking past Wicklow

Further to that point, Wallace criticised the GAA's club-only rule for April. "I think the rule was a knee-jerk reaction from the powers that be but if lads are away with their clubs in April and they're scheduling the Leinster championship for May 13, when are you supposed to prepare a county team?" he pondered. "I think these guys need to take a serious look at themselves. It just doesn't make sense," he blasted.

Looking toward Offaly's opener against Wicklow this Sunday at O'Moore Park, Wallace said, "we are excited and looking forward to the game on Sunday." He scoffed at the notion of Offaly having an easy time of things against the Division 4 outfit who are managed by his old friend, John Evans.

"Anyone can take Wicklow for granted, but if they do, they'll get a rude awakening," he insisted. "They're backboned by the Rathnew lads who as we know turned Vincent's over, and I'm sure John Evans will come with a few tricks up his sleeve."

Wallace recognises the talent that exists within the Wicklow panel, suggesting Sean Furlong is "probably as good as what's in the country," going on to namecheck the likes of John McGrath and Dean Healy as big players for the Garden County.

When questioned on the bookies making Offaly the 1/4 favourites for the contest, Wallace said he was paying little notice. "You have to ignore it, anything can happen in 70 minutes and championship is a one-off game. The league is over, there's no form to go on, it's all about how teams have prepared over the last three or four weeks and looking at one team being favourites over another, you can come a cropper very quickly."

Stephen told us that Offaly will go out to play football "the proper way" against Wicklow after bedding in a distinct style over the last few months. "We've engrained into the lads that there's only one way to play and that's to go out and play football. We've no interest in defensive systems or putting men behind the ball, that's just not in our psyche," he continued.

Despite Wicklow boss John Evans said this week that the winner of this Sunday's tussle will be like a fly to under Dublin's "sledge hammer" in the resultant quarter-final, the Offaly manager isn't giving the possibility of a clash with Dublin a second thought. "We have to get over Wicklow first. We're thinking of one game and one game only, and that's Wicklow. There's one carrot in front of our lads and that's beating Wicklow. We look no further."

The former Kerry junior boss went on to say that the Offaly squad have been focused in their preparations despite "obstacles" like injuries being put in their way. "They're a great bunch of lads that have huge pride in their county and pulling on that Offaly jersey, there's no doubt. In terms of perseverance, work-rate, desire, and the want to be there, they're an 11 out of 10 bunch of lads," Stephen commented.

When asked about his own situation in terms of a ban imposed by Kerry CCC recently arising from an altercation at a Kerry club game, Wallace declined to comment on whether he would be on the sideline for Sunday's game, only moving to say, "that will have to play itself out."

However, unless a last ditch appeal against the potential eight-week ban bears fruit late this week, it appears the Offaly manager will be watching from the stands, but that prospect is not one that fazes the Ardfert man.

"The way the game has gone, we've guys mic'd up at high vantage points around the stadium in any event. You can't really influence or see a game properly from the sideline anyway."

"Watching the match from up high, you can see an awful lot more nowadays. Look, whether I'm on the sideline or not, it's not going to influence the outcome of the game," Wallace concluded.

Offaly's clash with Wicklow takes place at 4pm on Sunday afternoon at O'Moore Park in Portlaoise. The winners will earn the right to take on All-Ireland champions Dublin in the Leinster quarter-final with that game slated for O'Connor Park should Offaly preval this weekend.