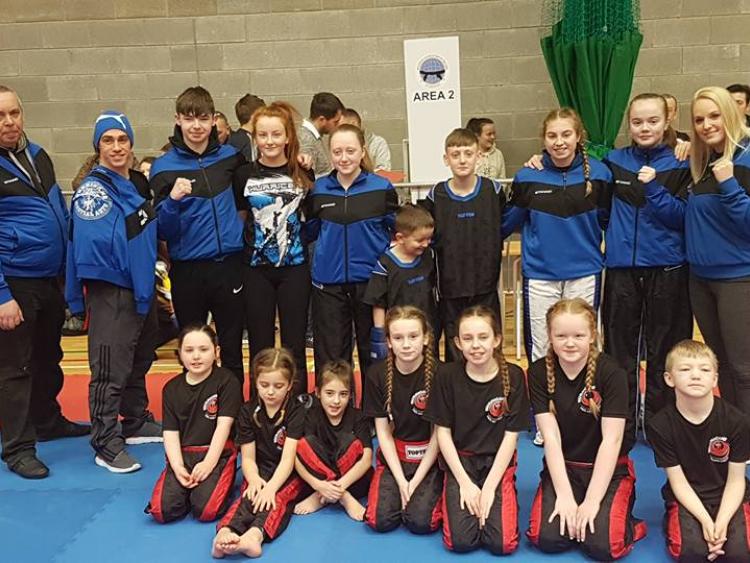 It is still early in the Kickboxing season but Edenderry’s Team Hurricane were back firing on all cylinders last weekend. The club had athletes competing on Friday, Saturday and Sunday in venues as far apart as Cork and Sligo. A haul of 12 Gold, 11 silver and 8 bronze made it a very successful weekend.

The venue for this one was the Rochestown Park Hotel and representing the club was Arron Daniels. Arron was the club’s first WAKO World Champion in semi-contact but is now a first class fitness coach and personal trainer at Velocity Academy in Edenderry. Arron with world renowned SBG coach John Kavanagh in his corner fought Emil Piatek over 3 x 3 minute rounds, however the decision did not go his way and all 3 judges scored the fight 29 - 28 to Emil.

Even in defeat Arron was very positive and complimented his opponent and has vowed to come back stronger and is already looking forward to his next fight. Arron also thanked his huge travelling support for making the long trip.

Saturday was a long drive from Cork to the Mugendo Open in Sligo IT and Arron Daniels made the trip with a trio of fighters for light contact, Dean Kane, Viktor Cirlan and Dawid Potzczka. Jay Daniels the club sensei and Nathan Tait also travelled for the semi-contact competition. What a productive day it was with Viktor taking two titles, Dawid two silver and Dean with a silver and bronze medal. It didn&#39;t finish there with Jay stepping onto the mats in the light contact and winning the senior -70Kg title. The semi contact results were just as impressive with Jay making it a double in the -70 Kg section and then adding the Grand Champion openweight title. Nathan Tait won his first senior -60 Kg title at the ripe old age of 15.

This was a huge day for the newest addition to the club, the Gymnastrix team. The team only started training last September and this was their first foray into the competitive Musical Forms section on the national stage. I’m sure at least a few of the parents had doubts on the long trip as the snow pelted down the further west you travelled but everyone made it, along with the kickboxing team to register before 9.

To add to the nerves on the morning the Musical Forms was run off earlier and so had the full attention of the crowd but these kids showed nerves of steel as they performed in front of the packed house. Coaches Nathan Tait and Claire Brennan were ecstatic when Stella Walsh won first place, Eve Doran and Cara Farrell taking silver medals with Hailey O’Neill, Scott Moore, Abi Nugent and Leah O’Toole taking bronze. The long day had just started for the fighting team and it was a hugely productive day.

Nathan Tait was the star of the show again, adding the junior -60Kg and -70 Kg junior titles to the senior won the previous day plus silver in the light contact and Kick Light divisions. Tyler Fetherston and Ross Keyes secured silver medals in their sections an improvement on bronze in the New Years Open a couple of weeks ago.

Alex Keyes also won a bronze medal in his section, a good start to his year. Last up for the club late in the evening was Alex Gillen and he lost out after sudden death in the last eight. That leaves the girls and what a show of force they put on, Leah Grant won her section and finished as runner up in the higher age category losing out to current World and European Champion, Karina Nikitina. Orla McCann won her section beating current European Champion Niamh Ryan in the final and secured bronze in a second section. Aoife Reilly really was on top form and secured one title beating colleague Kate O’Mahony in the final.

Kate returned to the mats for the first time in two years but showed no rustiness on her return. Aoife also secured bronze in another section but her movement and timing were brilliant through the day. Big thanks as always to Claire and Jay for all their coaching and to Darren Tait for refereeing over both days.