The town's thunderous start brought to a halt 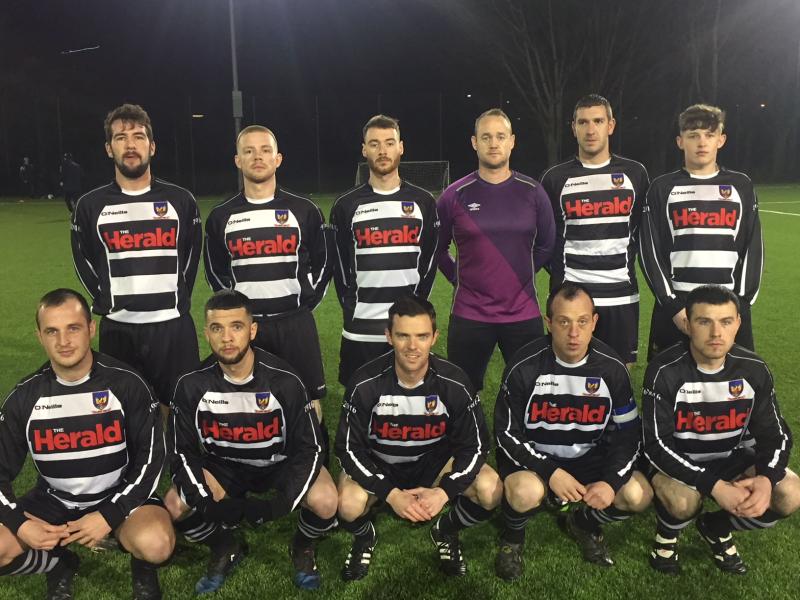 A devastating five minute spell in the second half during which they conceded three goals brought high flying Tullamore Town crashing back to earth in this top of the table clash against old rivals Liffey Wanderers last Friday.

Up until that point in the match they had been enjoying the better of the exchanges as they went in search of an equaliser after the home side had taken the lead after 14 minutes.

Liffey traditionally play a long ball game using their twin strike force of Aidan and Lee Roche to maximum effect and once again they were the difference between the two teams as they accounted for three of the goals scored on the night.

Tullamore began brightly with James Mooney tipping Brian Francis’ 20 yard effort over and Francis was again in the thick of the action when he chased down a through ball from Enda Carroll and skipped around his marker but, as Mooney advanced
from goal, his shot trickled agonisingly outside the post.

Against the run of play the home side jumped into the lead when, following a corner, Lee Roche controlled the ball at the
near post and smashed it into the roof of the net.

Tullamore dusted themselves down and went back on the attack with Mooney doing well to keep out Brian Gill’s free kick on 20
minutes and he again went close when Brian Francis played a lovely ball through to him, but the Liffey keeper turned his effort around the post.

On the stroke of half time they nearly equalised when Stephen Francis let fly from 20 yards but once again Mooney came
to his sides rescue as the referee brought the curtain down on a battling first half with the home side holding on to their one goal advantage.

On the restart Tullamore picked up where they had left off with Brian Gill heading narrowly wide from a Kevin Williamson corner and then Brian Francis played a great ball through to Macdarragh O’Neill, but he delayed his shot and it was charged down.

With 63 minutes on the clock the game turned decisively in Liffey’s favour when Aidan Roche got on the end of a long ball out of defence and raced through to give Alan O’Connell no chance and minutes later Conor Riddick picked out Lee Roche in the area and he made no mistake from close range.

With Tullamore still reeling they struck again when the visitors failed to clear their lines and Gary Young pounced on the loose ball to bundle it into the net and end the game as a contest.

With both managers emptying their benches the remaining minutes failed to produce any clear cut chances as Liffey ran out comfortable winners to claim top spot on goal difference in the league table.

This was only the second time this season that Tullamore have failed to find the net and there is little doubt that they will recover from this setback. It is however a timely warning that there is still a long way to go in what is a very competitive league.

They will be hoping to get back on the winning trail this Friday when they take on St Mochtas in the Charlie Cahill Cup, kick-off 8.00 pm in Leah Victoria Park.

Tullamore are at home to St Mochtas in the Charlie Cahill Cup this Friday, 1 st December, kick-off 8.00 pm in Leah Victoria Park.

Tullamore Town are having their Christmas Dinner Dance in the Bridge House this Saturday, December 2, at 7.30 pm. Tickets are €25 each and are available from Dermot Heffernan at 085 8480700.