OPINION: Austin Gleeson should have been banned for All-Ireland final 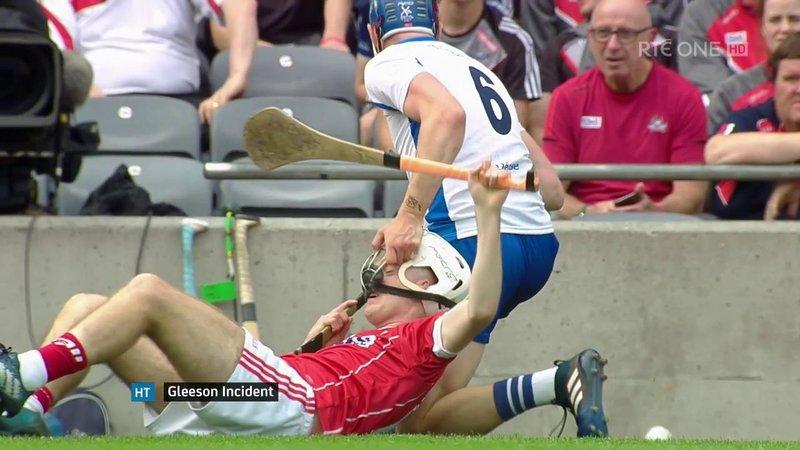 OPINION: Austin Gleeson should have been banned for All-Ireland final

News breaking yesterday suggests Austin Gleeson has been cleared to play in the Senior Hurling All-Ireland final against Galway, despite interfering with the helmet of an opponent in the semi-final against Cork.

Last year's hurler of the year clearly removed Luke Meade's helmet as the pair were bundled over the sideline during that semi-final.

On Tuesday, it became clear that referee James Owens had stated he was happy with the way he officiated the game, effectively shutting down the disciplinary case against Gleeson. The referee had been asked the question by the GAA's CCCC.

The rule in this area specifically states that it will be a red card offence to behave, "in any way which is dangerous to an opponent, including deliberately pulling on or taking hold of a faceguard or any part of an opponent’s helmet."

The minimum penalty for the offence is a one-match suspension, an outcome that would have seen Gleeson banned for the All-Ireland final with Galway.

Eddie Brennan was basically attacked for his views on the Sunday Game, where he basically said that Gleeson deliberately tampered with the helmet and the situation was fairly clear-cut.

It should have been clear-cut. Eddie Brennan was right. The rules are laid out simply and regardless of whether their was violence or malice in the move, the fact is that Gleeson knowingly and deliberately removed Meade's helmet. The video evidence of that is overwhelming and not even the most staunch Deise supporter could deny it.

Brennan clarified his remarks today by recalling the case of Declan Fanning, a Tipperary player who had his helmet pulled off by a Wexford opponent during a game in 2010. That incident happened during a more ill-tempered exchange, but that act effectively ripped Fanning's ear in half.

He has the scars to this day to prove it and received 25 stitches that day to repair the damage. Now, to the casual viewer, what Austin Gleeson did was not done with aggression, but the rules are the rules, and they are there for a reason. The act of removing someone's helmet endangers them - end of story.

The referee bottled here. The video evidence couldn't be clearer, and I don't care how good Austin Gleeson is and how much of a shame it would be for him to miss the final - he should be gone. Simple as.

If we are condoning this behaviour at the highest level and challenging every disciplinary decision, what example is being set for underage players. This now shows them that they can get away with pulling an opponent's helmet off after a tackle, and that is a dangerous precedent to set.

Disregarding the referee saying he was happy with how he handled the Cork/Waterford game, it is now clear that these decisions should be taken out of the referees' hands. A central disciplinary body should take over.

Take a situation like this where public discourse is boiling over with most people advocating Austin Gleeson's clearance to play, while the video evidence is crystal clear to the contrary. The pressure on a referee to then make the popular announcement and let him play, is palpable.

In the cold light of day, given the facts, the evidence and the freedom to act without emotion, a fair minded person would say Gleeson deserves to be retrospectively banned for his mindless act. The intent, or lack thereof, is irrelevant. It's interference and that's that.

The fact that he will play in the All-Ireland final is a disgrace, and makes a complete mockery of the rules of the game.