OPINION: Pat Spillane was right to call out Diarmuid Connolly 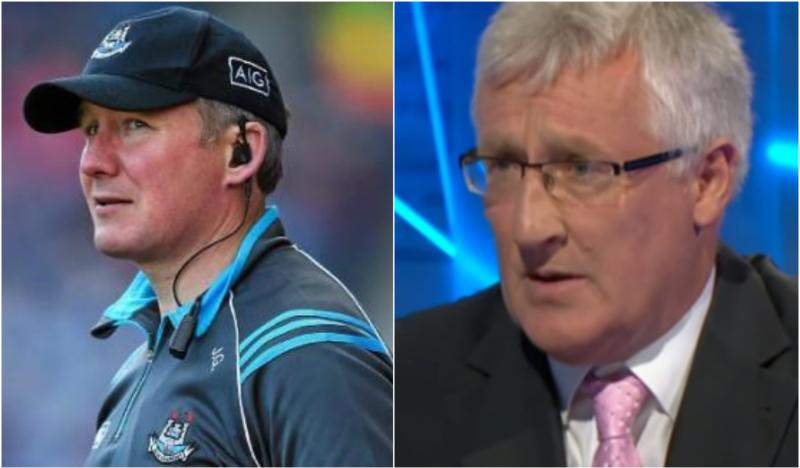 Jim Gavin may have thrown the toys out of the pram on Sunday following Dublin's dismantling of Westmeath, but his directed anger at Pat Spillane was childish, petty and misguided.

Sadly for Jim Gavin, that is Pat Spillane's job. Television cameras were at the game between Dublin and Carlow and caught Diarmuid Connolly breaking Rule 5, minor interference with an official. Personally, if Pat Spillane and the Sunday Game lads didn't talk about it on the night, I would have been outraged, as would most of the country.

It wasn't an alleged offence that was perhaps unseen by the cameras - it was a clear encroachment on the linesman's personal space. There was no hiding from it and Pat Spillane was entitled to discuss it and restate the rules surrounding the issue. It couldn't have been any more clear-cut.

Fast-forward through an absolute fiasco where Diarmuid Connolly wasn't appealing to the CHC, then he was because he'd been overruled by Dublin officials. In the end, it was Dublin that effectively turned and shone the spotlight on themselves. They lost control of the situation, despite Diarmuid Connolly seemingly deciding to accept the minimum ban of 12 weeks for his offence, which was upheld.

It reeked of sour grapes from Jim Gavin as he then turned on the media and refused one-on-one interviews on Sunday. He took issue with Spillane's so-called "prepared statement" about the issue on the Sunday Game programme following the Carlow match.

"What concerns me is how his [Diarmuid Connolly] good name was attacked. Before we even saw the referee's report," he said. "We saw the rulebook being read out against him on Sky Sports. We had the national broadcaster in their post-match review - both Pat Spillane and Colm O'Rourke, but particularly Pat - read out a pre-determined statement, which was disappointing."

"Supporters have come to me and asked me what's going on, and why is this imbalance happening," he continued.

This goes back to the whole mindset whereby Dublin think the rest of the country is out to get them. The 31 vs. 1 sentiment has been spouted on fan forums and comment threads for the weeks following the Carlow game. They reckon this wouldn't be a talking point if it happened in a game involving two lower ranked teams and a relatively unknown player.

Dublin have to accept that they are the most high-profile team in the country, and of course, sharper focus centres on their players and their actions. Similarly if it was Aidan O'Shea or Sean Cavanagh, it would garner a lot of attention. The media focuses on the high-profile teams and players because they are the parties the public are most interested in. It's common sense really.

It is not an attack on Dublin or Diarmuid Connolly, and if there was an attack on his "good name," perhaps it took place among social media commentators and individuals, out of the control of the recognised media. Connolly divides opinion massively, and if one thing is worth protecting, it is people's right, both people like Pat Spillane and the general public, to give those opinions.

In this instance, despite what Joe Brolly or Jim Gavin might say, Pat Spillane has no case to answer. To suggest that the CCCC would be influenced by the Sunday Game programme and the opinions espoused on it, is not only ridiculous, but also casts aspersions on those operating it.

Now, if you're going down the avenue of claiming this is an attack on Connolly's good name then you will be met with the retort of fair comment. Any one with even the vaguest interest in Gaelic football knows that Diarmuid Connolly has a checkered past when it comes to indiscipline on the pitch. It's not a secret and Spillane wasn't providing the country with a great revelation with that remark.

Jim Gavin's handling of the media yesterday was nothing short of petulance, and it was embarrassing. I actually cringed for the man as he sat on his perch in a staged press conference and delivered his monologue. The very charge levelled at Dublin again and again is that they have a sense of being above everyone else, including the law, and beyond answering questions from the media.

Yesterday, they displayed that attitude in spades - a smugness that sets public opinion on their backs, and rightly so.