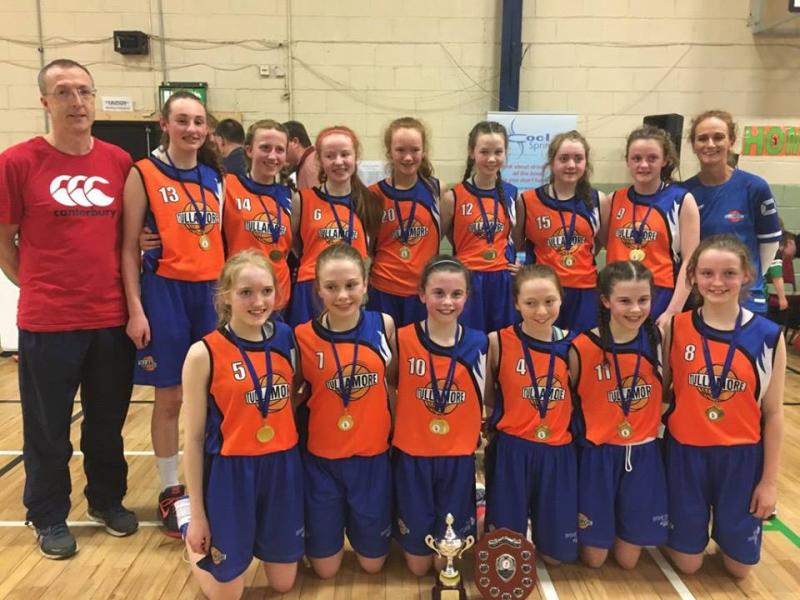 The Midlands Basketball season came to its end in a welter of excitement with the Cup Finals last weekend. It was Tullamore Basketball Club's most successful Top 4 tournament in its eight year history with 8 different teams reaching semi finals and of those four went on to the Cup Finals. Our U14 A side became the first girls side from our club to claim a cup title and it was one richly deserved. They denied Portlaoise a four in a row at this grade in the process. Our three younger girls teams also acquitted themselves admirably in their finals although results didn’t go their way on this occasion.

On Saturday the Under 14 girls finals took place. The occasion and excitement of the pre-game introductions added greatly to the excitement but it may also have added to the nerves for our Under 14 B side as they started poorly and gave themselves a mountain to climb against a fine Portlaoise side. The team had the consolation of receiving the league winners shield at the end of the match, in what was a good season generally for the girls.

The Under 14 A girls took to the court next against a physically powerful Portlaoise side coming off the back of a third place finish in the B All-Ireland last weekend. The game was tight into the final minute where Tullamore got the last few scores to secure the title 52-47. Tullamore team: Aoife Farrell, Mia O Mahoney, Lucy Fennelly, Kate Healy,  Emma Glavin (Captain), Ellie Glavin, Eimear Galvin, Shauna Slattery, Maedhbh O Brien, Keisha O Brien, Saraid McDonald, Emma Hand  and Sarah Jane Lynam.

On Sunday it was the turn of the U12 A girls. The game was tight up to half time where Athlone held an 11-6 lead. That lead proved difficult to bridge despite a spirited comeback form the Tullamore girls that had left just two baskets in it at the end of the third quarter, 11-15. Athlone were stronger in the final quarter and were deserving winners. Tullamore picked up runners-up medals for both the league and cup.

Our Under 12 B girls did likewise at the end of their game against Kestrels. This was Kestrels first team so the age and physique difference was just too much for our younger girls to match. At the presentations, young Fodhla Nyhan was presented with the Golden Ball Award for her performances throughout the season for which we are very proud of her.

It’s the turn of the Seniors the weekend after next as the Top 4 is held in St Mary's, Portlaoise. Our Senior Women play on Friday night, April 28 at 7:15pm against Portlaoise while the Senior Men play in the B Top 4 at 4pm on Saturday, April 29 against Old Leighlin of Carlow.