Tullamore Gaol to be illuminated with animations depicting its fascinating history 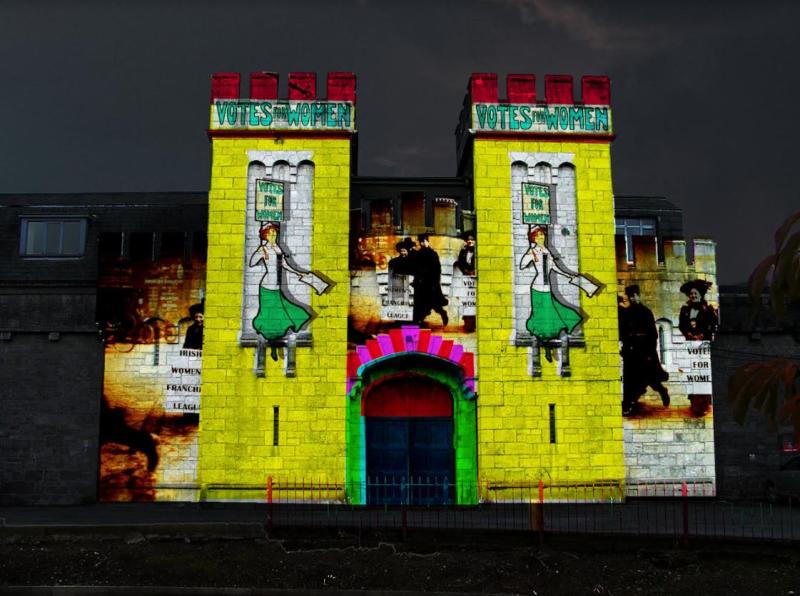 Tullamore Gaol to be illuminated with animations depicting its fascinating history

SPONSORED BY IN THE OPEN OFFALY

Spectacular Vernacular - In the Open | Faoin Spéir Offaly launches its 2022 programme with ‘Behind These Walls’ – a new work by Caroline Conway.

On Friday, February 18 and Saturday, February 19 between 7:30 -10 pm, the façade of Tullamore Gaol at Kilcruttin Business Park will be drenched in spectacular light and colour as Birr visual artist Caroline Conway projects her fascinating animation depicting the history of the mysterious building.

The work entitled Behind These Walls is steeped in known and unearthed stories surrounding the building, from the individuals who were incarcerated there up to its industrial usage. This event is one of many events that will take place in the county between now and the end of April as part of Spectacular Vernacular- In the Open | Faoin Spéir.

Spectacular Vernacular- In the Open | Faoin Spéir – Offaly, funded by the Arts Council of Ireland, is a collaborative partnership led by Offaly County Council’s Arts Office with Birr Theatre and Arts Centre and Birr Festivals Collective.

The aim is to develop an exciting and innovative curated programme of outdoor events, to take place in Birr, Lough Boora, in conjunction with the Sculpture Park and Tullamore, in anticipation of the opening of the new Arts Centre for the town next year. In the Open | Faoin Spéir – Offaly generates a sustained and curated programme of multidisciplinary, inclusive arts activity in public or open spaces in towns and communities around Ireland until April 2022.

Caroline Conway is a renowned artist who has been providing significantly focused arts strands of collaborative, multi-disciplinary projects in non-traditional art spaces and the public realm for over 20 years in County Offaly. She feels that the Tullamore Gaol has had a very significant and broad tapestry of events happen within its changing roles over the years, with experiences by its inhabitants and workers that need to be shared.

"We walk past buildings that have a great history but give little thought to the human stories tied up in them. These stories connect us to our town and to our past. Tullamore Gaol housed Land Leaguers and Suffragettes and was where the last woman was hanged under British Rule. It was burned down and rose again as Salts and then Tullamore Yarns, the largest employer in town for over 30 years. This history will be brought to life through a mesmerizing audiovisual projection that animates the architecture of the imposing gateway."

Incidents of historical significance in her animated stories include the ‘Tullamore Tweed’ incident amidst a place of Hard Labour, with terrible overcrowded conditions:

"In 1887, when the Land League leaders William O’Brien, M.P. (Mallow) and tenant farmer John Mandeville were imprisoned at Tullamore Gaol, Mandeville and O’Brien declared themselves ‘political prisoners’ and refused to wear the official prison uniform. It is said that a suit of Blarney Tweed, a soft hat and an emerald green tie was somehow smuggled into the Gaol for O’Brien to wear in defiance of the authorities.

"Upon his release and his subsequent return to the House of Commons, O’Brien wore the same tweed suit to rankle Arthur Balfour during the chamber sittings."

In 1913, the Women Suffragette prisoners were moved from Mountjoy Prison to Tullamore Jail to attract less attention. The suffragettes also demanded to be acknowledged as Political Prisoners, which the authorities consistently denied.

"Oh, Tullamore Jail is a charming place
Bang the bolts and clatter the tins
This loyalty's school for the Irish race-
At 6 a.m. the trouble begins:
Rub and scrub and tramp away,
Pull and prick, and hammer all day.
Smash the stones and turn the clay
And mourn for your political sins"

These are just some of the fascinating stories that will light up the Gaol entrance on both nights at this free all ages event.

This event will officially launch the Spectacular Vernacular In the Open | Faoin Spéir – Offaly programme of which full details of all upcoming In The Open/Faoin Spéir workshops, projects and events will be available on Facebook Page ‘Spectacular Vernacular’,  or on www.intheopenoffaly.ie and www.offaly.ie/eng/Services/Arts-and-Culture/.

For more information on Caroline Conway and her amazing work, visit www.carolinefconway.com.