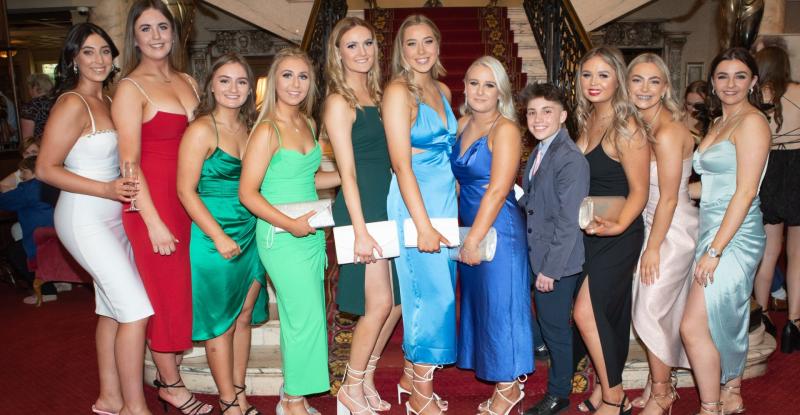 U-18 ladies at the Tullamore Rugby Club awards and ball

THE outstanding club members and players were honoured at a gala Tullamore Rugby Club ball in the Bridge House Hotel on Friday evening.

Members, guests and friends turned out in force for an enjoyable evening as the club reflected on a successful 2022 season.

There was a festive atmosphere at the function as club PRO and incoming president Ivor Scully were feted as the 2022 Club Persons of the Year.

Outgoing club president, Stephen Lynam described it as an “absolutely super year” for Tullamore Rugby Club in his address.

In his final function as president, Mr Lynam smiled: “I am going back thirty years ago since I have seen a crowd like this turn up for a Rugby Club event.

“I can only describe last year as being an absolutely fantastic year. As an old fogey and senior player who came up through the ranks since first playing at six years of age, I can see the wealth of talent that is out there now. Ye are a gifted group. Ye have coaches there that we never had when I was playing when we had only the one coach between ten teams. The pool of talent that is there at the moment is just phenomenal.”

Mr Lynam urged members to show their appreciation to the award winners. “These people who have been picked out this evening have absolutely shown dedication beyond anyone else on the whole team over the year. The pay off is now where their achievements on the pitch are being acknowledged.

Player of the year - Abaigeal Connon

Player of the year - Emma Kelly

Player of the year - Fionan Redmond

Player of the year - Odhran Hickey

Player for the Future- Odhran McIntyre

Player of the year - Zach Wright

Player of the year - Cathal Farrell

Player of the year Matthew Murphy