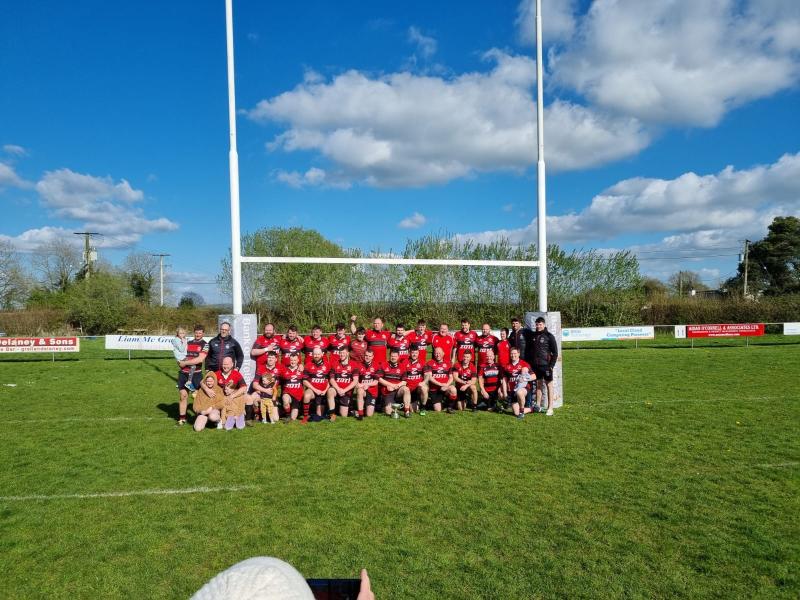 A sunny Sunday in April and cup silverware to be won in a final hosted by Portlaoise RFC brought a fitting conclusion to Tullamores rugby season, the cup fairytale concluding in a well deserved 10 point win for a Tulliers team that played some memorable stuff between occasional moments of loose, undisciplined rugby that gave Athy a foothold in a game that should have been wrapped up a little sooner.

There was more than a whiff of Towns cup nostalgia about the whole thing, the majority of this squad having been part of the glory years of 2012/13 when Tullamore did the domestic junior rugby quadruple.

Playing into a stiff easterly breeze, Tullamore needed to keep the ball tight and in hand to gain traction up the pitch as kicking wasnt much of an option. Kevin Browne, Jonah O'Keefe, Tiernan Mealliffe and Eddie Brady were given the task of carrying into the wind and they accepted the challenge with aplomb, rumbling into action and providing platform to nippy backs Colin Hughes, Odhran McIntyre and Colin Draper. One such phase resulting in a slashing move where eventually the Athy defence ran thin and Tiernan Mealliffe crashed over for the first score of the day. Deverell converting for 7 to 0 after 15 minutes.

Tulliers were hungry for more and spurred on by Shane Minnocks tenacity at the ruck, Glen Bagnall nipped in for a turnover and suddenly Deverell was releasing Tom Gilligan up the short side. With pressure cranking up, Athy conceded a number of penalties and Tulliers had try opportunities  but passes weren't given and tries went a begging.

But back they came and after John Connolly made a fine break Tulliers found themselves inside the Athy red zone.

Shane Brennan was dictating things nicely at 9 and it was he who sniped over from close range off the side of a ruck for Tulliers try no 2 and it was further enhanced to 14 - 0 as Deverell had brought his kicking boots on the day and was kicking like a mule.

25 minutes in and things looked to be going according to plan, but back Athy came and shortly after 30 minutes they ploughed over to reduce the arrears to 7 points after a period of forward dominance.

It was crucial Tulliers didnt concede again before the half time break and some mighty tackles by Ger Molloy, captain James Griffin, Tiarnan Quinn and Aaron Deverell kept the wolf from the door.

With Bagnall lost to injury, Daingean youngster Odhran Hickey lead the lineout challenge on the Athy throw in and disrupted their ball at key moments.

Gasping for air, Tullamore had weathered the storm and made the break 7 to the good but it was still anyones game.

The 2nd half got off on the wrong foot when Deverell was binned for a high challenge but Tullamore didnt panic and managed the 10 minute period well, conceding no points and having lots of the ball.

When Deverell returned, he brought Dave Hanlon and Richie Hughes with him and the lads experience was vital in managing the game.

Deverell made amends for his yellow with 3 well struck penalties to put Tulliers 23 to 7 up and put some daylight between the sides, the next score was crucial in the overall context of the game and it was Athy that struck to bring it back to 23 - 14 after some good carrying by Stu Holland and former Tullamore man Donal Milne.

With 65 minutes on the clock Tulliers struck a decisive blow, Deverell, Gilligan and Hughes made initial break with a lovely set piece move, before Ivan Dunne put burly wing Odhran McIntyre over in the corner. Conversion missed, 28 - 14 and time running out for Athy. In fairness to Athy they kept battling and even when Deverell had blasted over another penalty for 31 - 14 after a mighty James Griffin rumble, back they came and notched another 7 pointer to bring the score to 31 - 21 coming up to time added on.

Tulliers had solid performances all round but Tiernan Mealliffe was deemed player of the day after a mighty effort of grit and determination in the back row.

So the curtain comes down on what overall was a very positive season across the mens section, the silver lining of todays cup win leaving a feel good factor going into the summer recess.