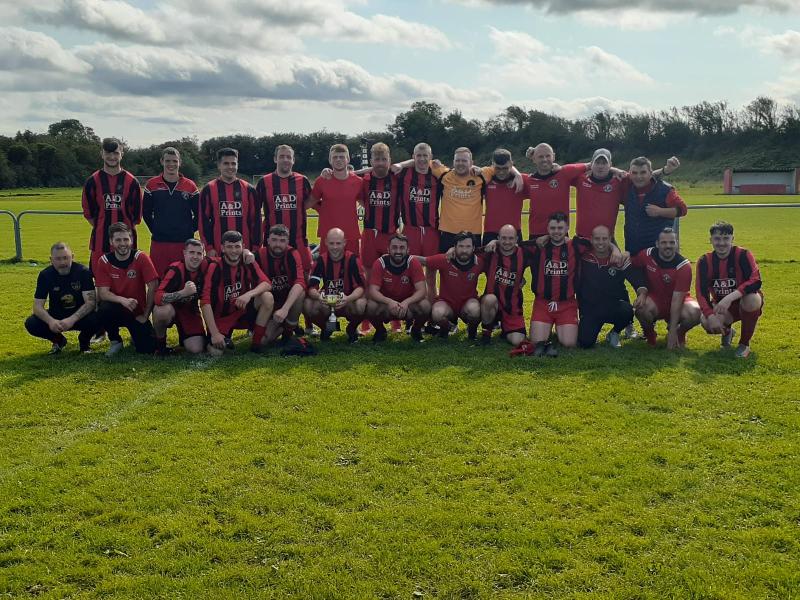 The Coolraine team which won the club's first ever silverware

Coolraine raced into a 3-0 lead, courtesy of a hat-trick from the on-fire Pa Cosgrove, fresh from a four-goal haul against the same opposition last Wednesday at Leah Victoria Park in a 7-0 rout.

That victory clinched the Offaly club's promotion to Division One of the CCFL, and with the team playing with such confidence, there appeared no way back for Temple Villa.

All three goals that Pa scored in the final were the results of wonderful crosses from Paul Kinnarney, Dean Berry and Dylan Murray and those strikes put Coolraine firmly in the driving seat.

However, some errors allowed the Westmeath side back in to the contest and somehow the 3-0 lead evaporated.

Temple Villa came roaring back in the second half of normal time with goals from Sam Nolan, Anthony Allen and an own goal.

Coolraine were now facing into extra-time as the management team rallied the troops and reminded them of their chance to make history for the club.

Neither side could break the deadlock in the first period of extra-time and the match looked to be heading towards the dreaded penalty shoot-out, though Dean Berry and Jamie Hensey went close to re-establishing Coolraine’s advantage.

As the clocked ticked towards the end of the second period, Hensey popped up two minutes from time with the priceless winner from a cross from Jordi Daly.

This sparked off wild celebrations after the final whistle as the players and supporters realised what they had just achieved and removed the shadow hanging over the club for 42 years, and many a tear was shed from the ex-players there to support the team.

The team’s fitness levels were remarkable as this was their third game in a week and as Temple Villa slowed the tempo in extra time, Coolraine were determined to increase the pressure in pursuit of the cup and were rewarded for their hard work and commitment during this elongated season.

Coolraine now have a squad which provides options in all positions and their enthusiasm, along with the hard hours put in at training in Durrow in all kinds of weather, was impressive given how many fixtures were postponed due to the Covid-19 virus.

As always, the management team are on the lookout for new players who are prepared to train hard and match the commitment of the existing squad members.

Paul Kinnarney was an inspired signing by manager, Paul Kelly, and he has formed a lethal partnership with Pa Cosgrove and Mickey Feery up front, terrorising defences and almost telepathically knowing where each player will be.

Coolraine had a near full squad to pick from, missing only the consistent and influential Eddie Keenaghan.

It was unanimous that man of the match was Pa Cosgrove and the club now looks forward to next season in Division One.