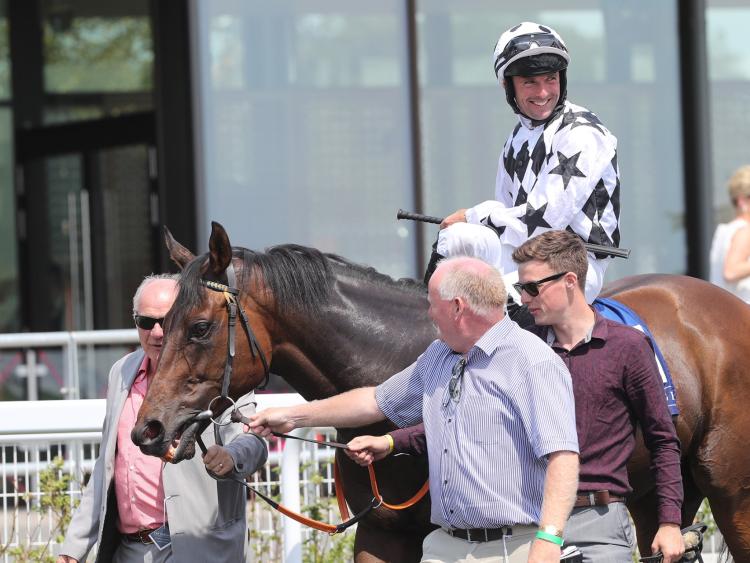 Midlands jockey looks ahead to the Galway Races

They say it’s best to stick with horses for courses and if the same can be said for jockeys, then Athlone rider Rory Cleary could be the man to follow at next week’s Galway festival.

Like all athletes, many jockeys spend their careers chasing titles, whether it be champion apprentice, champion jockey or leading jockey at this big meeting or that.

Leading jockey at the Galway Festival is one such award, and for most jockeys it takes years before they achieve this feat and for many the dream never turns into a reality. Back in 2004, however, Rory Cleary showed no patience for waiting and went and won the title on only his second attempt. He’s back west this week chasing more of that feeling.

His father, Tom, is the Athlone trainer enjoying plenty of success already this season, and Rory has of course ridden several winners for him at the Galway Festival over the years. While he doesn’t think there will be many horses making the journey from Athlone to Galway this year, he is looking forward to a book of exciting rides for trainer Damien English and is hoping a winner may be among them.

“I’ve a handful of rides for Damien,” Rory says with enthusiasm. “They’re hardened, seasoned handicappers and hopefully they will go and run their races like they have been doing all year. One of them might just cross the line in front.”

Born and raised in Carrick-O-Brien, Athlone, surrounded by horses, it was only a matter of time before Cleary was bitten by the racing bug. He started young and began on the pony racing scene at the tender age of nine. It didn’t take him long to make a name for himself, winning champion junior rider five times, as well as being crowned champion senior rider.

He rode his first winner on a racecourse at 16 years of age, so it was clear from an early stage that Cleary had huge potential. However, winning leading jockey at the Galway Festival just short of a year later is something even the most ambitious of young riders can only dream about. Despite his young age, Cleary made sure he lapped it up.

“It was a great year that year – you’d always realise how special it is, especially when you’re younger and you’re riding against all the older and more experienced riders. You idolise them and it’s a great achievement to be able to win races and beat them in finishes.”

Rory is no longer living in Athlone; work means he now bases himself in Kildare. Here he is closer to the trainers he rides out for, mainly Jim Bolger and English. He is enjoying a good season this year, with a winner at the Curragh on Irish Derby weekend being one of the highlights. In fact just recently he was listed by Timeform, the sport’s leading data analyser, as one of the five most improved jockeys of 2018.

“Things are going well and I’m lucky in that I’m very light and never had to worry about my weight,” he explains. Injury-permitting, he could keep riding for another ten years or more but he is keeping one eye on the future. Asked whether he would have any ambition to follow in his father’s footsteps one day he says: “In time I would love to train a few but on a small scale. As it is I pre-train a few and help out a bit at home as well so”.

For now he will keep his eyes firmly focused on the road west, Galway here he comes.