They continued to claim serious success 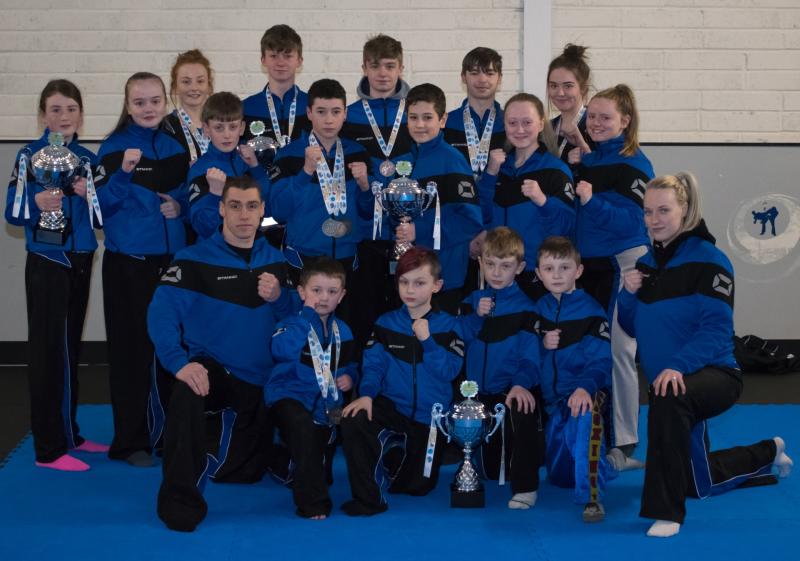 The Beast from the East and Storm Emma may have shut down most of the country, but Team Hurricane managed to make it to Citywest to take part in the event, which in itself attracted teams from all over the world.

The weather did take its toll as the list of 3,800 entries dwindled to 1,500 by showtime on Saturday last, March 3. The tales of participants from all over the world and their journeys were incredible with Team Guatemala diverted to Brussels, then to Shannon and all the way to Dublin on the snow-covered roads.

This was testament to the importance the worldwide WAKO kickboxing family place on this premier event in the sporting calendar.

Team Hurricane managed to hold their own with the worldwide competition to finish 10th in the medal table of 201 clubs in attendance from 23 countries. The Edenderry based club claimed 5 Gold, 7 Silver and 8 Bronze medals

They enjoyed a team victory in the Older Cadet (U15) event, making them the first team from the Edenderry club to win a team event and in fact the first Irish team to win an Older Cadet team event at the Irish Open.

This Team was always destined for greatness with all members, Leah Grant, Nathan Tait, Luke McCann and Dylan Whelan, having won individual titles over the previous three years. The team event was not weakened by the numbers attending as America, Canada and Italy all taking part.

Team Hurricane got a bye to the semi-final in this event and were matched against the fancied Italians but with all four
Offaly fighters putting on a fine display, the Italians were dispatched on a score of 18 to 14. The surprise package from Celbridge (CKA) had magnificent wins against the Top Ten USA and Team United from Canada, however they couldn't cope with the power of Team Hurricane in the final and Nathan Tait was last up and made no mistakes as the Offaly/Kildare team took the title in style, winning 20 points to 15.

There were plenty of other medals for the team on Saturday with club Sensei Jay Daniels taking silver in the -74 Kg section, and Nathan Tait taking silver and bronze in the Junior and Senior -57 Kg grades. Saibh Kelly also won silver while Lauren Grant took a bronze in their events.

Sunday came in with a bang and a gold early on for Ahmed Abourezk followed by titles for Matilda Ferriday and Reka Cummins. The medals kept on coming; Tyler Fetherston with two bronze, Alex Keyes with a bronze and another silver for Saibh Kelly in the KATA section.

Finally Brandon Tait fought his way to the Junior Grand champion semi-final before going down by a single point, but he claimed another bronze nonetheless.

The remainder of Team Hurricane gave their all on the mats and fought to the very end but there were no medals this time for
Claire Brennan, Shane Farrell, Rhys Ferriday, Ales Gillen, JJ Hurst, Ross Keyes, Orla McCann and Aoife Reilly.